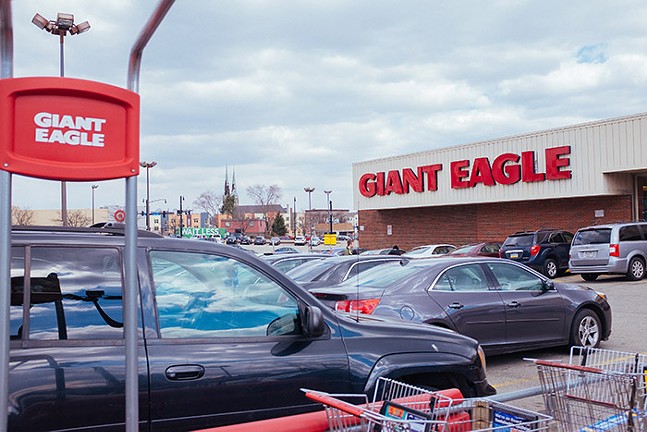 CP photo: Jared Murphy
The Shakespeare Street Giant Eagle
Parking is a touchy subject in Pittsburgh. Some argue, including the Pittsburgh Post-Gazette editorial board, that the city is losing too many spaces with little evidence to back up their claims.

But near the East Liberty Busway station, advocates have the opposite pitch: less parking so there can be more housing.

The site of the Shakespeare Street Giant Eagle is currently proposed for redevelopment by Echo Realty and the group is hoping to transform the shopping center into a walkable, mixed-use site that provides amenities and dense housing all within easy access to public transit. This will include 232 apartment units, a new Giant Eagle grocery store, and other retail.

However, advocates think that the site could accomplish even more of these mixed-use, walkability goals if there weren’t so much land proposed as parking spaces. On Sept. 10, the Pittsburgh Planning Commission approved preliminary plans for the site that includes 492 off-street parking spaces.

This number was reduced from 550 parking spaces in the initial plans. Echo vice president Phil Bishop said this was accomplished by asking the city to lower the minimum-parking requirements for the site. Zoning currently requires newly constructed housing in Shadyside (where the Shakespeare development is located) to have one parking space for every one housing unit. Bishop said Echo is asking for that requirement to be lowered to 0.8 parking spaces for every one housing unit.

“Tenants want parking spaces, but at the same time, we don’t want to build something that no one uses,” said Bishop at an open-house meeting on Monday in Shadyside.

Bishop said Echo decreased the number of parking spaces due to concerns raised by people at a previous meeting.

But advocates like Kevin Joa think the 492 spaces is still far too many. Joa is a Port Authority bus driver and board member of Pittsburghers for Public Transit. He says that the East Liberty Busway station, which is located right next to Shakespeare development, has buses constantly picking up and dropping off people. And that means people arriving and leaving the area without a car.

“This stop is not like Tarentum where there is like one bus an hour,” says Joa. “There are tons of buses here.” 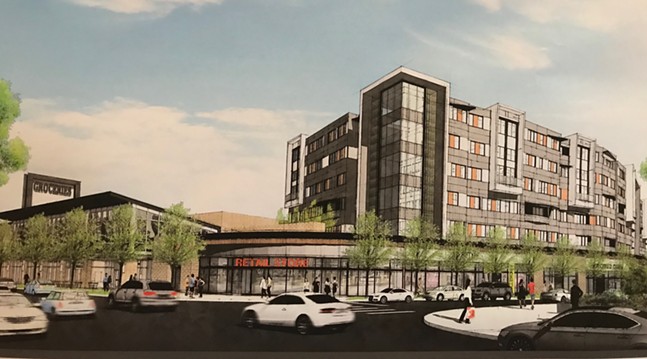 CP photo: Ryan Deto
Drawing of proposed Echo development at Shakespeare Giant Eagle site
John Clarkson of Greystar Real Estate Partners, who is working on the apartments for the proposal, acknowledged that over time, places in Pittsburgh should build projects with less parking, but said that currently demand encourages more spaces.

“We don’t want to build more parking,” said Clarkson. “But right now, I would argue here that we need parking for this project.”

He said that Greystar has completed projects in Washington, D.C. near rail lines that only required 0.2 spaces for every housing unit. Clarkson added that he doesn’t believe this Pittsburgh location is comparable to that.

However, ridership figures show that East Liberty Busway station is one of the busiest transit stops in the region with more than 4,200 combined on and offs per weekday. This actually exceeds the amount of weekday on and offs at the First Avenue light-rail station Downtown. Not to mention the more than 2,500 average weekday on and offs that other bus stops near the Shakespeare Giant Eagle bring in.

In total, more than 6,700 people either get on or off the bus within a four-minute walk of the Shakespeare development.

About 17 percent of Pittsburgh residents use public transit for commuting, which is the 18th highest of any city in the U.S. The East Busway carries about the same riders as Port Authority’s red and blue light-rail lines combined, about 24,000 per day.

This is why Pittsburgh City Council candidate Randall Taylor thinks that Echo should request more zoning variances to allow for less parking. He says less parking could mean more affordable housing on the site, that would allow low-income residents to live without cars.

“We need more housing in East Liberty because this location is next to public transit,” said Taylor at the Monday meeting. “To build luxury housing next to a busway stop is lunacy.”

The Shakespeare development is technically located in Shadyside, but it is right across the border from East Liberty, which has lower parking requirements of one parking space for every two housing units. Pittsburghers for Public Transit recently published a paper showing that if Echo applied for a variance to follow East Liberty zoning guidelines, then the development would only be required to build 258 parking spaces.

The PPT paper said the money saved from building parking spaces could total about $4.6 million, which could be used to build more affordable units and/or supply residents with transit passes. A 2014 UCLA study shows that above-ground parking garages as required by parking minimums increase the cost of the average U.S. project by 31 percent.

A full planning commission hearing will be held in October. If approved then, Pittsburgh City Council will hold a public hearing and then a vote likely in November or December. Bishop of Echo said current plans are not final, and the developers are still having a dialogue with the city.

“Wherever this ends up, we will see,” said Bishop.