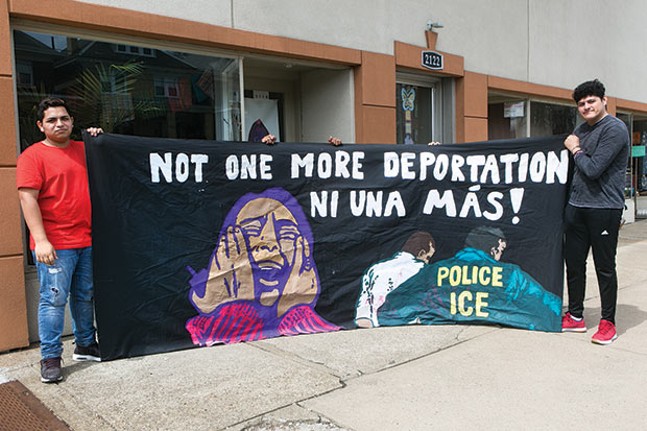 CP photo by John Colombo
Members of immigrant-rights group Casa San Jose have used this sign to protest increased ICE enforcement in Pittsburgh over the years.

Since January 2017, when President Donald Trump was inaugurated, 20 undocumented immigrants have been prosecuted in Western Pennsylvania federal courts for immigration offenses, most for illegally entering the U.S. multiple times.

Of those 20, only six immigrants had criminal records in the county where they were detained. The charges include DUI, illegal-firearm possession, and having false identification. Only one, Mexican immigrant Rolando Velez Latorre of East Pittsburgh, had a conviction for a violent offense (simple assault and making terroristic threats in 2014).

But this hasn’t stopped the Immigration and Customs Enforcement (ICE) from increasing enforcement nationwide since Trump was elected. ICE has even increased detainments in some Rust Belt areas, such as Allegheny County, which tend to have smaller percentage of immigrant residents than the national average.

In response, a growing chorus of progressives and immigration advocates are calling for defunding and even abolishing ICE. They claim ICE isn’t making communities safer and is forcing immigrants to live in a constant state of fear. ICE has defended its actions and says agents are targeting criminal immigrants. But one longtime immigrant lawyer, Cleveland-based David Leopold, says ICE’s increased enforcement, especially in the Rust Belt, goes beyond enforcing current laws and is meant to showcase a broader hostility toward immigrants.

Pennsylvania advocates agree. “I think it is about politics,” says Sundrop Carter, of Pennsylvania Immigration and Citizenship Coalition (PICC), a statewide immigrant-advocacy group. “I think ICE is purposely going after places where immigrants used to be invisible. If they are coming after immigrants in a small town like Gettysburg, where they have to drive around and look for immigrants, then it spreads the feeling that no one is safe.”

Monica Ruiz of Casa San Jose, a Brookline-based immigrant-support service group, has been working with Pittsburgh’s undocumented community for several years. She says ICE’s increased enforcement creates the perception that all undocumented immigrants in Pittsburgh are being targeted for deportation. According to statistics compiled by Syracuse University, ICE’s 2017 Allegheny County detainments increased by 15 percent from 2016.

Ruiz says she supports defunding ICE, not only to stop sweeps of Pittsburgh neighborhoods, but also to continue the momentum of immigrants moving to and investing in Pittsburgh. According to a 2016 study from the New American Economy, a pro-immigrant business group, immigrants made up 7.6 percent of Allegheny County’s gross domestic product, even though foreign-born individuals only comprised around 5 percent of the county population.

“[Immigrants] aren’t going to invest in the community, because they don’t know how long they are going to be here,” says Ruiz.

Leopold agrees that increased immigration enforcement will hurt the economies of Rust Belt cities like Cleveland, Youngstown and Pittsburgh. But, he says, immigration hawks like those working for Trump are driven more by ideological factors than economic ones.