CP Photo: Jared Wickerham
MAN-E poses for a portrait on the South Side on Sat., Jan. 9, 2021.
MAN-E was 16 years old when he was first arrested. While he wasn’t found guilty of that charge, he and his family still suffered consequences. MAN-E, who uses a pseudonym but provided Pittsburgh City Paper his legal name, says the bail set from that charge was $25,000. He says he was fortunate enough that his family could raise enough money to secure the funds through a bail bondsman, but his family still had to forfeit a percentage — thousands of dollars, in this case — to the bondsman.

MAN-E, who is part of the BUKIT Bail Fund, a local collective of volunteers who raise money "for supporting the release of incarcerated individuals and the campaign to end cash bail,” according to its website, has been charged three other times since, and each time was given a cash bail. Even though he was never found guilty of these charges, and some were dropped by prosecutors, he says he still had incurred more than $100,000 in total bail. That means he either has to hold large sums of cash to provide to courts, which will then be refunded once he appears for his hearing and/or trial, or he has to provide a percentage or that to a bail bondsman, who will then make the bail payment.

“In one case, my mother had to put our house up to a bail bondsman, and if I didn't show up to the court, then they could take her house,” says MAN-E.

This system of cash bail is common in Allegheny County, and in most of the United States. The justification of assigning large sums of money bail to the accused is to encourage them to return to trial and hearings. If they don’t show up, they forfeit the money and an arrest warrant is issued. If bail is not met, the accused are incarcerated in the Allegheny County Jail, which, like many jails, has documentation of unsafe conditions. This happens even if a person is eventually deemed not guilty or charges are dropped. MAN-E says he has spent a total of a few weeks in jail, even though he has never been convicted of any crime.

Cash bail is not just assigned to people accused of serious crimes. This summer, cash bail was often assigned to Black Lives Matter protesters, who were largely charged with misdemeanors like disorderly conduct or failure to disperse. According to the Pittsburgh Post-Gazette, 32 protesters were ordered to pay 10% of a cash amount between $1,000 and $5,000, and eight were required to pay 10% of $10,000, in connection to arrests in summer 2020.

Criminal justice advocates have been trying to end the use of cash bail for years, and efforts have been successful in some states and jurisdictions. According to the Brennan Center for Justice, those held for pretrial are four times more likely to be sentenced to prison than defendants released prior to trial, due in part to defendants making hurried decisions to plea to lower charges just to get out of jail.

Those who can’t make the cash payment risk being exposed to the negative mental effects incarceration can have on individuals, and the subpar mental health care provided at jails.

On top of that, some studies show that cash bail has little to no effect on court appearance rates or public safety. Academics at the University of Pennsylvania analyzed Philadelphia data in 2018, and showed that failure-to-appear rates and arrests didn’t increase after cash bail was not assigned.

Advocates in Pennsylvania have tried to get county District Attorneys on board, tried to get the state legislature to pass laws, and other noble, yet difficult, efforts. But there are other, arguably, more direct levels of advocacy here in Pittsburgh and Pennsylvania’s second largest county.

In Allegheny County, bail is set by a Magisterial District Judge at a preliminary arraignment, often before prosecutors are involved. That means Magisterial District Judges have discretion in how they set bail, and this relatively obscure public office can actually have the power to end the use of cash bail entirely. With about 20 magisterial district judges races on the ballot this year, a lot can change in districts across Allegheny County. 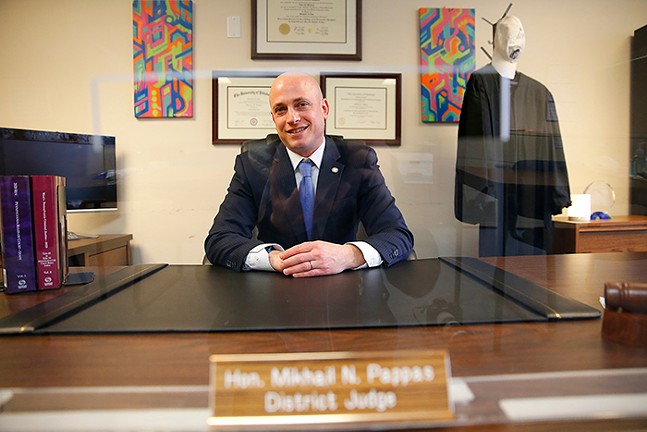 CP Photo: Jared Wickerham
Judge Mik Pappas poses for a portrait inside his East Liberty office on Thu., Jan. 7, 2021.
“I would want to see the judges or people in power openly acknowledge that cash bail doesn’t work and that it criminalizes poverty,” says MAN-E. “It’s not based on public safety, it is only focused on finances.”

The criminal-justice advocacy group Abolitionist Law Center tracked how much cash bail was assigned across districts after Clark’s request. Eleven judges complied and eliminated using cash bail in the aftermath of the meeting, but most didn’t. Some lowered their average amounts of cash bail issued, but 13 judges actually increased how much they used cashing bail, on average.

“The left hand doesn’t know what the right hand is doing,” says Autumn Redcross of ALC. “We get to see the randomness of bail hearings from judge to judge. There are some that just charge higher bails than others, that is part of the arbitrariness of this and part of the problem.”

This arbitrary nature has disproportionate effects on Black people in Allegheny County.

According to an ALC report that tracked court reports from May 11 through June 8, 2020, just nine zip codes with a disproportionate Black population accounted for 38% of the dollar value of all monetary bail bail issued in Allegheny County over that period. Only about 13% of Allegheny County residents are Black.

According to 2015 statistics from the Bureau of Justice, an estimated 450,000 people are sitting in jail awaiting trial on an average day, mostly because they can’t afford bail. In Allegheny County, a large plurality of inmates in the jail are held because of parole/probation violations, another issue advocates want to reform.

A much smaller percentage of Allegheny County inmates are held solely because they can’t pay cash bail, says Redcross, but she believes the practice is still overly punitive.

“If they want to take responsibility for those in jail, then the cash bail system makes no sense,” says Redcross. “What are we protecting?”

Redcross says many local judges have been using “unsecured cash bail,” which means defendants don’t have to provide money upfront, and only have to pay if they fail to show up to their court dates. She says unsecured cash bail is a stepping stone and a good thing, but it is not the ultimate goal.

She says a more effective, and fair, method to get defendants to meet their court dates is just providing resources to remind them. Redcross says ALC and other advocacy groups have been dedicating efforts to do just that, providing text and mail reminders of court dates, but she says the county or the courts could be doing this, too.

“There is no system to remind people about their hearings. A lot of people that there are warrants for them, had no idea,” says Redcross. “They might be housing insecure, don’t receive mail, or they just forget.” 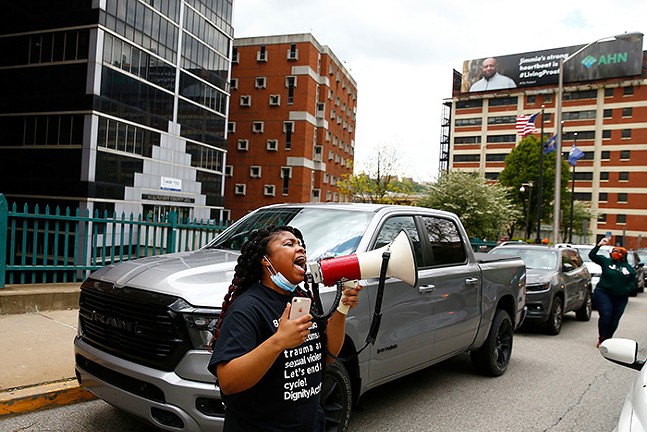 CP Photo: Jared Wickerham
More than twenty cars blocked Second Avenue outside of the Allegheny County Jail as people protested conditions for Black women, calling for the release of inmates and ending the use of cash bail on Tue., May 12, 2020.
City Paper listened in on one arraignment session on Jan. 6 in an Allegheny County magistrate court. Out of five defendants seen over less than an hour, only one was assigned cash bail: 10% of a $25,000 bond for summary and misdemeanor charges. Others were assigned unsecured cash bail. For the majority of the defendants, there wasn’t a lot of dialogue between them and the judge. The judge didn’t explain to most defendants why he was assigning the bail, and mostly just read off the charges and the defendants’ upcoming court dates. For one defendant, who can be heard audibly yelling before seeing the judge, the judge did calmly, and thoroughly, explain why he was setting three separate unsecured cash bonds of $1,000 each.

“This is just a formality, you are going to get released today, just be quiet and listen,” said the Allegheny County judge on Jan. 6.

One Allegheny County magistrate judge who says he has eliminated cash bail in his district is Mik Pappas. He has served since 2018 in District 05-02-31, which comprises several East End neighborhoods in the city of Pittsburgh. Pappas says there are some fixes that Magisterial District Judges can do to eliminate cash bail, and still assign conditions that defendants must meet to address any public safety concerns.

“There are a variety of options out there,” says Pappas. “Because of the unsecured bail option, do we really need professional bail bondsmen at all? … They want to know that a community is going to be safe. I think if there were more options in place, than they would be willing to listen.”

During his 2017 campaign, he openly ran on eliminating cash bail, and he believes other candidates can too. He says large foundations, like MacArther and Heinz, have become increasingly involved in trying to eliminate cash bail. Pappas says large majorities of Americans back criminal justice reforms and believe that rich Americans get better outcomes in courts than the poor.

“We have a responsibility to report to the public,” says Pappas. “When I think of how much we rely on incarceration and arrest, and I see how much it impacts people’s lives, we need to think of opportunities of diversion.”

Pappas says he has relied on several different strategies to divert defendants from cash bail in his courtroom, including community-sponsored release, which provides services like helping to find housing, employment, and rides to court for defendants whose judges determine they might not show up to their court date. The Community Release Project created by advocacy group Silicon Valley De-Bug has been practicing this in Santa Clara County, Calif. and says community-sponsored release has resulted in a non-monetary release or significant bail reduction in 76% of all the cases it reviewed.

He says he can also deny cash bail, so that the bail decision is automatically pushed up to the higher Common Pleas Court Judge, who has more discretion to assign electronic monitoring and other policies that avoid cash bail. Pappas says he will really only assign unsecure cash bail or assign a non-contact condition to a defendant if there are certain risks he assesses, like in domestic violence cases. 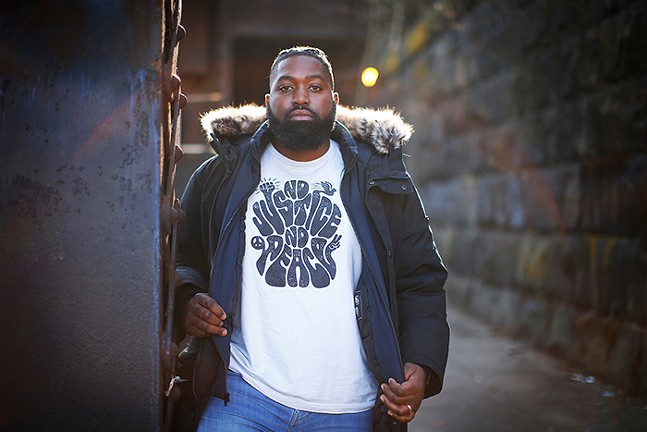 CP Photo: Jared Wickerham
MAN-E poses for a portrait on the South Side on Sat., Jan. 9, 2021.
MAN-E says it’s crucial for magistrate judges in Allegheny County to do everything in their power to keep defendants out of jail, and hopes eliminating cash bail is part of that. He says one of his cousins sat in jail for four years before he went to court.

One big issue Pappas says that advocacy groups and foundations could initially fund is getting family members, social workers, lawyers, and/or members of advocacy groups at every preliminary arraignment.

Basically, Pappas uses several different rules afforded to him as a judge to avoid assigning cash bail. This is why he is bullish on judges and candidates following suit. He acknowledges that Magisterial District Judges can often be a mysterious elected office, but he is confident that, with the right advocacy and approach, all can be amenable to eliminating cash bail. It’s just that many are used to the system risk assessment followed by assigning cash bail.

“It is rare for a human being who would see someone in a vulnerable position, and not give that person that chance,” says Pappas.