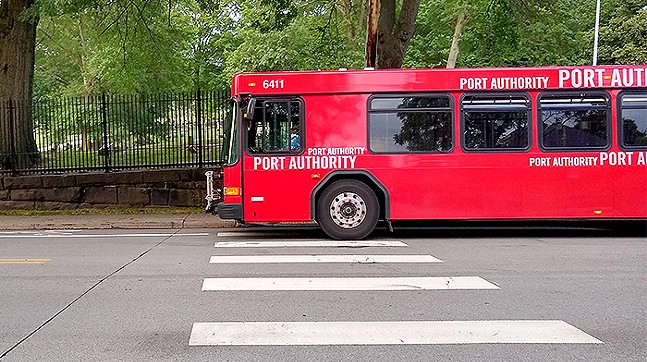 CP photo: Abbie Adams
A Port Authority bus on Brighton Road in Pittsburgh's Marshall-Shadeland neighborhood
A coalition of advocates, transit riders, and residents have objected to the recent fare increase proposed by the the Port Authority of Allegheny County, and the group of over 40 organizations is also calling on the public transit agency to institute free or reduced fares for low-income riders.

The advocates want the Port Authority to implement a pilot program for riders, where they can simply show their EBT cards (aka food stamp cards) while boarding in order to secure a free ride on buses, light rails and inclines. A family of four on food stamps, aka the Supplemental Nutrition Assistance Program, has a maximum monthly income of less than $3,500, well under the median household income for a family of four in Pittsburgh.

Dr. Shannah Tharp-Gilliam is a director at Homewood Children's Village and a leader of the Black Equity Coalition, which represents 12 community organizations throughout greater Pittsburgh. She said in a press release that a program allowing EBT card holders free rides is a “once-in-a-generation opportunity” to see a potential impact.

"It could mean the difference for a family between getting to the grocery store or being hungry ... between seeing a doctor for timely treatment or getting sicker," said Tharp-Gilliam.

Advocates like Pittsburghers for Public Transit have been calling for this program for some time. At a public hearing on April 22, more than a dozen speakers urged Port Authority to implement this low-income fare program.

In a statement before the hearing began, Port Authority CEO Katharine Kelleman said the authority’s proposed fare changes — which would increase ConnectCard fares by 25 cents, but eliminate $1 transfer fees for ConncectCard users — will “provide greater value” to riders who use ConnectCards, according to the Pittsburgh Post-Gazette.

There were 15 speakers during the public hearing, and 13 of them requested the Port Authority implement the free fare program for EBT card holders. Philanthropic groups also came out in support of such a program. In a release, Lisa Schroeder of the Pittsburgh Foundation said her organization supports the program and said it was an “economic and racial justice opportunity.” She added that it might help Allegheny County receive more and fairer transit funding as the state works towards a large public-transit funding bill.

According to the Post-Gazette, Port Authority spokesperson Adam Brandolph said the Authority supports such low-income fare programs, but that the agency doesn’t have the $5 million it could cost a year. Port Authority is set to receive about $250 million thanks to a recent federal COVID stimulus bill, but Bandolph told the Post-Gazette that other agencies that started similar low-income fare programs did so before the pandemic and not with federal money.

The Port Authority is holding two more public hearings: one on April 30, from 9 a.m.-12 p.m, and one on May 4, from 4-7 p.m. Registration required at Port Authority’s website.