“When you throw a trans woman into a men’s prison, she is woman.” 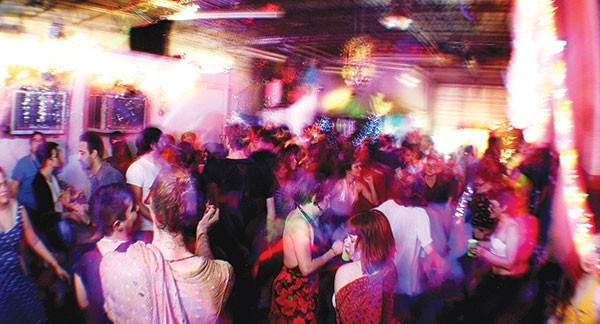 According to a 2014 survey compiled by the U.S. Department of Justice, about 25 percent of transgender prisoners reported being sexually assaulted by inmates while incarcerated. For all other non-trans prisoners, that number is only 2 percent.

It’s this disparity that has motivated the Illegal Queers Collective to raise awareness about the plight of LGBT people who are, or have been, incarcerated. And it is accomplishing that the best way its members know how: dancing.

On Fri., Aug. 5, the collective is throwing an all-inclusive dance-party fundraiser at Salem’s Event Center (formerly CJ’s) in the Strip District from 9 p.m. to 4 a.m.

“It is a fundraiser queer dance party,” says Jayme Jenkins of the Illegal Queers Collective, who identifies as agender. “Our beneficiaries are always trans and queer prisoners who have been disproportionately marginalized by the legal system.”

The party is raising funds for two beneficiaries, Ky Peterson and Ashley Diamond. Peterson, a trans man, is currently serving a 20-year sentence in a women’s prison.

Diamond, a trans woman, was housed for more than three years in a men’s prison and says she was sexually assaulted many times while there, according to The New York Times. Since her release — which came soon after her federal lawsuit against the Georgia Department of Corrections was backed by the U.S. Department of Justice — Diamond has struggled to adapt to society. She hasn’t been able to find consistent work and can’t afford to pay for her parole fees or hormone injections. So far, Diamond has only raised $5,000 of her $25,000 goal on crowdfunding site youcaring.com.

The collective’s last party, in March, raised more than $1,000 each for Susie Moon — a local trans woman struggling to get back on her feet after being released from jail — and trans woman Eisha Love, a former prisoner from Chicago. Daniel Grumer, also of the collective, says more than 300 people attended March’s party. He says this month’s party will also be raffling off artwork from LGBT artists to help raise money for Peterson and Diamond.

But Jenkins says it’s not just about raising money — it’s also about raising awareness. The party will have tables for LGBT- and prisoner-rights groups to inform party-goers. “It’s about getting people to consider their relationship between the state and oppression, particularly gender oppression, racism and violence,” says Jenkins. “... When you throw a trans woman into a men’s prison, she is woman. It leaves people very vulnerable to sexual assault.”

And while this month’s party is highlighting the problems of the Georgia prison system, Pennsylvania has some problems of its own, says Etta Cetera, an activist with Let’s Get Free legal defense, an advocacy group for trans inmates and prisoners in Western Pennsylvania.

“From what I know working with people incarcerated for the last 15 years, trans people are not acknowledged, and [they are] put in prisons that are different than their gender, and often times placed in solitary for their safety,” says Cetera.

But awareness is increasing. The collective’s parties are becoming increasingly popular, and Grumer says they receive a lot of offers to host their parties. Sometimes, however, the group has had to turn down venues that conflict with the collective’s mission of creating safe spaces for LGBT people and allies.

“We are against unwanted sexual contact,” says Grumer. “One of the reasons we are having it at a place that doesn’t already have a dance culture, is that you go to certain spaces and expect certain behavior to be OK. We are creating a new space, and making it a space that is safer for queer and trans people.”

And Jenkins thinks this will only make it better. “We not only want to make it a political thing,” Jenkins says, “but also want it to be the best dance party we have been to.”