“Once Port Authority runs your name, ICE will check that name and can detain you.” 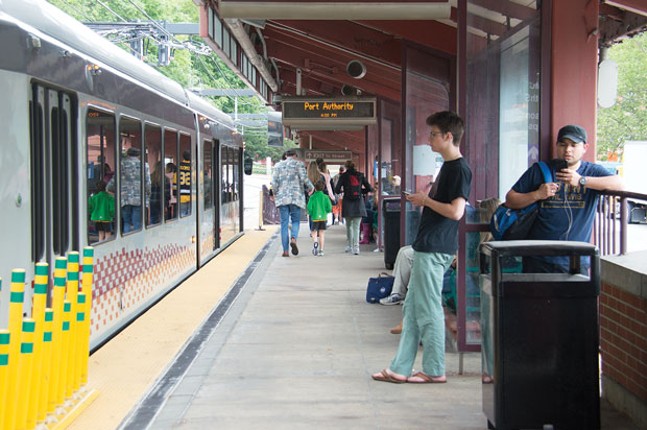 According to statistics obtained by the Washington Post, immigration arrests rose 32 percent in the first few weeks of the Trump administration, compared to the same time period in 2016. In January, Trump signed an executive order declaring that immigrants could be detained merely for committing a criminal offense, even if no charges were filed and the immigrants had no serious criminal history.

The new policy, which Port Authority hopes to implement in August, will have riders pay as part of an honor system. Port Authority Police officers will check riders for proof of payment on light-rail cars and at T stations, run federal background checks on riders who don’t pay, and potentially charge repeat offenders with criminal offenses.

Ruiz is terrified about what might play out because U.S. Immigration and Customs Enforcement (ICE) has access to the same FBI database through which Port Authority Police will run fare-evaders’ names and addresses. She says this means that forgetting to pay a $2.50 fare one time could lead to a deportation. “They are basically turning [light rail] into a border checkpoint,” says Ruiz.

Port Authority says its new policy is about improving the efficiency and safety of riding light rail, as well as helping the Port Authority become more financially stable. The authority says that wording in the policy protects riders’ civil rights, and that transit police have no intention of working with ICE. But a coalition of civil-rights advocates, including Ruiz, say wording in the policy is too vague, and that Port Authority hasn’t provided enough written proof that it’s serious about protecting immigrants. Activists want the authority to alter the policy.

Brandolph points out that the authority’s new fare-check policy states that officers are prohibited from unfairly targeting or discriminating against riders “based on race, color, national origin, immigration status, religious beliefs, physical or mental disabilities, sexual orientation or gender identification.” He says officers will check proof of payment of everyone in the area.

“We hear their concerns, and we have a policy that we believe addresses those concerns,” says Brandolph.

But Ruiz says Port Authority’s written policies may not be enough to ensure that law-abiding undocumented immigrants avoid deportation. “Once Port Authority runs your name, ICE will check that name and can detain you,” says Ruiz.

In May, a Minnesota transit officer questioned the immigration status of an undocumented immigrant who failed to pay a light-rail fare. That officer was fired for violating agency practices, but the immigrant was charged with fare evasion, and eventually detained by ICE. He currently faces deportation, even though the Minnesota transit agency didn’t contact ICE.

Brandolph says there’s nothing in Port Authority Police protocol barring officers from contacting ICE. But Brandolph says it would be violating protocol for officers to contact ICE, and officers who do could face consequences.

Gabriel McMorland, of social-justice group the Thomas Merton Center, says Port Authority’s assurances aren’t adequate. “That is not how you protect civil rights,” says McMorland. “You need to have written policies.”

McMorland wants Port Authority to make its police protocols accessible to the public. He is asking the authority to alter the fare-check policy to have non-police staff check for fares. McMorland hopes Port Authority will make fare-evasion a civil offense where offenders are sent bills via mail, instead of being put into the criminal-justice system.

Brandolph says that at least five other transit agencies across the country utilize transit-police officers to check fares. Cleveland’s transit agency is one of those, and also makes fare-evasion a criminal offense, but it allows violators up to 48 hours to pay their fine as a civil matter and avoid criminal prosecution.