Photo: Courtesy of Jonathan John
Prepared samples for analytical HPLC testing
While you need a special license to sell marijuana in Pennsylvania, anyone can sell Delta-8, a related product extracted from hemp. Vapes, gummies, and products containing Delta-8, sometimes referred to as “legal weed,” are widely available for purchase over the counter because of an oversight in a four-year-old federal law. But advocates for cannabis and legislators agree that Delta-8 needs to be regulated as a matter of public safety, even if they may not agree on how to go about it.

“These products are being sold unregulated in gas stations and corner stores,” says state Sen. Judith L. Schwank (D-Berks). She and state Sen. Sharif Street (D-Philadelphia) said in an April 6 memo that they plan to introduce legislation to ban products that contain Delta-8 THC made from hemp.

But Jonathan John, a chemist and the CEO of Circus Cannabis, a site selling Delta-8 products, says prohibition is not the answer.

“People use it because it’s effective and cost-effective, it’s not just people who want to get high,” says John. Pennsylvania’s medical marijuana market is extremely non-competitive, he adds, and not everyone who needs medical weed can afford the cost of a patient card and the high price (compared to other states) of products sold at legal dispensaries. Delta-8, he says, serves as a cheap alternative.

“What will happen is a lot of illegal activity — a ban would basically overnight say all these shop owners, all these producers are creating an illegal product,” says John. 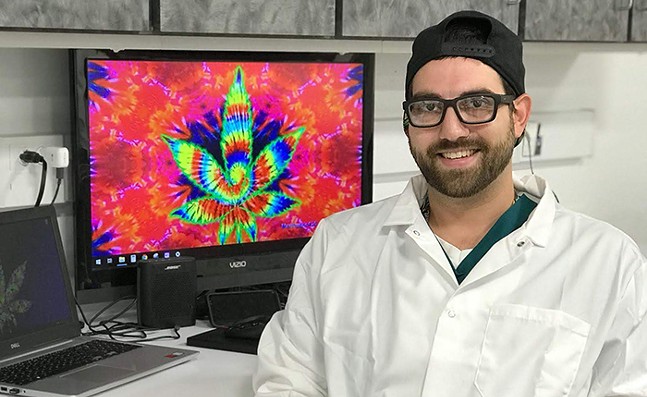 Photo: Courtesy of Abby B. from Cannabrand
Jonathan John, cannabis chemist
The 2018 federal Farm Bill made it legal to grow hemp as long as the plants didn’t have high amounts of Delta-9 THC, the molecule in marijuana that gives the user a high.

But the legislation doesn’t cover the other forms of THC that many hemp plants might contain, including Delta-8. So while only licensed marijuana dispensaries can sell products with Delta-9 THC, products derived from hemp with Delta-8 can be sold over the counter anywhere in Pennsylvania.

While John is wary of legislation that might impose an outright ban on Delta-8, he agrees that it needs to be regulated. Because with no oversight, it’s like a street drug — the user doesn’t know what might have been added to it in the refining process. Since cannabis plants produce so little THC, they have to be refined to get CBD, which is then converted into Delta-8. During that process, someone who doesn’t know what they’re doing could add whatever they wanted to create vapes or edibles with Delta-8.

That’s why, according to John, Delta-8 products need to be tested in a reputable, accredited lab to test for harmful additives.

And, he notes, an outright ban would have a serious impact on hemp farmers in the state. Under the same 2018 Farm Bill that created the Delta-8 loophole, Pennsylvania became one of the first states to create a commercial hemp growing program. In 2019, 324 hemp growers received permits to sell hemp across 4,000 acres in 55 counties, according to the state Department of Agriculture.

Schwank stresses that the legislation hasn’t been written yet, and they plan to gather more information, but she doesn’t want any bill to be punitive.

“I was a leader in helping to get hemp on to be a legal crop grown here in the commonwealth,” she notes. “I wrote the first Senate bill to introduce it in 2016. I’m a supporter of hemp. But I’m anti-poisoning people.”

Multiple U.S. states have banned Delta-8, but Holly Teegarden, owner of Sewickley CBD store Moodporium, formerly House of Oils, hopes Pennsylvania isn’t next on the list. Teegarden has started an online petition, “Help Stop Pennsylvania Senate From Banning Delta-8,” stating that the ban would not just “cripple hemp farmers, processors, CBD store owners, and other retail shops that heavily rely on the sale of these products. But the people who would most be affected are the customers that use products with Delta 8 for PTSD, chronic pain, depression, anxiety, opioid addiction, alcoholism, and many other ailments.”

The way Schwank is thinking about it, she says, is that it should be sold legally, with labeling that lets users know exactly what’s in it. “I have a great interest in hemp as an agricultural crop. But so far, we’ve tried to approach this issue in a scattershot way. That needs to change.”