A boy's politically charged fib opens a Pandora's box of ideas and emotions in the latest from Atom Egoyan. 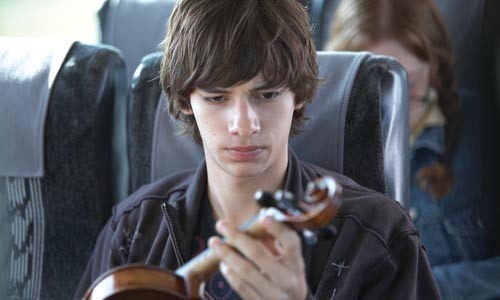 An instrument for discussion: Devon Bostick

Atom Egoyan, the lugubrious Canadian artist, has always required patience, but as his work deepens and matures, he's become worth the wait.

His new drama, Adoration, is a companion piece to his even better earlier one, Ararat, and the two share themes, motifs and sensations. Each deals with history, both personal and political, and each tells its story through the intellectual journey of a young man trying to comprehend. They're both intimate and impassioned films from their characters' points of view, and that angle draws us into their passions.

Adoration centers on Simon (Devon Bostick), a high school kid raised from age 8 or 9 by Tom (Scott Speedman), his disillusioned uncle, after his parents died. His mother was a violinist, his father a violin-maker and a Lebanese immigrant whose intractable father-in-law hated him and challenged him at family gatherings.

During an exercise one day in French class, Simon's teacher (Arsinée Khanjian) reads a story about a pregnant woman whose terrorist husband persuades her to take a bomb on a plane. (Why the teacher chose that essay is, like every other choice in the film, both personal and political.) The assignment is to translate the text, so Simon does it from the point of view of the child who's born after the woman gets caught at customs. His teacher, impressed with the work, persuades him to adapt it for a presentation in her drama class.

But Simon's classmates think it's literally about him, and he doesn't deny it, which stirs discussion, among the kids and then some adults, in several video chat rooms. Simon even joins them online, making up answers to their questions. Should they forgive Simon for not sharing his family history sooner? Should they pity him or hate his terrorist father or share his guilt? It's a way of engaging that brings people together while keeping them apart, and it allows them to drop bombs of their own without really having to confront the destruction.

"We buy Nikes because we think we're gonna look cool," one girl says. "He wanted to blow up a plane so he could have 40 virgins in the afterlife." And another: "We're victims of our circumstances and that's the norm. So there's nothing out of the ordinary about how the father was raised." And another: "Is it any worse for us to be so overindulgent and to let people die who have no money than actually killing them ourselves?"

And who is the woman in the burka -- her facial covering adorned with dangling silver beads -- who stops by the house one night as Simon and Tom put up their Christmas lights? She says the Jews killed Jesus, then comes back a few days later to apologize, and to discuss faith and identity with Tom, who tells her, in so many words, that he couldn't care less about her struggle to be openly Muslim in a Judeo-Christian country.

Egoyan (The Sweet Hereafter) unravels a multi-layered mystery in Adoration that's at once emotional, psychological and historical. He tells it in four or five different time periods, moving freely between them, and filters it through three generations: Simon's belligerent grandfather, who died a few months earlier; his uncle, who the grandfather says is angry but who seems stupid to some people, because "anger sucks up a lot of intelligence"; and the high school kids, a loquacious and lenient generation who are understanding when they need to be judgmental, especially of themselves.

As in Ararat, Egoyan's weave of story, idea and character is inseparable, and it effects a riveting and relevant piece of cinema in our perilous post-9/11 world. His puzzle challenges you to listen to every word, and if his characters seem to speak with too much insight, it's only because they're well read and well educated (this is set in Canada, remember, not the U.S.).

The third act of Adoration hinges on a coincidence that feels a bit too contrived, and it brings the drama to a resolution that's more emotionally than intellectually satisfying. I suppose that's a quibble, but only because I wanted Egoyan to surprise me more honestly. Simon's Internet stunt draws out neo-Nazi Holocaust-deniers and tattooed survivors, and the authorities begin to scrutinize him because of it, for these are times in which we have to watch what we say. Was Simon's faux father a coward for not blowing up the plane himself and dying a martyr? One young Timothy McVeigh wannabe says there's no greater satisfaction than being alive to see the havoc you've wreaked. He's talking about all of us, from artist to terrorist, and -- if there are any -- all points in between.