Adam Welch offers a solo show that looks like a group exhibition.

It's a gallery-filling spectacle of impressive scale and scope. 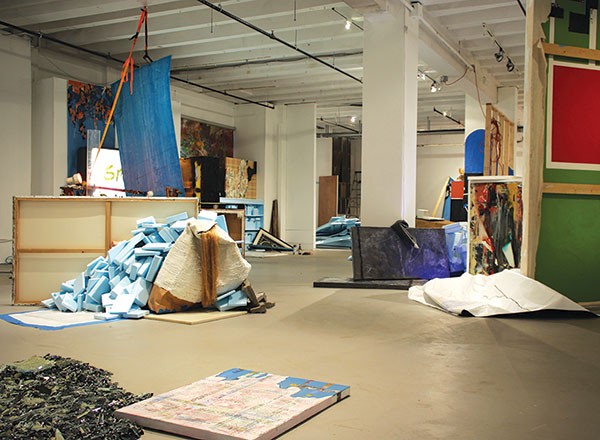 Adam Welch's is the first solo exhibit in the recently opened The Mine Factory, a gallery located in a building housing artists' studios across from the East End Food Co-op. The exhibit's title, Terminal Moraine, describes the debris deposited at the end of a glacier; here, it refers to the finished and unfinished artworks created and accumulated by Welch during his decade-and-a-half-long journey as an artist.

Welch is primarily known in the art community as the curator at Pittsburgh Filmmakers/Pittsburgh Center for the Arts (where he was also Emerging Artist of the Year in 2008, before being appointed curator). This exhibit fuses the roles of artist and curator, using strategies of juxtaposition and combination to create a new gestalt. At a glance, the exhibit looks as if it could be a group show. It incorporates new, repurposed and reconfigured paintings, drawings, sculptures, projections and assemblages ranging from the abstract to the representational to the ready-made. Together, they're presented as a total work that's akin to installation art.

There are materials and subjects that recur: diagrammatic imagery, building-construction scraps, shelves filled with Welch's signature Styrofoam book forms. But the overall effect is one of fragmentation. Semi-random clusters and conglomerations of artworks and other objects scatter our attention, rather than focus on an essential theme. Whatever it may be, this is not a conventional survey or retrospective; there's not a chronology, title or date in sight. Rather, it's a gallery-filling spectacle of impressive scale and scope — in effect, a labor-intensive arrangement that reuses Welch's artworks, employing a freedom no curator would be permitted, except that here the artist is acting as curator of his own exhibit.

Experimentation is emphasized, and ambiguity abounds. Should we consider components as finished works, individually or together? Does piling one piece atop another constitute a new sculpture, or is it a fleeting juxtaposition? There is a consistent sensibility throughout, at once committed and casual. While larger themes, such as transformation or the uncertain nature of perception, are suggested, the installation is more evocative than communicative, open to interpretation without pointing in a specific direction. An artist's talk at 6 p.m. on Aug. 8 should illuminate the artist's process and intentions, followed by a closing reception from 7-9 p.m.