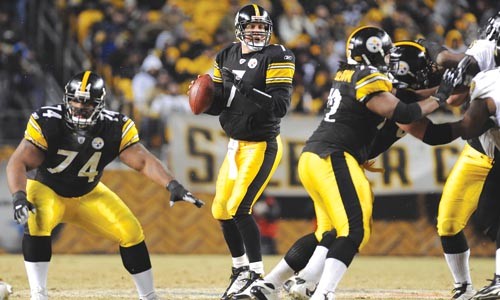 A few days before the 1975 Super Bowl, recounts Roy Blount Jr. in his classic book About Three Bricks Shy of a Load ... And the Load Filled Up, Steelers linebacker Andy Russell was reading Joe Greene a newspaper article about a college professor who studied the Super Bowl.

"'More than a game,'" continued Russell, "'it is a spectacle of mythical proportions which becomes a "ritualized mass activity," says Michael R. Real, assistant professor of communications at the University of California at ...'

"'Shit,' Green cried. He seized the paper and tore it to shreds. 'I'd like to run into that guy,' he said of Michael R. Real."

Back then, the Super Bowl was somewhat less supersized than today: Tickets were $20 (not $800 to $1,000, face value) and 30-second TV ads cost about one-seventh of this year's record $3 million, even when adjusted for inflation.

But with apologies to Mean Joe, the Super Bowl is more mythic than ever -- if only because in a multimedia-saturated, niche-marketed world, it might be the last big thing left.

"It's the largest undeclared secular national holiday since [Lincoln] declared Thanksgiving," says Stuart Estrock, an assistant professor of communications at the University of Louisville.

Like many academics on the Super Bowl beat, Estrock tracks ads -- which were once just, you know, commercials. But thanks partly to landmark spots like (ironically enough) Greene's own jersey-tossing 1979 Coke pitch and Apple's dystopian "1984" Macintosh launch, ads are now a big enough sideshow to constitute a main event of their own.

Indeed, such peripherals are what drive the event's continued growth. John Clark, an associate professor of sports management at Robert Morris University, says that a study he conducted in Detroit found the Super Bowl attracting equal numbers of casual fans and die-hards, the former drawn at least as much by "the coin flip, the halftime show, who was singing, the commercials."

Where once high school marching bands took the field at half-time, this year it will be Bruce Springsteen prowling the field. (The first big-name celeb to dominate a half-time show? Carol Channing in 1970's Super Bowl IV.) Coin flips in particular, Clark notes, have metastasized into huge productions.

Officially, about 97.5 million Americans -- nearly one-third of the country -- watched last year's game, a record. So though the rise of cable and satellite TV has shrunk the game's share of the viewing audience -- it seems to have peaked in the '80s and now hovers around 40 percent -- it remains the biggest TV show around.

The Super Bowl's many uses are discussed annually at the University of South Carolina's Ad Bowl and Ad Bowl Symposium. In the Ad Bowl, students and faculty rate the ads. (The public can vote online at www.jour.sc.edu/adbowl/.) Symposium lectures sport titles seemingly designed to incite Mean Joe's wrath, including "The Super Bowl as a Super Source of Propaganda."

For example, the global-harmony themes that marked Super Bowl ads after the Berlin Wall gave way, after the first Gulf War, to stars and stripes, notes Bonnie Drewniany, the USC advertising professor behind the Ad Bowl and symposium. And surely it says something that even as the ads have grown more racially inclusive, their humor has gotten both racier and crueler. "The earlier commercials are quite sweet and endearing," says Drewniany.

This year, she wonders how the worst economy in Super Bowl history will play out in the ads: "It's going to be interesting to see if they pull back a little."