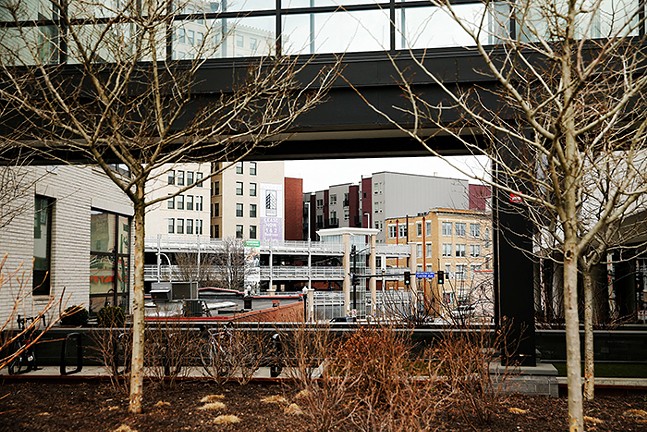 On Wed., May 4, Pittsburgh City Council held a special public hearing on the crisis of Black Pittsburghers leaving the city. The public was invited to sign up to register for public comments during the meeting after a petition from city residences requested the hearing before council.

With much conversation about issues facing Black Pittsburgh in an election year, the meeting was filled with impassioned speakers who had their ideas on what has caused this “exodus.” One of the big stats repeated over the afternoon was that from 2014 to 2018, over 7,000 Black people, 9% of the remaining population, left the city. Over 20 people were given a chance to speak during the meeting, though many of the people were not present or experiencing technical difficulties.

Pittsburgh City Paper is highlighting 10 quotes from the hearing:

“The city of Pittsburgh has mistreated Black people for more than the 50 years I've observed life here. One can mark the 1950s Negro Removal push out, conducted to usher in the first Renaissance, which warehoused Black people in locations so isolated and scattered that it destroyed the geographic, social, economic, and political heart of the African-American community.”

“Moving from Beaver County to Pittsburgh, I thought I was moving into an area of more opportunity. Well, what I, what I moved into was systemic racism. What I moved into was one blighted area after the other, because of affordability because of the systemic systems that caused me to have to work a hundred times as hard as anyone to just get out of one place and into another.”

“As a recent graduate, I want to bring attention to the role that universities and medical institutions play in using their nonprofit status, such as the University of Pittsburgh and UPMC. Several of their 30 year plans and comprehensive plans show increased encroachment into neighborhoods such as South Oakland, the upper Hill, and even Hazelwood through the Mon-Oakland connector plan. Growth for universities and hospitals like UPMC comes at the cost of residents, especially in predominantly Black neighborhoods.”

“Politicians have promised the city would be economically and racially diverse, but one mayor after another, one city council after another, has accelerated existing class- and race-based inequities. Since the 1980s, there was a policy and practice of forced displacement of Black families out of the city. There have been two main drivers for this displacement. One of the drivers is gentrification. By gentrification, I mean the Pittsburgh neighborhoods that were redlined during and after World War II are now being flipped for profit by the banks and the developers. The lower Hill and now Homewood are the biggest examples, but it is happening in all your council districts. The other driver has been destruction of public housing without replacement. The practice of the housing authorities supported by the city and the URA has been to offer vouchers to public housing residents and promise them that they can return after the projects are torn down and rebuilt, but the return never happens for the vast majority of families. ”

“I'd like to say a few words about the often repeated claim that disinvestment displaces more Black residents than gentrification. We've all heard it, and I'd like to talk about the implications that arise from that claim. In 2018, a research firm called Numeritics published a report that found that an average of 130 Black residents per year were displaced from East Liberty as a result of poor housing conditions from 2007 to 2011, followed by an average of 73 Black residents per year in the following four years due to the gentrification. What Numeritics didn't mention in their report is that the period that they chose to study lies between East Liberty’s two largest mass displacement events: the Federal American properties redevelopment, which displaced an estimated 172 Black residents per year, over three and a half years through evictions, attrition, and relocation; and Penn Plaza, which displaced an estimated 295 Black residents over a 20 months, 21 months period.”

“I'm a local city boy. I’ve witnessed my mom on her knees before, begging a landlord not to evict us from our property because she didn't have anywhere for a baby to stay far too many times. And I went to work to not have to see that again because it is a heartbreaking sight, and it's not something that a kid who is only about 14 should have to worry about. … I’ve been on the receiving end of landlord tyranny before, and I suspect I’ll be on it many times again throughout my life, I’m only 23 years old”

“Kai Jackson, who you just heard speak, is my 22-year-old son. We have been street homeless. We have been pushed out. We have been displaced to Homestead and, you know, even during a pandemic, we faced many struggles. And so as I just wanted to say that we were in favor of the monies that come from COVID be given to the community to rebuild, specifically the Hill, Hazelwood, and Homewood. Those communities need to be rebuilt. ... We have a right to this city.”

“I know the mayor's been defending his record on this by saying that Black people are leaving the city because of bad schools. That's just another excuse in an endless line of passing the buck. This isn't his hearing, but almost all are on team Peduto. And some of you have been repeating the same talking points. So I'll say it to you all, too. If you think that our city's Black residents are leaving the city because of bad schools and not rising rents, not poor health outcomes, not systemic racism, you're lying to yourself. You're lying to all of us. This reminds me of the clean air battle. We have study after study, making it clear that the air we're breathing is killing us. We know where that bad air is coming from, your local polluters, and the elected leaders they donate to tell us we're making things up. We're seeing the same exact thing here. You're replacing dirty polluters and the county leaders with developers and city leaders. Stop lying to our faces. We know from generations of redlining, highway construction, and government efforts to maintain segregation and other forms of largely intentional structural racism that low income people are disproportionately Black. When Pittsburgh becomes unaffordable for low-income people, Black people leave the city.”

“The same kind of displacement happened in East Liberty gardens and in Penn Plaza. Why should redevelopment, revitalization of a community involve people that lived there through the bad times, having to move? There should be a way that the people who lived through the bad times should benefit from the good times. And the best way is to just sit down and listen to us. We have proved ourselves over and again that poor people aren't stupid. We know what's what we need.”

“I facilitated a program at Schuman Juvenile Detention Center and encountered young boys who were only there because they were now homeless due to gentrification. In Homewood, two-bedroom town homes are being rented for a minimum of $1,000 per month. And basic houses are being sold for over $200,000. This is well beyond affordability for the existing community, which has and will continue to effectively remove the current residents. They will be replaced by universities, big corporations, tech, research, and other forms of gentrifiers. Our communities are being taken, renamed, and our people erased and left to fend for themselves with little-to-no resources, access or support.”

One of the other big talking points from the afternoon was the $355 million Pittsburgh is set to receive in COVID relief funding from the American Rescue Plan. Activists suggested that $200 million of that be allocated into building affordable housing for East Liberty, Homewood, and Lincoln-Larimer area residents who have been displaced. There is no formal plan to do this as of now, but as displacement of Black residents is a big topic in the coming election, Pittsburghers, especially those who are Black, are wanting answers and solutions.