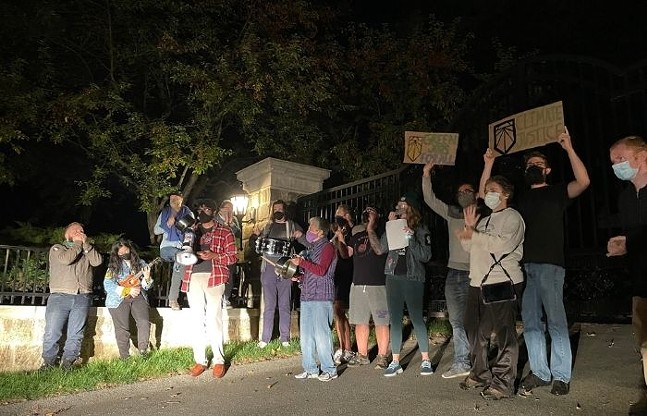 Members of the organizations delivered speeches about Manchin’s refusal to support President Joe Biden's $3.5 trillion Build Back Better Act, which has put the reconciliation bill in limbo. Manchin has signaled some openness to a lower price tag for the bill, but it's unclear how much overall support that has. The activists outside of Bresch's home requested that she help lobby her father to support the full $3.5 trillion reconciliation bill, which would include funding for free community college, expanded Medicare, childcare, universal Pre-K schooling, lowering prescription drug prices, fighting climate change, and more.

“Manchin is not a fiscal moderate. He is bought and sold by industries that are fighting against human survival for their own profit,” says Sunrise Movement Pittsburgh coordinator Elise Silvestri, according to a video posted by the group.

Bresch is the former CEO of Mylan, the drug company accused of causing the nearly 400% rise in the cost of EpiPens between 2007 and 2016. While she was CEO, Mylan was a top donor to Manchin's political campaigns.


Rise and shine, Heather Bresch!
Since @Sen_JoeManchin is ignoring millions of Americans who want the full #BuildBackBetterAct, we went to someone he might listen to: his millionaire lobbyist daughter. @pghDSA @Petro_Is_OVER pic.twitter.com/6n3FSpCvYm

The activists “job offer” cites this context as the reason the organizations believe Bresch would be suited to convince Manchin to stop pushing cuts to the bill. The bill has support from across the political spectrum, with 66% of Americans supporting the bill. according to recent polling. In West Virginia, that number is higher, with 68% support.

But, as the “job offer” states, “Manchin does not listen to his constituents.” Manchin recently declined to give specific answers to constituents who kayaked up to his houseboat near Washington, D.C. to demand that he support the infrastructure bill. Currently, he and U.S. Sen. Kyrsten Sinema (D-Ariz.) are the two Democratic senators resisting the bill’s costs.

Manchin has proposed cutting the bill down to $1.5 trillion, and he has insisted that he has “no timeline” and that he wants to understand the bill before definitively supporting or opposing it.

“We know moral appeals won’t work on Manchin because I don’t think we have hope that he cares that much,” Silvestri says. “But maybe his daughter telling him, ‘Hey Dad, you are really messing up right now,’ maybe will do something.”