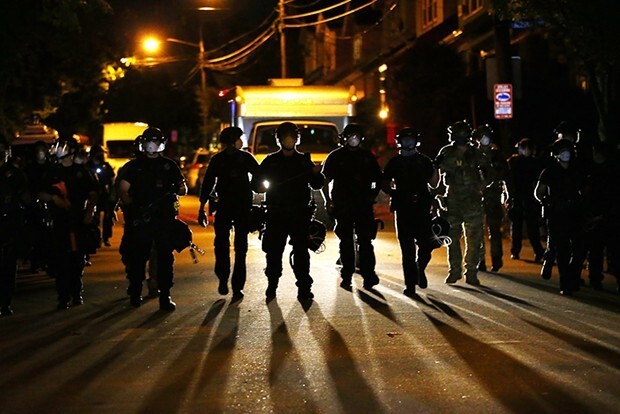 CP photo: Jared Wickerham
Pittsburgh Police in riot gear in August
Pittsburgh Mayor Bill Peduto and his administration have received criticism from some advocates for what they say is prioritizing police funding over the needs of under-served communities, especially during a pandemic that has left many residents struggling.

Activists believe there is too high an allocation towards the police department in the City of Pittsburgh's $564 million operating budget and $124.9 million capital plans for 2021. This allocation has come under more scrutiny particularly this budget season after a year defined by protests – including some right outside the mayor's Point Breeze residence – calling on Pittsburgh and other cities to reallocate funds away from the police as a way to address widespread misconduct by law enforcement, particularly the brutality against Black citizens.

A budget analysis by the Pittsburgh Budget and Policy Center, an initiative of the Keystone Research Center focused on making government spending more equitable, reports that Peduto’s proposed 2021 budget for the Police Bureau accounts for 20% of the city’s entire operating budget. In other words, $1 out of every $5 of the City’s operating budget goes to fund the City’s police bureau.

“Despite a summer of protests and several local incidences of police violence, under Mayor Peduto’s proposal the Bureau of Police’s share of the operating budget would rise to its highest level in the last six years,” says PBPC.

Peduto is proposing a 2.9% cut to the Police Bureau budget, a decrease found to be lower than what has been proposed in all but four of 27 other city departments. The city's Bureau of Fire, Emergency Medical Services, Office of Equity, and the Office of City Planning, which oversees issues like affordable housing and ADA compliance, would all also see cuts. Thanks to the pandemic and a lack of federal funding, the city of Pittsburgh has a large budget shortfall this year, meaning cuts were forced across multiple departments.

PBPC points out that, even with “growing public outcry about documented examples of police violence against Blacks alongside a pandemic and the resulting need to re-examine local budgets amidst shrinking revenues,” Mayor Peduto has proposed “no decrease in the number of uniformed police officers in Pittsburgh.”

“Pittsburgh’s budget is the moral document of the city; it is a direct reflection of our priorities,” says Fisher in a press release. “But too often, we choose instead to spend millions to militarize law enforcement and deny our communities the resources they actually need. Our priorities need to change if Pittsburgh is going to address our city’s racial and economic disparities. We need more money for families in the middle of a public health and economic crisis; not more money for police.”

Fisher adds that APA would like to see the police budget cut by 50%, with funds being diverted into areas more essential to improving the quality of life for residents as the pandemic leads to higher unemployment rates and more housing insecurity.

“At the intersection of multiple crises, we have the opportunity to craft a city budget that ensures Pittsburghers can all care for our families, set our kids up to thrive, and have full and healthy futures,” says Fisher. “This budget fails to do that.”

Pittsburgh City Councilor Ricky Burgess (D-Point Breeze) says the constituents in the predominantly Black neighborhoods he represents value the city's policing, according to the Pittsburgh Post-Gazette.

Peduto's spokesperson Tim McNulty told the P-G that the mayor “does not support defunding the police but rather reimagining policing," and noted that “cutting police spending means laying off police officers.”

However, the Pittsburgh branch of the Democratic Socialists of America says increases in police funding over the years has led to an uptick in arrests of Black Pittsburghers. Black people in Pittsburgh and Allegheny County are disproportionately incarcerated, arrested, and confronted by the police.

According to a recent report from the Abolitionist Law Center, even though Pittsburgh's Black population is around 23%, Black residents in the city in 2019 experienced 69% of all search and seizures made without a warrant and 63% of all arrests by the Pittsburgh Bureau of Police.


Mayor Peduto has told us for years how he's reforming the police. Ex: https://t.co/IxNm0JlMR6

But the facts are clear: Giving police more resources for reform only gave them more resources to get more racist and inflict more violence on Black people. pic.twitter.com/kvLWMBIS05

The PBPC report states that Peduto did propose allocating an amount equal to 5% of the police budget to a new Office of Community Health and Safety. The entity, which was announced in June, was created to better address community needs by deploying housing social services, public health, and social work experts to “assist first responders in situations that require longer-term assistance, harm reduction support and other services,” according to a press release.

Operated under the co-direction of the Department of Public Safety and Office of the Mayor, the office is basically meant to keep police officers away from crisis situations they lack the ability to handle and could potentially escalate.

“Our public safety personnel are available 24/7 but often go into situations that are beyond the scope of their training,” Peduto said in June. “The individuals and communities they encounter need help beyond law enforcement or emergency medical attention. This office will allow public safety to step back and determine what kind of support an individual or family needs and get them that help through social workers or other agencies so that we're seeing people holistically and connecting them with more sustainable resources and assistance.”

However, the PBPC analysis expands on Fisher's claims by pointing out that funding for affordable housing projects accounts for only 5% of the total proposed Capital Budget for 2021. It goes on to explain that if Police Bureau funding returned to its 2016 level – then 18% of the Operating Budget – the city could redirect “nearly $10 million to affordable housing and double the funding available in the Pittsburgh Affordable Housing Trust Fund.”

“With an eviction crisis looming and an economic crisis already underway, we should be doubling the investment to the Housing Opportunity Fund and prioritizing immediate assistance such as rental assistance and rapid re-housing,” reads the report.

Juan Garrett, executive director of the Riverside Center for Innovation, a North Side-based nonprofit dedicated to empowering disadvantaged small business owners, believes the 2021 budget proposal is a missed opportunity to improve the city and help it weather the COVID-19 pandemic.

“Given the racial and economic gaps that persisted here even before the pandemic, this year’s budget must ensure that we invest in improving the lives of all residents, but especially marginalized communities by ensuring that we can all make ends meet, tackle this pandemic, and care for our families," says Garrett. "This is the moment to make real, long-term changes that address our city’s glaring racial and economic inequalities.”