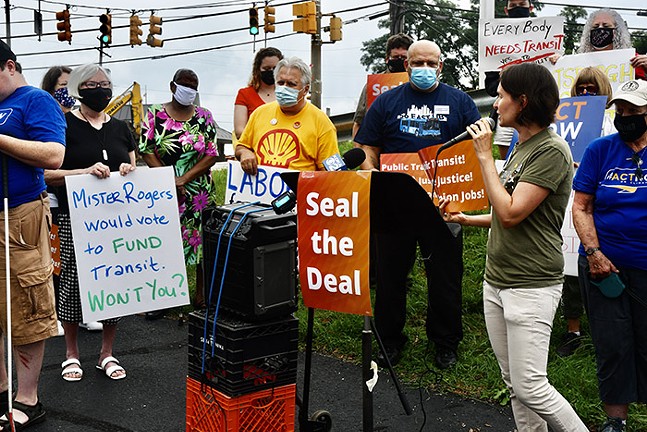 Organizers of the #SealTheDeal rally stood alongside supporters holding signs that read, “Public Transit! Climate Justice! Green Union Jobs!” The message was to urge members of Congress like Lamb to pass an economic plan that emphasizes and invests in climate justice, green jobs, and public transit.

Supporters at the rally, including Penn Hills resident and Pittsburgh Transportation Group Operator Sascha Craig, called for Lamb to fully restore the $10 billion cut from public transportation in the bipartisanship infrastructure bill.

“Transit is a need. It is a right of the people, and that is what we need to understand,” Craig said at the rally. “Stand up for your people, Mr. Lamb … because if you don’t, Mr. Lamb, you'll go by the wayside of other politicians who have promised but could not deliver.”

The rally called for Lamb to support green, family-sustaining jobs, and address public health needs in local communities by ending the subsidy on fossil fuels and prioritizing investment in electrification infrastructure.

Verona, Pa. resident and Sierra Club volunteer Laura Jacko discussed how she hopes to see legislation invest in 100% clean infrastructure to reduce air pollution as her family faces respiratory issues, like her child’s reactive lungs and her husband’s asthma.

“For the health and safety of our region and our children, I strongly ask Rep. Lamb to back this legislation and to fight to pass it as quickly as possible,” Jacko said at the rally. “It is long past time for us to end the subsidies to industries that pollute our air and water, and invest in green industries that will offer good jobs, a clean environment, and a livable future," she added in a press release.

Lamb recently announced his entry into the 2022 Pennsylvania Senate race in early August as Republican Senator Pat Toomey will retire.

Lamb has not made a statement about whether or not he supports the reconciliation bill. A request for comment sent to Lamb’s office was not answered by press time.