“When you have a system that only involves the police investigating police, then you are going to have trust issues.” 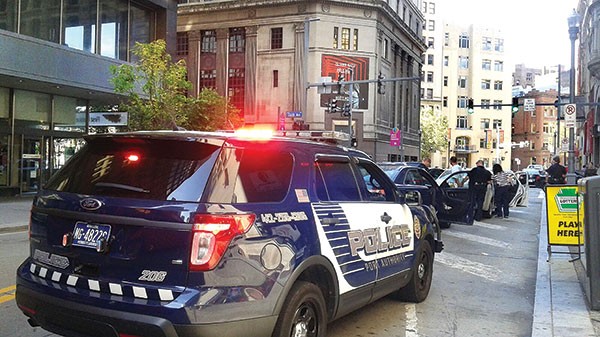 This past January, Bruce Kelley Jr. was fatally shot by Allegheny County Port Authority Police. He was approached by officers for allegedly drinking in public and was ultimately shot after stabbing a Port Authority police dog.

This was the most high-profile case involving Port Authority police in recent memory. The Allegheny County District Attorney’s office stepped in to help investigate, as is protocol in officer-involved shootings like these, according to DA spokesperson Mike Manko.

A month before the shooting of Kelley, Port Authority officers arrested five teenagers after a ruckus broke out at the Wood Street T station Downtown. At least four of the five boys’ cases never went to trial. As former refugees from East Africa, and of Somali Bantu ancestry, the boys’ family told City Paper in December 2015 they were discriminated against due to their ethnicity.

In response to the family’s claims, Port Authority said: “We have reviewed the incident at length with our police chief and have found nothing about our officers’ handling of the situation to be problematic or contrary to their training.” Unlike the lengthy Kelley investigation, this review took only a few days.

These two high-profile cases involving the Port Authority Police had drastically different investigation processes and have sounded the alarm of local police-accountability advocates. There is currently no external, internal or governmental agency dedicated to investigating Port Authority police incidents, and transparency at the authority’s police force is limited.

“With the state of the lack of trust and tension between the police and community, transparency is a must,” says Brandi Fisher of the Alliance for Police Accountability. “When you  have a system that only involves the police investigating police, then you are going to have trust issues.”

Fisher says she is dissatisfied with the unit’s accountability measures, particularly the lack of an independent review. She says that when complaints are issued, they are sent directly to the chief. He and two of his highest-ranking lieutenants review them and decide how to move forward. Fisher says this constitutes the old standard of “police agencies investigating themselves.”

“It’s [Porter’s] process, so who knows how he handles that,” says Fisher. “He indicated to me that he is the accountability process. … Because of what happened in the Bruce Kelley case, we believe he is not a person who we can rely on for integrity and accountability. The chief should not be the sole accountability officer.”

Port Authority Police officially started in 1982, under Pennsylvania’s Railroad and Street Railway Police Act, with just over a dozen officers. They were given full arrest powers and can act the same as any other police department in the state. Today, the unit has between 40 and 45 officers and should be adding several more when the police start patrolling light-rail T cars in 2017.

While Port Authority police mostly patrol their highest-activity areas, like subway stations and along the county’s busways, the unit has authority to make arrests related to Port Authority’s entire system. So its jurisdiction can take officers all around and even beyond the county, as some bus routes enter Beaver and Westmoreland counties. The authority’s police force is around the same size as Penn Hills’ and Mount Lebanon’s police departments; in the region, only Pittsburgh and Allegheny County police units are larger.

According to Port Authority police arrest records obtained by CP, the force made 3,865 arrests from 2013 to 2015. That averages to about 32 arrests per officer, per year, over that span. The Pittsburgh Police, at around 900 officers, averaged about 21 arrests per officer, per year over the same span; Mount Lebanon officers averaged 13 arrests per year over a three-year span from 2011-2013 (the last year data was made public).

Despite these comparatively high arrest averages and the force’s large jurisdiction, little information is publicly available about the more than 30-year-old Port Authority police unit. The authority’s main website shows no police annual reports, nor has the authority ever conducted an audit of its police unit. Additionally, a separate Port Authority police website is riddled with dead links and offers a link to a message from the Port Authority chief which says that the message “is on its way, stay safe and stop back,” next to a photo of a man who is not the current chief. Pittsburgh’s own nationally recognized policing expert, University of Pittsburgh professor David Harris, even told CP that he too is unfamiliar with the unit. “I really don’t know anything about the [Port Authority] police,” he wrote to CP in January.

Fisher, too, has struggled to understand the mysteries surrounding Port Authority police. She says the department has no transparency or community engagement, and she is still unsure who holds the unit accountable. “If there is an accountability system above him,” she says of Chief Porter, “he did not make it clear [to me] what it is or what it can do.”

“When the need for an internal investigation arises, Port Authority has a process in place for its command staff to function as its internal investigation unit. If a complaint is deemed credible, the police department command staff also have Port Authority’s human-resources department, legal department and senior management officers to assist them and provide advice and guidance,” he wrote.

Fisher says there are many problems associated with only the chief and high-ranking officers deciding which cases are worthy of review, because concerned citizens and advocates are solely dependent on them to make the right call.

Beth Pittinger, of Pittsburgh’s Citizen Police Review Board, says multiple high-profile police cases in the 1980s and ’90s caused the community to demand some accountability from the Pittsburgh police, which led to the creation of an independent review board. She says this board is due for an expansion.