“It sets the tone for discrimination against people.” 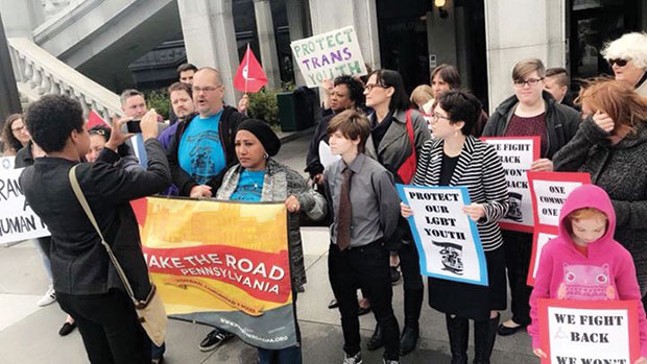 Photo courtesy of Adanjesus Marin
Group of activists gathered in Harrisburg on Oct. 30

For the past few weeks, Naiymah Sanchez has been traveling around Pennsylvania to raise awareness about an amendment, which is attached to a bill reauthorizing the state program that provides health insurance to children. As the transgender-education-and-advocacy coordinator for the American Civil Liberties Union of Pennsylvania, it’s her job to bring attention to this issue, but as a trans person, it’s also personal.

“The most important thing we can do is uplift the stories of those individuals that are going to be affected by this amendment,” Sanchez says.

The amendment has been attached to the reauthorization of the Children’s Health Insurance Program. CHIP provides health-care insurance to 176,000 Pennsylvania children. The program is open to families who earn too much to qualify for Medicaid, but can’t afford to purchase coverage on their own.

This year, the Republican-controlled Pennsylvania Senate attached an amendment to the CHIP reauthorization that would prohibit funds from being used for transition-related surgical services. Last week, on Oct. 25, the amendment was approved by the Senate by a vote of 37-13 and has now been sent on to the House.

“It sets the tone for discrimination against people,” says Sanchez. “The most marginalized and vulnerable individuals are children, and to make any amendment to any health-care coverage that targets specific communities is discriminatory.

“The CHIP program is for children of low-income families. This is a tactic they’re using to attack the community.”

The vote was criticized by Gov. Tom Wolf and state Sen. Jay Costa (D-Forest Hills), who voted against the amendment and called it discriminatory. Local state senators who approved the amendment include Sen. Guy Reschenthaler (R-Jefferson Hills) and Sen. Randy Vulakovich (R-Shaler).

“Voting for the reauthorization of CHIP should be the easiest vote we take in this chamber. This program is so popular and so effective that we should not even need to go through this process every few years,” Costa said in an Oct. 25 statement. “But here we are, and an amendment that cruelly and blatantly discriminates against transgender children and young adults has politicized health insurance for every Pennsylvania child.”

Activists say the amendment is yet another attack on the transgender community and part of a nationwide trend. According to Human Rights Campaign, an LGBTQ advocacy organization, this year more than 130 anti-LGBTQ bills were introduced across 30 states.

The CHIP amendment was proposed by Sen. Don White (R-Indiana). Prior to last week’s vote, White posted a statement on Oct. 18 extolling the virtues of the CHIP program, but describing why he believed the amendment was necessary.

“It is completely inappropriate to use state funds to pay for sex-change operations for children. I believe that is a position that is strongly endorsed by a vast majority of Pennsylvanians,” White said. “I strongly support CHIP. This program provides vital health-care services for Pennsylvania’s children. It is irresponsible to allow its limited resources to be used for sex-change procedures.”

White said his amendment “is in line with current state regulations that prohibit the use of Medicaid funding for sex-change procedures.” But states like New Hampshire have chosen to lift the ban on using Medicaid for sex-confirmation procedures.

It’s the kind of thing Sanchez would like to see implemented nationwide. Sanchez says children shouldn’t be discriminated against for wanting to embrace who they are.

“This isn’t a choice,” Sanchez says. “I don’t think anyone would choose to be hated and discriminated against.”

On Oct. 30, members of a statewide coalition called #paresist rallied in Harrisburg to denounce the amendment. The group included members from activism organizations such as Equality Pennsylvania, Power Northeast, SEIU Healthcare Pennsylvania, the LGBT Center of Central PA, TransCentral PA, PHAN and Make the Road Pennsylvania.

“Republicans are holding hostage the 176,000 Pennsylvanian children who rely on CHIP in order to codify hate in our laws,” Adanjesus Marin, director of Make the Road Pennsylvania, said in a statement. “We will not accept any attacks on our most vulnerable, especially young kids.”

Activists say the amendment is in line with nationwide attacks on health care, most evident in attempts to repeal and replace the Affordable Care Act, and the rights of citizens to make decisions about their health and bodies.

“The discriminatory amendment is an attack on health care in general and part of a broader attack on transgender people,” Matthew Yarnell, president of SEIU Healthcare Pennsylvania, said in a statement. “Health-care decisions should be made by doctors, parents and youth, not Harrisburg politicians.”