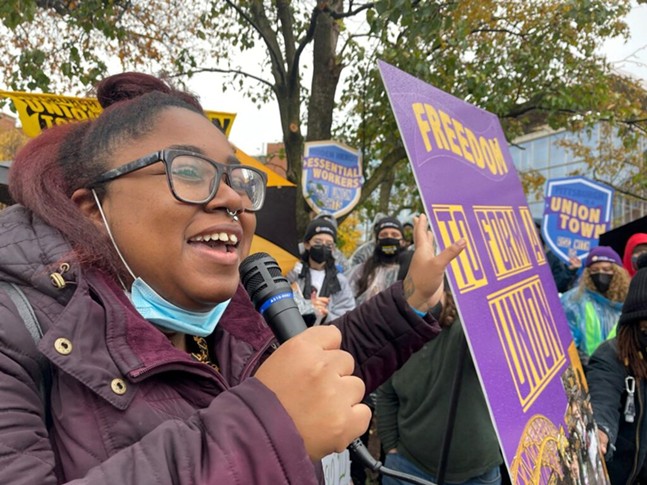 Zarah Livingston, 27, of Penn Hills, told the Capital-Star on Monday that she plans to challenge state Rep. Anthony DeLuca (D-Penn Hills) for a seat in Pittsburgh’s eastern suburbs.

Livingston is a UPMC health care worker who also helps run No Cop Money Pennsylvania, a group that demands elected officials “refuse money from police unions and, instead, to donate to organizations that uplift Black communities.”

DeLuca, 84, was first elected in 1982, and Livingston said it was time for someone new given that “it’s been the same person for longer than I’ve been alive.”

Among her priorities, Livingston said, is fighting mass incarceration by decriminalizing marijuana and magic mushrooms, also known as psilocybin.

“Why would you want to essentially delete something that helps people help each other, help your neighbor?” Livingston asked, pointing to the high cost of legal bills.

Livingston also said she wants a representative with closer ties to the community, wants to address gun violence by creating new after school programs for young people, and make it easier for citizens to access public information such as campaign finance records.

Her campaign website further lists environmental justice — such as a ban on fracking —  demilitarizing the police, and addressing homelessness as top priorities.

The run is eschewing labels, Livingston added, because “people grow and change all the time. So like, why would you not be allowed to do that politically?”

“It makes perfect sense to me,” she said.

Speaking to the Capital-Star Monday, DeLuca said that he planned to run for re-election for a 21st term, saying he still has “initiative and the spunk to get out there,” and that he still sponsors “good legislation that will benefit this society of ours.”

The long-time ranking Democrat on the House Insurance Committee, DeLuca has been an advocate for putting Affordable Care Act provisions into state law.

But there are some recent counterexamples. He voted against a bill last week to allow for permitless concealed carry, saying it could harm law enforcement; he joked on the House floor that vote might draw him an election challenge.

Rep. Tony DeLuca, D-Allegheny, a normally pro-gun Democrat, says he can't support the bill, even if it might "get him an opponent next time."

DeLuca argues his stances match his district, and that the Democratic Party is big enough to hold himself and those who may disagree.

“I think it’s important that all Democrats are not labeled as anti-police or socialists, we’re a big tent,” he said. “We have pro-gun, we have pro-life, we have anybody.”

“In my district they want police protection,” DeLuca added. “I certainly support the police.”

As for Livingston’s priorities, DeLuca said he would vote to decriminalize marijuana, but not fully legalize it.

DeLuca questioned how bail funds were run, and argued that the groups nullified judicial decisions by bailing out the poor.

“That should be up to the judges, not the individuals,” DeLuca said.

Livingston joins the growing ranks of political newcomers announcing runs against lawmakers new and old across the state.

In Lancaster, Democratic Rep. Mike Sturla, elected in 1990, is facing at least one challenger for the 96th House District seat, And a wave of progressive challengers have begun to announce in Philadelphia.

The exact battle lines for all these contests, however, are still undecided. The state legislative redistricting commission has yet to release new maps.

As it’s currently drawn, the 32nd House District seat DeLuca now holds is a racial and economically diverse district, including parts of Penn Hills, as well as Plum, Verona and Blawnox.

DeLuca has faced a primary opponent his last two elections, winning both with about two-thirds of the vote. He’s rarely been challenged in the general election, winning his last contested November race was in 2012.

As a Black queer women, Livingston added that even if he run isn’t successful, she hoped she could motivate someone else like her to run for office in the future.

“There’s like a lot of opportunity for that to snowball into something,” Livingston said. “I don’t know what it would be. But hopefully something good."

Stephen Caruso is a reporter at the Pennsylvania Capital-Star, where this story first appeared.