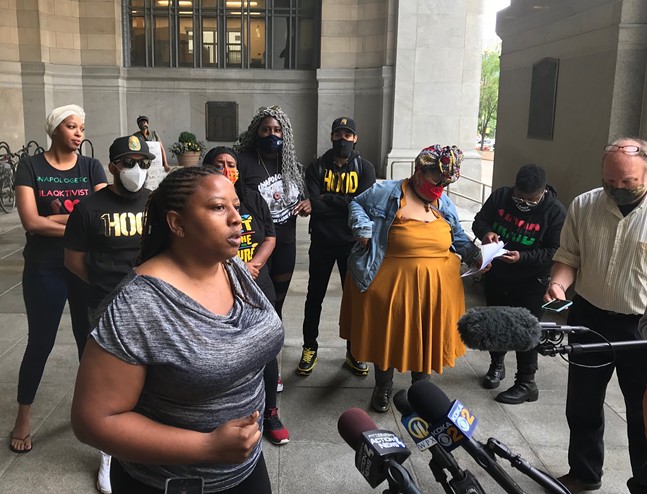 CP photo: Ryan Deto
Brandi Fisher of the Alliance of Police Accountability speaks at a press conference
Today, a coalition of advocacy groups from across the Pittsburgh region issued a list of demands of legislation and action relating to police reform in the city and Allegheny County.

Many of the groups present at today’s press conference have been heavily involved in organizing protests related to the deaths of George Floyd and Breonna Taylor, Black people who were recently killed by police.

The coalition listed 12 demands and highlighted some of them during the press conference, including calling for Fraternal Order of the Police Lodge #1 president Robert Swartzwelder to step down, reallocating budget funds from police to community investment, and demilitarizing local police agencies.

They were delivering these demands to Pittsburgh Mayor Bill Peduto and Allegheny County Executive Rich Fitzgerald. Miracle Jones of 1Hood Media, one of the groups present, says delivering the list of demands was a way to show city and county leaders how urgent and necessary these issues are.

“When it comes to holding police officers accountable, we have seen a lack of response and urgency from local, state, and national officials,” said Jones.

On June 8, Pittsburgh City Council began to discuss legislation that, if passed, would prohibit the city from acquiring military equipment and weaponry, move $250,000 from police salaries to a gun violence prevention fund, and require a budget obligation to that fund.

At the meeting, Swartzwelder expressed his opposition to any reallocation away from the city’s police budget.

Jasiri X, founder of 1Hood, said the call of Swartzwelder’s resignation is not new. 1Hood started a petition calling for his resignation after the Allegheny County District Attorney revealed the Swartzwelder interfered in two investigations of events where police shot Black people in Pittsburgh. Jasiri X says that Swartzwelder has never apologized for this interference.

“How can we have real improvement in community-police relations when he has not apologized for that obstruction?” said Jasiri X.

The coalition is adopting the language of “Defund the Police” when calling for a reallocation of monies normally set aside for police budget. They propose investing that money in Black communities, as well as de-escalation, mental health, and trauma-response training for community groups and organizers.

Brandi Fisher of the Alliance for Police Accountability says reallocating funds from the police budget shouldn’t be controversial and that the city reallocates funds every year. She decries any spending on military-style equipment for police and says the city budget allocation of $110 million for police should be reduced. Fisher also says that training efforts for officers have not been effective and that changes to the police budget are necessary.

“Instead of increasing the police budget, we should help people graduate and get jobs,” said Fisher.

Peduto said on June 8 that he has a “hard time believing that we'd be a safer society without police officers.” But also, when Peduto was being criticized over a supposed “crime wave” in Downtown last year, the mayor was critical of calls to add police, telling the Pittsburgh Post-Gazette he wasn’t interested in using Pittsburgh police to round up the homeless, people with substance abuse disorder, and those with mental health issues.

Peduto also pledges to adopt all of the 8 Can’t Wait police reform pledges. But the coalition believes those do not go far enough. Jasiri X points out that Minneapolis Police had adopted seven of the eight reforms before George Floyd’s killing, and that New York City had banned police use of chokeholds, but that Eric Garner was still killed by a chokehold from an NYPD officer.

But the city wasn’t the only target of the group’s advocacy. Fawn Walker Montgomery of Take Action Mon Valley said that many police misconduct incidents occur outside of the city boundaries, and mentioned that Antwon Rose II was shot and killed by police in East Pittsburgh borough, in the Mon Valley.

She said the demands are county-wide, and not just for the city. She acknowledged that there are many police departments throughout Allegheny County that need reform, and that even county action can’t address those immediately. However, she said the county should be setting an example for smaller municipal police departments to follow.

“They set best practices and maybe other municipalities will get on board,” said Walker Montgomery, referring to the Allegheny County government.

One proposal currently being considered is a county-wide police review board. Allegheny County Councilor Liv Bennett (D-North Side) is championing the bill, but says they are still working on convincing councilors to adopt such measures. She said at the press conference that it has been a “challenge to get folks to support it,” which includes Democrats and Republicans on council. 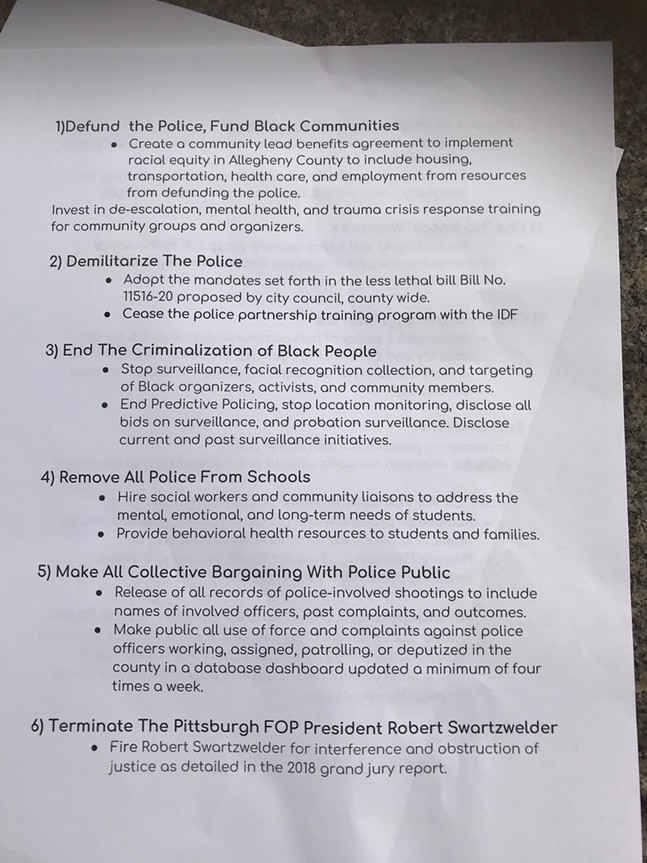