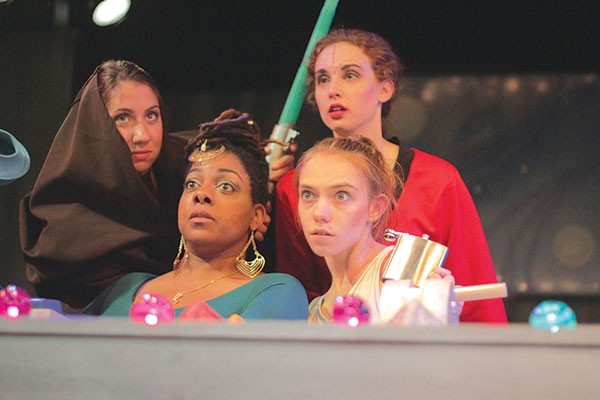 The cast of "Nightingale" at the Pittsbugh Pride Theater Festival.

Acting Out is the sixth annual edition of the Pittsburgh Pride Theater Festival. And this brisk, 90-minute anthology of four new LGBTQ-themed one-acts by local playwrights — two comedies, two dramas — is a well-crafted evening's entertainment.

"Mercy" is Staci Backaukas' tough-minded drama about a woman visiting her ex-lover in prison and getting more than she bargained for. Jezebele Zbonzy-DelPercio, as the self-described "ghetto rat," and Brittany Dorazio, as her more-privileged ex, pull off this engrossing two-hander with help from sensitive direction by Ja'Sonta Roberts-Deen.

Two more ex-lovers square off in Keith Foster's "(Un)packing," also directed by Hoover. It's a heady piece, set in a book-filled room, that uses one former partner's obsession with U.S. foreign policy — specifically, Obama's approach to Syria — to launch a metaphor about their own failed relationship. Ryan Westwood and Connor Bert handle the tricky dialogue with skill.

The program closes with the proud camp of "Nightingale." Carol Mullen's spoof, which combines elements of Star Trek and Star Wars, is set aboard a female-crewed space cruiser where an old lover is as likely to turn up as is over-the-top dialogue, a Casablanca reference and every sight gag director Kim El can cram into the play's fast-paced 15 minutes. Corrine Paulson plays Capt. Kate Cox with appropriate swagger (and a hip flask tucked in her garter).

Produced on a shoestring, with lots of help from Pittsburgh Playwrights Theatre Co., the Pride Theater Festival continues to be an important showcase and proving ground for local playwrights and actors, and for nurturing young talent. (Playwrights Nemec and Foster, for instance, are recent college graduates.) But it's also an entertaining program in its own right.