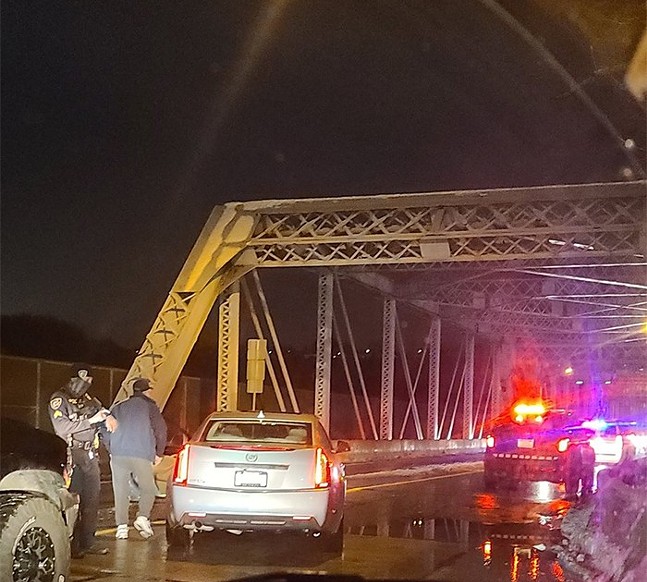 Photo: Courtesy of Tanisha Long
Vehicle checkpoint on McKeesport-Duquesne Bridge on Sun., Dec. 20, 2020
After a series of checkpoints and alleged warrantless searches inundated McKeesport this winter, a group of residents and advocates wanted to take their concerns to council. But when they arrived at McKeesport City Hall on Jan. 6, they were told the meeting was closed to the public, and they could only submit written comments. Now, the ACLU of PA has filed a lawsuit against McKeesport City Council over the residents and advocacy members being barred from attending, both in person and virtually. The ACLU says this was a violation of the Sunshine Act, according to a press release. Pennsylvania's Sunshine Act regulates the state's open meeting rules.

“The right of the public to participate in government affairs is a cornerstone of our democracy. There is no excuse for the McKeesport City Council to limit that fundamental right of city residents,” says ACLU of PA director Reggie Shuford.

The lawsuit stems from the events of Dec. 20, 2020 in the small Mon Valley city. That day, the city was virtually on lockdown just hours after a McKeesport police officer was allegedly shot by a suspect, who was later identified by police as Koby Francis. The officer was in stable condition following the shooting and has since recovered.

Several law enforcement agencies conducted checkpoints and alleged warrantless searches in an attempt to locate Francis just hours after the shooting. Police blocked off roads and searched every car crossing the McKeesport-Duquesne Bridge, even stopping some cars to check trunks. There were also reports of several homes being searched by the police, and residents said police did not provide warrants.

Advocacy groups and legal experts from the American Civil Liberties Union of Pennsylvania said the police’s response was an overreach of authority and potentially a violation of the Fourth Amendment, which prohibits unreasonable search and seizures. Francis was located more than a week later in West Virginia.

Outcry from residents and the advocacy group Take Action Mon Valley was instantaneous, and many of them planned to speak at the Jan. 6 council meeting. But when they arrived at McKeesport City Hall that night, the meeting was closed to the public, allegedly because of the rising cases of COVID-19 throughout Allegheny County.

Fawn Walker-Montgomery, the executive director of Take Action Mon Valley, was not shy about expressing her frustration over being barred from the meeting.

“Canceling the January meeting was a clear response to a Black organization organizing Black people to show up at the meeting and share their voices and concerns regarding police misconduct,” says Fawn Walker-Montgomery, executive director of Take Action Mon Valley. “They knew that we were coming and chose to hide.”


“It’s apart of our constitutional rights to present to our government at public meetings etc. Moreover, to watch & participate in all public mtgs. held by elected officials. These rights shouldn’t be ignored because those in power don’t like the topic or person/org. presenting”. https://t.co/QDyazL8CZa

According to McKeesport City Council meeting minutes from Dec. 4, McKeesport Mayor Michael Cherepko did mention that, because of the pandemic, “there’s probably a good chance that we are probably going to refrain from the public unless someone wants to speak about an Agenda Item.”

The ACLU also sent a letter to McKeesport council president and Cherepko asking them to provide in-person or virtual comments for a Feb. 3 council meeting, but that meeting was canceled.

Shuford says this is in violation of people’s rights to observation and public participation.

“Other municipalities have been able to safely provide for public access to council meetings during the COVID-19 pandemic,” says Shuford. “McKeesport City Council must find a way to follow the lead of these other municipalities and allow safe, real-time access to meetings.”

According to the Pittsburgh Post-Gazette, ACLU attorneys then received no response after they spent two weeks asking the McKeesport solicitor how council would address the participation issues before a meeting on March 3.