CP Photo: Jared Wickerham
A bail bonds location near the Allegheny County Jail in Pittsburgh
Jails across Pennsylvania, unlike prisons, are meant to hold people charged with crimes before they stand trial for their charges. People in jail are not convicted, and are merely awaiting their day in court. Pennsylvanians might think, then, that jails — with people incarcerated before they are proven guilty — are only for people charged with violent felonies and others forced into detainment by judges.

But that is not the case, according to a newly released report from ACLU of Pennsylvania.

By taking data from the Administrative Office of Pennsylvania Courts over a two-year period from 2016 to 2017, and from more than 383,000 cases, the ACLU determined that of the more than 166,000 cases assigned cash bail, over half of those cases’ defendants were not able to post bail, and thus were sent to county jails.

Jessica Li, a Criminal Justice Investigator for ACLU of PA, says assigning cash bail with such a large number of people being detained in jail is against state law.

“The large number of Pennsylvanians in jail due to cash bail is because Magisterial District Judges are breaking the law, and not setting cash bail low enough,” says Li. “It then becomes a covert mechanism for pretrial detention.”

The Pennsylvania Constitution says the only time the government may jail someone pretrial and avoid setting a type of bail is if a person is facing a capital or life sentence, or if no condition or combination of release conditions can assure the safety of another person or the community.

According to the ACLU, cash bail was used by Pennsylvania MDJs more often than any other bail types during the study period. Cash bail represented more than 43% of all bail types, while ROR was used in about 22% of cases. Cash bail was used more often in urban areas (45.4%) compared to rural (37.1%), but rural defendants were often less likely to be able to post bail.

The average statewide cash bail amount was $38,433, which is more than half of the average household income in Pennsylvania. Many times, MDJs assigned defendants just a percentage of the assigned bail (typically about 10%), but sometimes defendants received straight bail, and had to secure the full amount.

Li says cash is only supposed to be used as an incentive to get defendants to show up to their next court day, not to hold people in detention who can’t afford it. The ACLU is calling on MDJs in Pennsylvania to set ROR bail far more often than they are currently, and if they must set cash bail, to make the amounts affordable to people of all income levels. 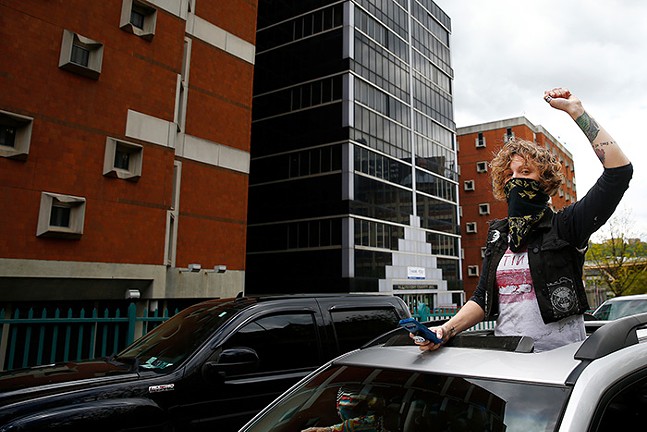 CP Photo: Jared Wickerham
A 2020 demonstration outside the Allegheny County Jail protesting conditions for Black women and calling for the end of cash bail
“We don’t take issue with cash bail in principle, but it has to be affordable, and it has to lead to someone’s pretrial release,” says Li. “The law very clearly says that bail, if the system is functioning as it should, then every person should be posting it.”

Even in Armstrong County, a rural county northeast of Pittsburgh that had the lowest average bail amount at just over $15,000, defendants struggled to make bail. Over 56% of defendants there didn’t post bail between 2016-2017.

“The bail bonds industry only exists because MDJs aren’t setting bail in the way that the law requires,” says Li. “If MDJ were following the law, even when they set bail, defendants would be set free before trial.”

According to the Brennan Center for Justice, those held for pretrial detention are four times more likely to be sentenced to prison than defendants released prior to trial, due in part to defendants making hurried decisions to plead to lower charges just to get out of jail. Li says jurisdictions like Washington, D.C. have largely eliminated the use of cash bail, but have not seen increases in recidivism rates.

Furthermore, a November 2020 report from criminal-justice reform think tank Prison Policy Initiative found that, out of 13 jurisdictions across that county that have instituted pretrial reforms, 12 saw decreases of negligible increases in crime rates after they instituted the reforms.

The ACLU of PA report also notes that Black defendants are being disproportionately assigned cash bail, and given larger amounts of cash bail than their white counterparts. Among Black defendants statewide accused of a crime, MDJs set cash bail in over 55.2% of cases, compared to only 38.5% for white defendants.

Rural Western Pennsylvania counties were among the worst offenders in this disparity, even though the Black population is very small in these counties. Somerset County, with just 3% Black residents, had the severest disparity. The report notes that “for Black people in Somerset, the rate of cash bail was three times the rate for white people; and, when assigned cash bail, the amount was more than double the amount of their white counterparts.”

Li says she doesn’t want to broadly paint all judges as being immoral and just “wanting to throw everyone behind bars.” She says many judges are doing the right thing, noting that Centre County had the highest rate of ROR with one judge there setting ROR in 98.4% of their cases.

“There are definitely some bad actors but also judges leading the way and showing reform is possible,” says Li.

On Jan. 9, Allegheny County MDJ Mik Pappas tweeted that he hasn’t used cash bail in over two years in his district, which covers several neighborhoods in Pittsburgh’s East End. Pappas told Pittsburgh City Paper in January 2021 that he uses several different strategies to avoid assigning cash bail, including community-sponsored release, which provides services like helping to find housing, employment, and rides to court for defendants whose judges determine they might not show up to their court date.

“We have a responsibility to report to the public,” said Pappas in 2021. “When I think of how much we rely on incarceration and arrest, and I see how much it impacts people’s lives, we need to think of opportunities of diversion.”