Exploring contemporary America through poetry can be problematic. The topic lends itself to cliché and didacticism. Yet when Ben Lerner handles this thorny subject matter, it's with an intricate grace that's rarely esoteric.

Here is the poet, from his 2006 National Book Award finalist Angle of Yaw: "All across America, from under- and aboveground, from burning buildings and deep wells, hijacked planes and collapsed mines, people are using their cell phones to call out, not for help or air or light, but for information."

This, too, is Lerner: "We are a mean and stupid people. But not without smooth muscle."

Lerner is new in town. He recently moved from Berkeley, Calif., to teach poetry at the University of Pittsburgh. At 28, he's an established force in the world of poetry. He's lived and written in Madrid, as a Fulbright scholar. Since 2002, with Deb Klowden, he's co-edited No: a journal of the arts, a poetry biannual whose most recent issues included work by the likes of John Ashbery, Juliana Spahr and Mei-Mei Berssenbrugge. Lerner's first book-length work was 2004's The Lichtenberg Figures, a critically acclaimed sonnet sequence.

The philosopher Theodor Adorno referred to aesthetic form as "sedimented content." In Angle of Yaw, Lerner draws on Adorno's theories and creates formal sediment: seamless layers of images built upon images. Angle of Yaw contains five long poems, two of which share the title "Angle of Yaw." Each poem consists of prose pieces spanning multiple pages. The "Angle of Yaw" poems are, perhaps, the most compelling in the book: These dense, potent morsels of prose poetry mimic and address social discourse, and ground the book in present-day America.

In his review of Angle of Yaw in The Boston Review, Craig Morgan Teicher wrote: "The best of [Lerner's] poems [in Angle of Yaw] arrive at arresting lines that are comical, anxious and hauntingly true, or at least haunting [...] They illuminate and confound, like aphorisms or koans clipped from glossy magazines."

Consider this, from Lerner:

"No matter how big you make a toy, a child will find a way to put it in his mouth. There is scarcely a piece of playground equipment that has not been inside a child's mouth. However, the object most responsible for the greatest number of choking deaths, for adults as well as children, is the red balloon. Last year alone, every American choked to death on a red balloon."

So much contemporary poetry relies on either (1) attempts to re-create history and memories through narrative (think confessional poetry) or (2) the exploitation of jarring juxtapositions (think impenetrable, fragmented "experimental" work). Lerner destabilizes these formal techniques. His prose pieces utilize a clear, narrative tone that's neither confessional nor didactic. While his imagery flows seamlessly, it encourages the reader to consider complex ideas and themes.

For example, in the "red balloon" piece, consider the contradictions illuminated by Lerner's seemingly concise and lucid prose. If children are socially constructed as the opposite of adults, why are adults here likened to children? If playgrounds are for "play," why do they have "equipment" -- a term associated with work? And, certainly, a red balloon is not typically associated with death.

Lerner began teaching at Pitt this semester. In the classroom, he emphasizes his approach towards poetry as a craft. "I insist that poems are objects to be experienced and not just descriptions of experience," he said in a recent e-mail interview. "My consistent focus is on how the structure of a work determines its sense and vice versa."

"We had over 200 applicants for the poetry position," says David Bartholomae, chair of Pitt's English Department. "In this context, we knew immediately that Ben's work was special -- distinctive, challenging, innovative, engaging, unforgettable."

Currently, Lerner is interested in "how poetry can track failures of representation -- hesitation, doubling back, interruption, etc. -- in a manner that more accurately measures the experience of speaking and thinking in time than the facile resolution and polish characteristic of much contemporary poetry.

"My new book is in part a love poem, or a poem about the possibility of writing a contemporary love poem," he adds. "My hope is that by staging little failures of expression I can figure an affection I cannot describe without falsification."

In geology, some sedimentary rocks form when seemingly disparate materials -- plants, morsels of sea creatures, sand granules -- bind to create a solid surface. Because these rocks can take thousands or even millions of years to form, they carry history: Scientists look to them to understand the past. Lerner's Angle of Yaw poems are important because their own "sedimented content" captures the nuances of present-day America. From "peanut butter and propaganda" to motels and conceptual art, to child actors and "Christian notions," Lerner's poems possess the potential to inform and educate generations of readers to come.

Two excerpts from Angle of Yaw, by Ben Lerner:

"Reading is important because it makes you look down, an expression of shame. When the page is shifted to a vertical plane, it becomes an advertisement, decree, and/or image of a missing pet or child. We say that texts displayed vertically are addressed to the public, while in fact, by failing to teach us the humility a common life requires, they convene a narcissistic mass. When you window-shop, when you shatter a store window, you see your own image in the glass."

Correction: An earlier version of this story incorrectly stated that Lerner's Angle of Yaw won a 2006 National Book Award prize. 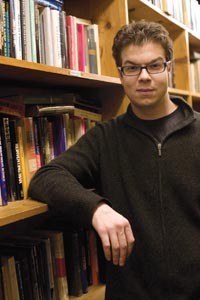