Odedra to dance program of four solos in his Pittsburgh debut

Though trained as a classical Indian dancer in the Kathak and Bharatanatyam disciplines, noted dancer/choreographer Aakash Odedra has found his biggest successes working outside those strict traditional dance forms. Grabbing a place in the contemporary dance spotlight in 2011, and basking in it since, the native of Birmingham, England, has wowed audiences globally with work combining elements of classical Indian dance with contemporary styles.

As part of the Pittsburgh Cultural Trust’s India in Focus festival, Odedra’s Aakash Odedra Company makes its Pittsburgh debut with the program titled Rising (2011) on Sat., Nov. 6, at the Byham Theater.

Literally a one-man show, Rising is a series of four solos danced by Odedra, who is the lone performer in his company.

Like Pittsburgh native and rising dance star Kyle Abraham, Odedra’s ability to rivet the audience’s eyes with his unique talents has led choreographers to want to work with him, presenters to want to book him, and award-givers to honor him. 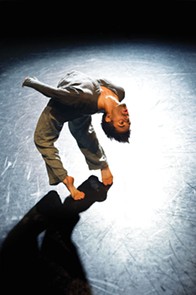 The program, however, will begin with Odedra dancing one of his own creations, “Nritta,” meaning “pure dance.” The solo in the Kathak style celebrates Odedra’s dance roots in a work about the Hindu deity Shiva and the merging of masculine and feminine elements into a perfect balance called “ardhanareshwara.” Writes Odedra on his website: “‘Nritta’ is the exploration and discovery of time, space, rhythm and how one’s potential energy affects the relationship with them.”

Khan’s “In the Shadow of Man,” set to music by English composer Jocelyn Pook, explores Khan’s self-described fascination with the “animal” within us. In a YouTube clip of the solo, Odedra embraces his inner primate in stylized choreography that speaks to the primitive ancestors from whom we evolved and who are still part of our collective DNA.

Rounding out the program, Cherkaoui’s “Constellation” is inspired by the different sound patterns and different sources of light that come together to create a constellation.