About 8,000 immigrants in Pennsylvania may not become citizens in time to vote this year | News | Pittsburgh | Pittsburgh City Paper

About 8,000 immigrants in Pennsylvania may not become citizens in time to vote this year 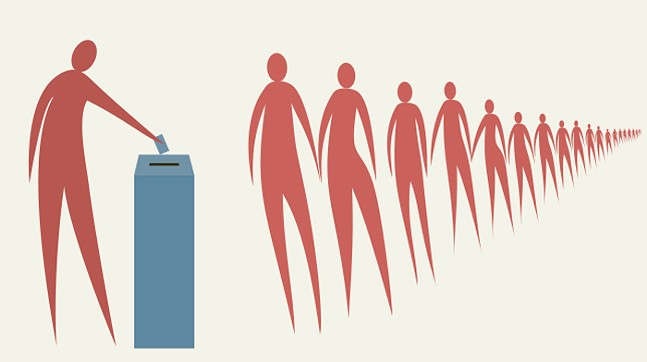 According to a new report, there are about 315,000 immigrants in the U.S. who are on the path to become naturalized U.S. citizens, but likely won’t get to citizenship by November. This means they won’t make it in time to participate in one of American citizens’ most sacred rights — voting — in one of the most contentious elections in the country's history.

Of those, it’s estimated that about 8,000 immigrants in Pennsylvania likely won’t naturalize in time to vote. In a state that President Donald Trump only carried by about 44,000 votes in 2016, those potential votes could make a big difference come November.

According to Boundless Immigration, the Seattle-based naturalization services company that authored the report, the backup of cases was caused when naturalization offices were closed from March through April due to the coronavirus pandemic, and many of those naturalization interviews that were rescheduled during the closures have yet to be completed. This leaves several thousand immigrants, who have qualified for and have started the naturalization process, in limbo.

“In a normal year, everyone passing their naturalization interview during the five months between April and August would have reasonably expected to take the oath and become a U.S. citizen within the next two months, in time for most states’ voter registration deadlines in October,” according to a post by Boundless Immigration.

Since April, the naturalization backlog among Pennsylvania immigrants has grown from 1,587 people to 7,933 people. Boundless determined these estimates through data from the Department of Homeland Security.

This comes at a time when the agency that naturalizes immigrants, the U.S. Citizens and Immigrant Services department, is facing the potential of massive furloughs due to a loss in revenue, which it normally receives in fees from immigrants applying for naturalizations and other services. Without a bailout the agency is requesting from Congress, the USCIS is facing a 70% reduction in staff, making it likely impossible to finish naturalizations for those waiting, or for others to start the process.

“If that happens, the agency would be left with a skeleton crew that will make it difficult to sustain our critical mission of administering our nation’s lawful immigration system,” said USCIS deputy policy director Joseph Edlow in a statement to New York immigration news site Documented.

These potential furloughs could impact the local USCIS office in Wilkins Township, and 25 workers there could be out of work, said 16-year field office employee Tom Vacca, according to TribLive.

Randy Capps of the Migration Policy Institute told the Arizona Republic that immigrants who don’t receive an oath ceremony or complete their application by October will not be able vote in Arizona, since the state’s voter registration deadline is Oct. 8 this year. Pennsylvanians may have a slightly more time since the commonwealth’s voting registration deadline is Oct. 19.

“All [the Trump administration has] sent Congress is a one-page letter that provides virtually no information on the shortfall or proposed remedies,” said Evan Hollander, a spokesperson for the House appropriations panel, according to CBS News.

The longer the bailout is not allocated to the USCIS, the greater the chances that the immigrants aren’t naturalized this year and in time to vote. An estimated that 2,100 immigrants will run out of time to vote each day that USCIS offices remain closed, according to Boundless Immigration. Starting at the beginning of this month, USCIS offices reopened for social-distant services, but without a bailout there is the potential that some offices could close and the naturalization process would certainly slow down for many immigrants. And that means less new voters in a potentially powerful new voting block.

Pennsylvania Immigration and Citizenship Coalition director Sundrop Carter believes the state’s growth in naturalizations is a response to the multiple attacks Trump has perpetuated against immigrants. Federal immigration officers in Pennsylvania are the most aggressive in the country.

“The anti-immigrant climate in this country, far from deterring communities, has become a driving force to attain citizenship,” says Carter in a press release. “With this much level of enthusiasm, new Americans will have a dramatic impact on local, state, and national races. That’s the political capacity these New American Voters have.”