Spotlight PA is an independent, nonpartisan newsroom powered by The Philadelphia Inquirer in partnership with PennLive/The Patriot-News, TribLIVE/Pittsburgh Tribune-Review, and WITF Public Media. Sign up for our free newsletters.

When Melissa Reed became CEO of Planned Parenthood Keystone in 2016, she had one goal: to expand access to reproductive health care in Pennsylvania.

“I want to make sure that Pennsylvania can continue to provide [abortion] care to whomever needs it regardless of where they live or their zip code,” said Reed.

Planned Parenthood Keystone runs over half of the 17 freestanding abortion clinics in Pennsylvania, servicing patients beyond the Philadelphia and Pittsburgh metros.

When Keystone’s Lancaster facility — which never provided abortion services — closed in April 2020 due to the pandemic, Reed saw an opportunity in the setback.After years of planning, the organization reopened the clinic 10 minutes away from its old location and arranged for it to offer a new service it previously couldn’t: medication abortions.

Reed said the change of address presents the provider’s best option for handling a tide of new patients and advancing her mission of expanding access to reproductive care.

The new facility has limits, however: It will not offer surgical abortions. “It would cost me millions of dollars to build a new surgical site,” said Reed. “What I know is the majority people seeking abortion now request medical abortion and providing medical abortion does not require those same ambulatory surgical center provisions.”

In Pennsylvania, the thicket of restrictions on abortion providers shapes the number of abortion facilities in the state and limits the services they can provide, effectively circumscribing access to the procedure.

As providers across Pennsylvania deal with a surge in patients from neighboring states following the U.S. Supreme Court striking down Roe v. Wade, those barriers have pushed them to focus on retooling their services to offer medication abortions and telehealth, and to consider alternatives to new brick and mortar sites, such as mobile clinics for more rural areas.”What I’m really looking at is how can I expand access to the most requested type of abortion care needed in a way that makes it the most successful and most affordable for our patients,” said Reed.

Providers also are anxiously waiting to see who will take over the governor’s office following the November election — some of them are unsure whether they’ll have a job after January.

“Of course, we want to expand and provide care for people,” said Sara Dixon, a spokesperson for Planned Parenthood of Western Pennsylvania. “It would provide another place where people could receive care and just relieve some of the pressure on the two clinics [in Pittsburgh]. But we have to wait until the end of November … I feel like everything is on the line. "

Republican gubernatorial nominee Doug Mastriano, a state senator from Franklin County, has called abortion his “No. 1 issue” and has proposed banning the procedure at six weeks with no exceptions for rape, incest, or the life of the pregnant person. And the Democratic nominee, Attorney General Josh Shapiro, has vowed to veto any legislation that would further curb abortion access.Providers are watching the race closely, they told Spotlight PA, but are more immediately focused on navigating the current landscape rather than changing it. Most providers predict a six-week ban will go into effect if a Republican becomes governor. And even if the office remains under Democratic control, providers do not anticipate abortion access in the state expanding, due to the prospect of a Republican-controlled legislature.

“We have to work with the legislature and right now we don’t have the majority that has the will [to protect abortion rights],” said Reed.

Abortion is legal in Pennsylvania up to 24 weeks into a pregnancy, though less than a quarter of the state’s freestanding abortion clinics are able to provide abortion care through that time period due to restrictions on facilities. Most of the clinics are concentrated in cities on the eastern and western edges of the state. An additional five abortion providers are attached to hospitals.

Over 85% of counties in the state have no abortion providers. 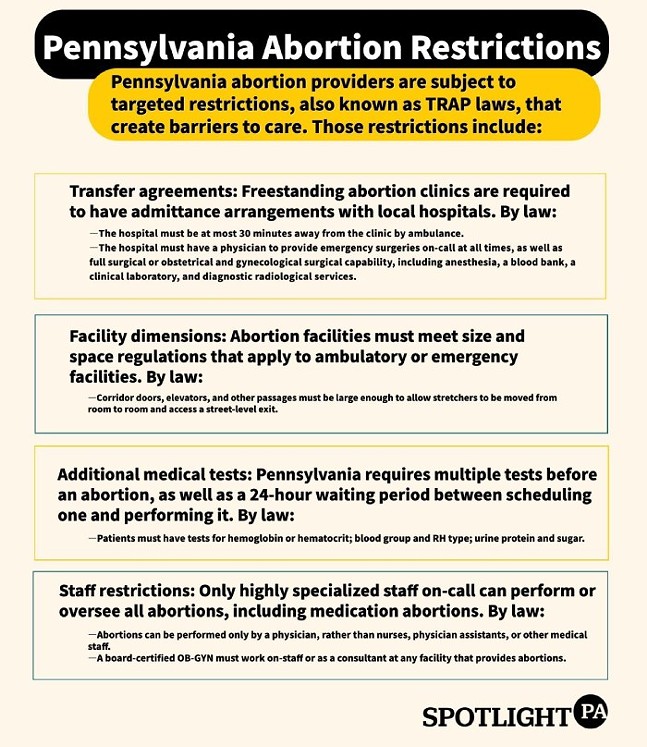 Spotlight Infobox: Kate Huangpu
In Pennsylvania, restrictions on abortion providers shape the number of abortion facilities in the state and limit the services they can provide.

Those restrictions include a mandatory 24-hour waiting period for people seeking abortions, no Medicaid coverage except in cases of incest, rape, or when the person’s life is endangered, and blood and urine tests that health care workers argue are unnecessary..

Abortion clinics have to abide by facility rules mandating specific room sizes and corridor widths. Those particular restrictions influenced Planned Parenthood Keystone’s decision to open a location that provides medication abortions but not surgical ones, explained Reed.According to Reed, a majority of patients now seek medication abortions, also known as medical abortions or abortion by pills, in part because that procedure requires less travel and fewer appointments.

Reed explained it would have cost millions of dollars to equip the new clinic to legally offer surgical abortions, a procedure that has more stringent facility rules. Planned Parenthood Southeastern Pennsylvania operates most of the clinics that provide such abortions.

Given those obstacles, Planned Parenthood Keystone, which oversees nine of the state’s clinics, plans to expand abortion access under the parameters that currently exist, an approach that has become the consensus among providers in the state.

Following the leak of the eventual Roe decision in May, Pennsylvania clinics began receiving record levels of calls from people seeking answers and appointments from within and outside Pennsylvania. Anticipating greater demand, providers hired more patient navigators, expanded appointment availability, and recruited volunteers to help them answer phone calls.

On the day of the leak, Allentown Women’s Center received over 400 calls, a spokesperson told Spotlight PA, a 100% increase from its pre-Roe average. In response, the center organized a new volunteer program to help with answering phones to allow health workers to focus on providing care.

Planned Parenthood of Western Pennsylvania hired four new health care workers — including assistants, clinicians, and registered nurses — as well as more administrative staff.When the official ruling was made, call volumes again spiked. For Allegheny Reproductive Health Center, the only other freestanding abortion clinic in Pittsburgh, call volume increased to 10 times the rate before the court decision was made, Medical Director Sheila Ramgopal said in an August public hearing on abortion access.

Despite this uptick in need, most providers do not plan to build new clinics. Reproductive health care workers say Pennsylvania’s legal restrictions and the uncertain future of abortion rights in the state make opening clinics too risky of an investment.

“We are absolutely thinking strategically about how we can continue to provide care [under new restrictions],” said Lindsey Mauldin, a spokesperson for Planned Parenthood Southeastern Pennsylvania, “but at this point, we’re laser-focused on providing care because it’s still legal.” 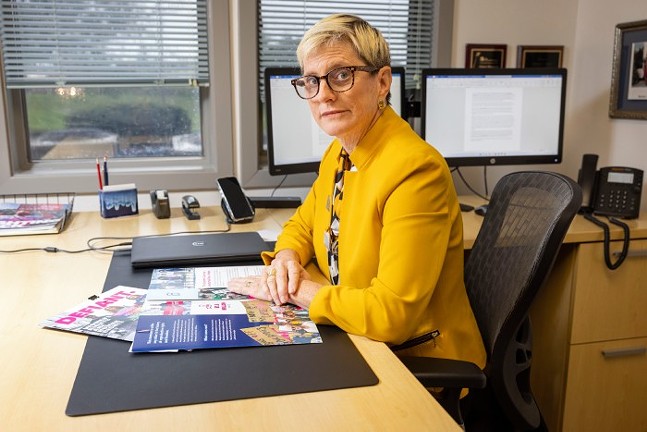 Boosting staffing at existing clinics also isn’t cut and dry, providers said.The Women’s Centers, which has locations in Philadelphia and Delaware County, already faced labor shortages due to the pandemic. When it saw the influx of calls and patients brought forth by the Dobbs decision, the center was able to call in employees from its Georgia and New Jersey locations to boost staffing, but workers were already drained and the schedule was at capacity.

Additionally, state mandates allowing only physicians to perform abortion care prevents providers from hiring medical professionals such as doulas, midwives, and physician assistants. Lizbeth Rodriguez, a community engagement coordinator for The Women’s Centers, described having to turn away such workers when they reached out following the Supreme Court ruling.

When asked about obstacles to expanding access, she said “it’s 100% the legal restrictions.”

The millions of dollars required to open a new facility capable of providing surgical abortions aren’t attainable for most abortion clinics, explained Reed of Planned Parenthood Keystone — even for a large organization such as hers.In 2019, the most recent year for which data are available, Planned Parenthood Keystone had a total revenue of about $10.5 million. Half of that went to salaries, while the other half went to expenses, leaving them at a deficit of nearly $200,000. A spokesperson from the organization said that the new Lancaster center was funded mostly by donations.

For smaller independent clinics, a new property is entirely out of the question. Allentown Women’s Center has one doctor and two nurses, and spokesperson Ash Turner said “there’s a lot of uncertainty about the future.”

“We have no plans to expand or open a new clinic when abortion rights may become much more limited in the future,” added Turner, the clinic’s outreach coordinator. “Our clinic is not likely able to continue with the business if we’re not able to provide abortions. It would be fairly devastating.”

As potential changes loom, abortion providers in Pennsylvania are looking for more immediate ways to make abortions accessible across the state within the current restrictions.

Planned Parenthood Keystone plans to launch mobile health clinics using networks of vans that could provide abortions in more remote areas of the state. Similar programs have recently launched in Colorado, Minnesota, and Montana. And Planned Parenthood has announced plans to open one in Illinois by the end of the year.

In Pennsylvania, the organization is in the process of reaching out to hospitals, assessing how many mobile units to purchase, and researching existing programs. The project is not “fully conceived” yet, Reed said, and could become unviable if further restrictions on reproductive health are enacted by the next governor.

Providers also are investing in telehealth, which they say will make abortion pills more accessible. The Food and Drug Administration permanently legalized receiving abortion pills through telehealth in 2021, which allowed the medication to be sent by mail rather than distributed only by specialized pharmacists. The Pennsylvania General Assembly previously resisted efforts to provide abortion medication this way on the grounds that abortion pills were not fully approved by the FDA, but those efforts were vetoed by Democratic Gov. Tom Wolf.

Telehealth makes it easier for patients to get medication abortions, as they do not have to travel to physical clinics for their mandatory consultation with a physician, nor do they have to travel back after the 24-hour waiting period.

Additionally, nearly all of Pennsylvania providers have been engaged in a lawsuit over whether abortion care — which can range from $400 to $1,000 — can be covered by Medicaid in all cases, not just those of rape, incest, or the life of the parent. The case is currently before the state Supreme Court for oral arguments.

But beyond these efforts, reproductive care workers are largely focused on the day-to-day work of ensuring patients can access care now, a position that underscores how little say they have in what comes after the November election.

“We’ll just have to cross that bridge when we get there,” said Shelly Fleming, the center manager of a Planned Parenthood clinic in Reading. “It’s very unpredictable at this moment so we really don’t know.”