“I want to make the weirdest beer you’ve ever had that still tastes good to drink a pint of it.” 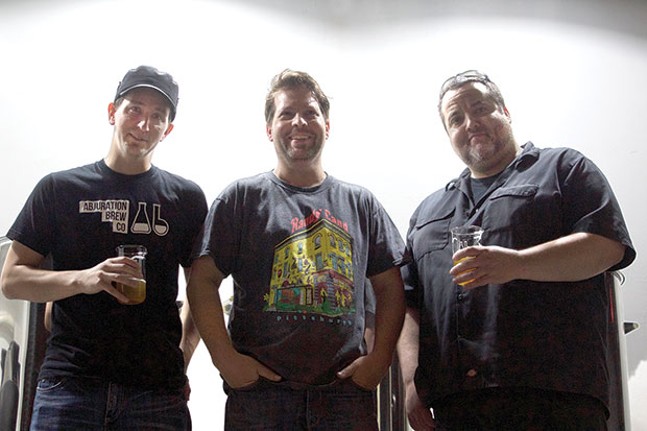 “It’s unbelievable what you can get done and hold other jobs,” says Pints on Penn bartender Tom Glover.

Glover is one half of the team of the yet-to-open Abjuration Brewing. Dave Hallam, a computer programmer at the University of Pittsburgh, is the other. The seed for the project was planted when Hallam’s wife bought him a home-brew kit. He became enamored of the process and the home-brew community. Soon, Glover joined him and the two started brewing together. “Tom really affected my recipes,” says Hallam. Seven years and many beer-festival test runs later, they’re on the cusp of opening Abjuration Brewing in McKees Rocks’ Parkway Theater, which is also currently under renovation. They hope to open the doors in July.

Brewing isn’t the pair’s only connection. Both Hallam and Glover are long-time gamers, and they choose the brewery name accordingly. “There’s a school of magic in D&D [Dungeons and Dragons] called abjuration. It means the renunciation of an oath,” says Glover. “There are all of these weird, old-school laws in beer, we don’t want to play like that. If you’re going to be an artist, you get to be an artist.” Glover and Hallam are both dedicated to exploring new pairings, styles and flavors in their beers. “I want to make the weirdest beer you’ve ever had that still tastes good to drink a pint of it,” says Glover.

CP photo by Krista Johnson
The exterior of the Parkway Theater

Instead of following the naming trend in craft beer which errs toward the cute and ridiculous, Hallam and Glover will use “versioning” for their beers. Pulling from Hallam’s background in programming (he built the website, so expect it to be updated regularly), each beer recipe will start at version 1. If any changes are made to the base recipe, like using a different blend of hops, each resulting recipe will be the next-numbered version. Hallam and Glover hope that this will allow customers to taste differences and enable them to request specific preferred versions.

Abjuration will also be an open-source operation. Every recipe will be available to the community. “We’ve always shared recipes in the home-brewing community. That’s how I learned to brew beer,” says Hallam, “We’re home-brewers, we’re just going to be on a bigger system.” Abjuration will brew on a one-barrel system and a two-and-a-half barrel fermenter, making Abjuration a nano brewery. Hallam and Glover say this gives them brewing flexibility to test risker recipes and use fresh ingredients. “I’d like to have 12 different beers rolling all the time,” says Glover.

Hallam and Glover are also excited to be working side by side with the 50-seat Parkway Theater. Once both businesses are open, customers will be able to take their Abjuration brews to see a movie, or stop by for a pint afterward. “The Parkway has been a great part of the community for awhile. I definitely think it’s going to be an anchor on that part of the street,” says Glover.