Located neither in Pittsburgh nor particularly near any of our famous steel mills, Pittsburgh Mills is a mall that nonetheless makes an unusual effort to evoke the local. Call it overcompensation -- what with all the Warhol quotes and silhouettes of distant Downtown landmarks amid the latest in gleaming, overscale retail -- but there's no denying that the Mills also has a generous share of local businesses; official Pirates and Steelers stores, not to mention a generalized Pittsburgh Sports Store, plus outlets for an Indiana County winery (don't tell the PLCB!) and a Jefferson County smokehouse.

And what do you know: If you're in the mood to eat on the premises, Pittsburgh Mills also has local restaurants. While the freestanding establishments in the parking lots are all the chains you've ever seen before, the Galleria itself features mostly local options. Abaté Italian & Seafood Restaurant relocated here from its original location, down Route 28 at the Waterworks. It left behind its distinctive red-neon fish sign, but brought with it a menu with a strong emphasis on fresh pasta and seafood in a variety of styles. There are also plenty of other choices, including sandwiches, meat dishes and a variety of dinner salads.

Embedded in a list of familiar appetizers are a couple of standouts, including Italian variations on steamed mussels and spinach-artichoke dip, but we chose to test the kitchen's mettle on a small pizza. Our five-cheese pie featured a thin, chewy crust and excellent flavor from well-matched cheeses. Jason thought the rim of the crust could have had a bit more crunch, but Angelique appreciated that it had been baked to a beautiful deep golden-brown, and not rushed out of the oven.

Looking to consolidate Abaté's strengths, we ordered shrimp carbonara, an intriguing modification of the bacon-and-eggs classic. In this dish, bacon is combined with prosciutto, mushrooms, roasted red peppers and small Florida rock shrimp in a tomato cream sauce. It was a dizzying list of ingredients, and they didn't quite come together. The tender, bite-sized shrimp were plenteous, and the cured pork flavors nicely restrained, but the thick slices of portabella seemed to add little, and the dill in the sauce failed to relate to anything else in the dish. On the other hand, the noodles were superbly cooked, tenderly al dente in the way that only fresh pasta can achieve. The broad noodles were also well-paired with such a busy dish, providing a simple base for the other flavors.

Peppercorn steak, which is a 12-ounce "London block" -- apparently another name for flat-iron steak -- was seared with peppercorns, topped with gorgonzola and garlic mushrooms, and finished with an asiago-peppercorn sauce. The sauce was not much in evidence, but the steak was well cooked and admirably tender. Bubbling on top, the cheese added salty, tangy notes to the steak's big, beefy flavor, but the mushrooms once again seemed mostly decorative. Angelique's favorite part of this dish was the shoestring sweet-potato fries on the side. Though Jason found them a bit salty, their texture was extraordinarily crisp, and the distinctive sweet-potato flavor shone through an otherwise delicate seasoning, including finely ground black pepper.

Finally, we sampled a more casual entrée, the chicken asiago sandwich. A thick, juicy cutlet, crisply breaded, was layered with bacon, asiago cheese, lettuce, tomato and onion between slices of thick toasted focaccia to make a sandwich whose thickness was a challenge to even such big mouths as ours. While the ingredients were high quality, the garlic mayo did disappointingly little to hold them all together, either physically or flavor-wise.

Abaté has been keeping up shoppers' strengths for a couple of decades now, and its menu and décor have evolved to keep up with current styles. In its new location, there is evidently real talent in the kitchen. If its more innovative dishes take on the excellence of its basics, such as pizza, sweet-potato fries, homemade pasta and a simple chicken cutlet, Abaté could further evolve into a destination in its own right. 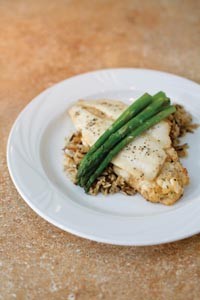