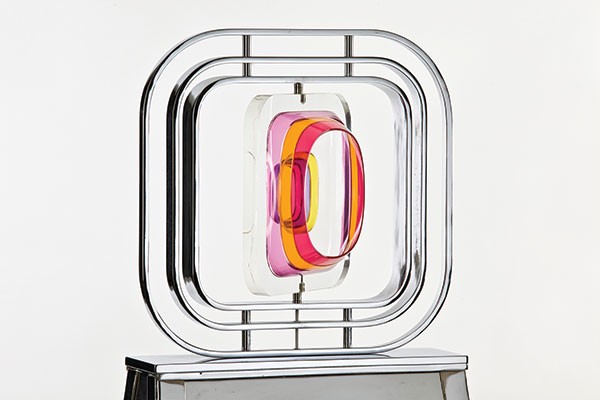 Making the road trip to the Westmoreland Museum of American Art, in closer-than-I-remembered Greensburg, I expected small sculptures on widely spaced pedestals. Instead, I entered a veritable funhouse, an arcade-like gallery packed with colored Plexiglas and chrome constructions — some kinetic, some illuminated — that were originally futuristic and are now retro, as well. Picture an exceptional 1960s-'70s vintage shop and you've got the mood. Put Mad Men aside; this is the real thing.

While Art(ist) in Motion emphasizes Aaronel deRoy Gruber's sculpture, I'd tag the exhibit a survey and almost a retrospective, with more than 50 sculptures, a dozen photographs, jewelry, early paintings, a video work and photo documentation. The main difference between this and a retrospective, besides the lack of a catalog, is that a retrospective would take a more balanced approach to deRoy Gruber's split-toned infrared photographs. These dominated her art-making from the '80s to the '00s, and it's for them that she is best known. She died in 2011, just shy of 93.

DeRoy Gruber's sculptures also have something of a following, remembered by some and revisited in recent exhibits around town. In a welcome civic action last year, her large aluminum "Steel Cityscape" (1976) was installed in Mellon Park. Its precise jumble of interlocking rounded squares is pressed up against Penn Avenue, where it can be appreciated at a glance by car or lingered over on foot.

While some of the sculptures here are from as recent as the '80s, along with some of the slicker undated pieces that are presumably "later," the exhibit is dominated by examples from the late '60s and '70s, with their vaguely utopian, countercultural aesthetics. While acidheads doodled away in horror vacui, "serious" sculpture in the '60s was dominated by minimalism, shedding the embellishments of the past as aggressively as did modern architecture. DeRoy Gruber shares minimalism's constrained vocabulary of geometric form as well as its penchant for shrugging off narrative, iconography, the emotion-signifying surfaces of abstract expressionism and most symbolic associations except for artistic freedom.

Once deRoy Gruber got started in sculpture — at the urging of legendary sculptor David Smith, no less — she threw herself into it. She employed the relatively new material of colored Plexiglas, and worked permutations of circle, square, cube and her signature rounded square in hundreds of sculptures large and small. DeRoy Gruber's foray into sculpture coincides with a less-is-more time when freedom meant clearing the decks to make way for the new world to come. But deRoy Gruber seems to have been more interested in reaching out to viewers and inspiring them than in challenging or affronting them. Her attitude is closer to the ethos of crowd-pleasing op art than to the oft off-putting severity of minimalism. And there's more than a little techno-utopianism in deRoy Gruber's work, too, from the rounded plastic forms reminiscent of early televisions and personal computers to the embrace of (petroleum-based) acrylic Plexiglas, fully in line with the simple career advice in 1967's The Graduate: "plastics."

There are exceptions, but a typical deRoy Gruber sculpture features a strongly stated base, which for the many motorized kinetic pieces is a good place to conceal the motor. Atop that rests a metal bracket on which a Plexiglas construction can rotate. Even the static sculptures feel as if they're in motion because, as we move around them, the shifting overlaps and reflections of the Plexiglas create a rippling effect.

It was no small matter for deRoy Gruber to move into this area of artistic production requiring collaborations within the almost entirely male industrial world of the time, including the need to develop new techniques and, sometimes, large-scale fabrication. A pleasant surprise at the tail end of the exhibit is a case filled with deRoy Gruber's Plexiglas jewelry — simple in form, cheerful and emphatic in what it is not, namely, filigreed and old-fashioned.

Aaronel deRoy Gruber was a stalwart of Pittsburgh's art community while exhibiting widely, and the timing could hardly be better for re-recognizing her sculptural work, which straddles art and industrial design. It's a crossover of significance in contemporary art from internationally acclaimed artists such as Liam Gillick to some commissioned works in The Andy Warhol Museum's recent "Factory Direct." Plus, the interest in retro-futurism just won't quit; perhaps you've noticed Yvan Pestalozzi's 1972 playground recently installed in front of the Carnegie Museum of Art for the approaching International. What once looked dated has again come to seem fresh.