A year after protests and criticism that it wasn’t inclusive, has anything changed about Pittsburgh Pride? | News | Pittsburgh | Pittsburgh City Paper

A year after protests and criticism that it wasn’t inclusive, has anything changed about Pittsburgh Pride?

“Delta has completely missed the point.” 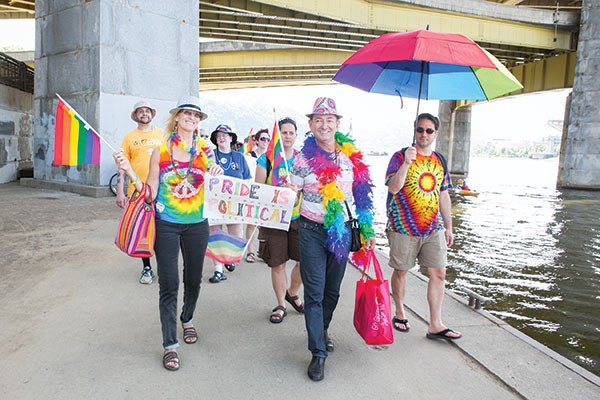 Photo by John Colombo
Roots Pride attendees protest Pittsburgh Pride last June
As Pride events around the country mark the anniversary of the 1969 Stonewall Inn riots, Pittsburgh’s largest LGBT celebration will culminate with a Pride in the Street parade on June 12, the conclusion of week’s worth of programming by the Delta Foundation.

But the local LGBT community has seen some fracturing since last year’s Pride Fest, when Delta was heavily criticized for choosing Iggy Azalea as its headliner despite what many considered her racist and homophobic views. Azalea eventually backed out of the appearance and was replaced by Nick Jonas, but not before some long-simmering resentment of Delta bubbled to the surface. The organization has focused too much on social events at the expense of outreach, its critics charge, and fails to include the entire LGBT community.

“Queer and trans people of color finally got fed up enough with Pittsburgh’s very white gay culture, which frequently ignores the rest of the LBTQIA+ population, too,” says Anne Lynch, operations manager at Three Rivers Community Foundation, which supports LGBT and other organizations. Bringing in Azalea “was just the final straw.”

And despite its pledges to work toward inclusion going forward, those who spoke out against Delta a year ago say little has changed.

“Delta has completely missed the point,” said Michael David Battle, founder of Roots Pride. He and his partner, Joy KMT, started Roots Pride last year, in response to what they viewed as Delta’s narrow focus, one that did not include them. “I don’t see that they’ve made any progress. Trans folks are standing up and saying, ‘We’re not taking this anymore.’”

The incident with Azalea sparked a larger conversation about inclusion in Pittsburgh’s LGBT community. For example, Pittsburgh City Council President Bruce Kraus, the only openly gay member of city council, said in a statement last June that he had reservations about “the long-term vision of Pride’s leadership team. I have serious concerns about the direction of the Delta Foundation and the exclusionary choices it is making. Those concerns have only deepened through conversations with former members of the foundation’s board.”

Founded in 1996, the Delta Foundation was incorporated as a nonprofit “for the purposes of uniting and fostering good fellowship and social interaction among LGBT residents in the metropolitan Pittsburgh area,” according to its website. In addition to Pride Fest, it holds several other events throughout the year, including the Pittsburgh(Red) ball on World AIDS Day, in December. This year’s performers at Pride in the Street, a Sat., June 11 party Downtown, will be the pop singer Kesha and Angel Haze, a hip-hop performer who identifies as pansexual and agender.

After last year’s protests, Delta pledged to reach out to others in the LGBT community to address the inclusion issues. Battle says he has not heard from Delta. Neither has Jason Landau Goodman, the Pittsburgh-based founding executive director of the Pennsylvania Youth Congress, a statewide LGBTQ youth-advocacy organization. “They claimed they met with hundreds of community members, but my organization hasn’t had any outreach from Delta to us. I don’t know who they met with.”

Lynch says her organization attempted to contact Delta last year to outline its concerns, sending a certified letter. “A few months later we got it back — they refused to even sign for it,” she says. “They claim to have talked to hundreds of people since June of last year, who all have a different idea of how Pride should be celebrated. Of that, I have no doubt. However, and again, only to my knowledge, not one person who was critical of their actions has been reached out to.”

Goodman also pointed out last year that the fee for a nonprofit organization to have a booth at Pittsburgh’s Pride Fest was higher than any others in the state, at $450. According to Delta’s website, that fee is the same this year, and it has meant PYC can’t participate.

“We can’t justify using our limited resources in that way, we just can’t afford that price,” Goodman says. “And we enable this structural deficit in the Pittsburgh community if we do pay.”

To be sure, Pittsburgh’s LGBT community isn’t the only one dealing with internal strife surrounding Pride events. On May 31, members of the Greater Philadelphia Gay Officers Action League pulled out of their role as grand marshals for that city’s June 12 parade. Some in the community had raised objections to having police officers involved in a Pride event, given that the original Stonewall uprising was a direct response to a police raid on a gay bar. And in April, Boston Pride rescinded a police officer’s invitation to serve as its parade grand marshal, after he allegedly made racist comments on Facebook.

Goodman says he’s hopeful that the ways the community responds to situations like these will, over time, lead to more awareness and diversity. “We need to create our own funding sources, and with the media being more aware, that gives the microphone to more organizations,” he said. “The more we do the work to bring the community together, the more it will help to showcase the diversity of the community.”

Lynch adds that she doesn’t necessarily have a problem with Delta throwing parties with admission fees to celebrate the LGBT community. “But they then need to reconsider using the word ‘foundation,’” she says. “That implies they give the majority of the money raised back into the community in the form of grants. Openness and transparency are needed, and I have seen none of that in the year since this all went down.”

Delta did not respond to numerous requests for comment, or to answer questions clarifying how the grant funds were disbursed and to whom.

Roots Pride wants to put the focus on helping the trans community by addressing issues like safety and housing, Battle says. Many trans youth, especially those of color, end up couch-surfing or homeless, some as early as age 11 or 12, and many are abused. “I want the other leaders to be ready to delve into these issues of systemic structural violence,” he says.

This year’s Roots Pride events include an evening rally and party at East Liberty’s Ace Hotel on Fri., June 10; a daytime potluck picnic in Schenley Park on Sat., June 11; and a Sun., June 12, prayer walk at the David L. Lawrence Convention Center. Roots is not the only group doing alternate programming to Delta’s Pride Fest. Pittsburgh Black Pride, for instance, will hold a week of events beginning July 25.

“Roots Pride would be happening with or without the Delta Foundation,” says KMT. “Delta has taken the banner of serving the entire population and we haven’t seen evidence of that. They may have reached out to certain people, but Pride belongs to the all the people, and the entire community needs to be represented.”

Battle adds that he doesn’t even view what Roots is doing this year as an “alternative” to Pride Fest. “I haven’t even looked at Delta’s page this year, so I have no idea what they’re doing. We’re just going to continue to create safe spaces for those who need to have their voices heard.”