A white Pa. former candidate tweeted he was Black and gay, and then Patti LaBelle's relative somehow got involved

Dean Browning, left, and Byl Holte, right
Republican congressional candidate Dean Browning lost his primary in Pennsylvania's 7th Congressional District in the Lehigh Valley earlier this year, but today, he is likely more well-known than ever.

On Nov. 8, Browning tweeted “what Trump built in 4 years, Biden will destroy in 4 months.” An innocuous enough tweet that was spread among the right-wing circles of Twitter. But today, a full two days later, a random Twitter user responded to Browning’s tweet, defending former President Barack Obama and Biden. Browning responded to that tweet, and the wheels came off of Twitter.

“I’m a black gay guy and I can personally say that Obama did nothing for me, my life only changed a little bit and it was for the worse,” wrote Browning, who is white and straight. “Everything is so much better under Trump though. I feel respected - which I never do when democrats are involved.”


Republican #PA7 candidate Dean Browning (who lost in the GOP primary this year) clearly forgetting to log into his anonymous account when replying to his own tweet and claiming he is Black and gay and hates Obama. https://t.co/zBa1aJ2UkZ

Browning deleted the tweet, but not before it was screengrabbed, and his deleted tweet then went viral. And this is where it got even weirder.

It was quickly alleged by internet sleuths, including Pittsburgh City Paper, that Browning forgot to switch to another account he might use under a pseudonym or anonymously, thought to be Dan Purdy (@DanPurdy322), which had been replying to several of Browning's tweets earlier this week, including making claims that he is a gay Black man. However, after reviewing social media accounts apparently tied to Purdy, it's unclear if Browning was involved.

Browning said his deleted tweet was merely him “quoting a message that I received earlier this week from a follower.” After that, Browning attached a video from the Dan Purdy account which shows a bald Black man claiming to be the man in question, who defended Browning, tweeting, “Not a bit. Not a sock puppet.” 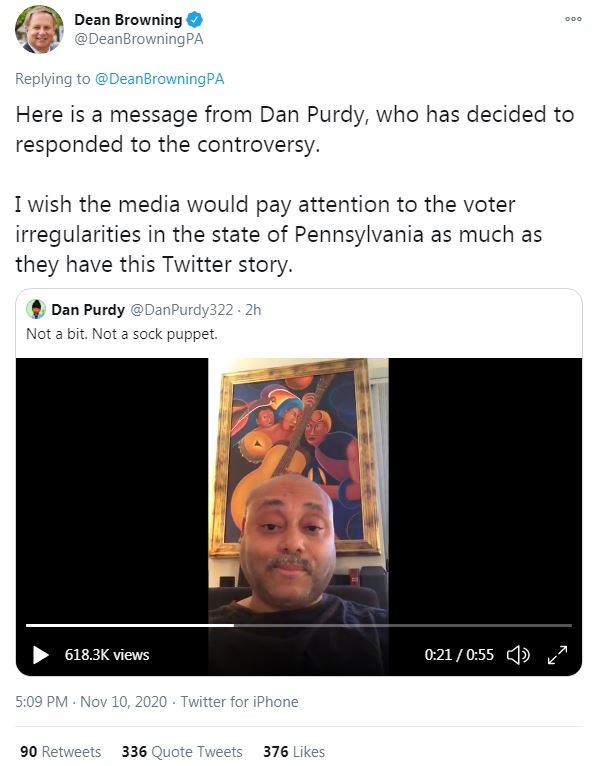 Screenshot taken from Twitter
Adding to the confusion, another Dan Purdy account (@soulcookie322) apparently used to be under a different name, White Goodman, where the user was claiming to be a white person in replies to other tweets and had a profile picture of a white man. Both Dan Purdy accounts have since been suspended on Twitter.


so from googling it would appear @deanbrowningpa's black guy identity "Dan Purdy" was also once used on the suspended account @soulcookie322. but before that account became Dan Purdy, it was a white guy named "Pat Riarchy" and "White Goodman". dean is really something else pic.twitter.com/gFkUPkNDPV

It’s unclear who exactly was running these accounts. But Google searches show an apparent match to the man in the video posted by the Dan Purdy account defending Browning as Byl Holte, aka William Holte. And a search of Holte’s Facebook page, which contains photo matches to the man in the video, appears to show he is related to Philadelphia legend and R&B superstar Patti LaBelle.

Holte's page has several photos posing with LaBelle. His profile says he lives in Philadelphia.

It’s unclear if or how Holte and Browning know each other.

City Paper will update this story if more develops.