A week after a particularly bad stretch of air pollution, Allegheny County Health Dept. announces plans for handling next one 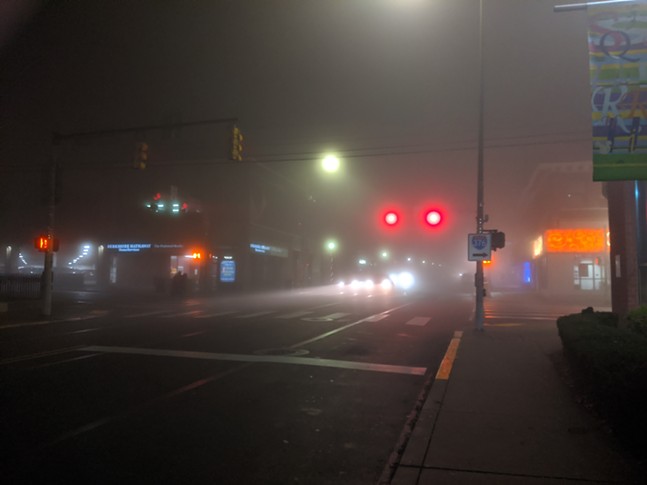 In a press release, the ACHD acknowledged that temperature inversions will increase in frequency and intensity with climate change. During an inversion, the behavior of the atmosphere reverses so that the air gets warmer with increased altitude and the cooler air remains on the surface. The warm air acts like a lid, trapping pollutants, like emissions from cars and power plants, which creates the smog.

ACHD announced three steps to regulate and improve air quality when future inversions occur. The first is to create emission regulations in 2020 “for industry operating in the county during weather-related pollution episodes.” No industry is mentioned by name, but this presumably includes Clairton Coke Works, which produces much of the pollutants in the area. The ACHD says the goal is to have a plan that can be put into place within 24 hours of a public health hazard announcement.

On Dec. 26, the ACHD posted a statement on its Facebook page that its monitors detected a higher-than-normal amount of pollutant particles in the area, and issued a Code Orange air quality warning on Dec. 24 and 25. (Smartphone users might also notice "unhealthy air quality warning" warnings on their weather apps.)

“ACHD recognizes that the increasing frequency of these temperature inversions is associated with climate change. We also recognize that industry isn’t the only contributor to poor air quality as things like vehicle exhaust have a significant impact upon pollution,” said interim ACHD director Ronald Sugar in the press release. “While we will continue to advocate for residents to do what they can to reduce emissions, we must also explore new regulations that would impose corrective action requirements on industry during short-term pollution events.These extended exceedances and higher pollution levels are a clear threat to the health of the county’s residents, but ACHD’s current regulations do not provide options to address this issue.”

The second improvement by ACHD will be to strengthen its meteorological forecasting to better predict — and announce to the public — when inversion events will occur. The third step is to work with local, state, and federal legislators to strengthen regulations, offering the proposed House Bill 1752, which would increase fines for facilities that surpass pollution thresholds.

The most infamous inversion event in Pennsylvania’s history was the 1948 Donora Smog, which lasted five days and was so dense and toxic that it killed 20 people and caused health problems for thousands of others. The Washington County incident is considered one of the worst pollution disasters in U.S. history, resulting from factory pollutants in the area. It’s cited as one of the events that led that to the creation and passage of the Clean Air Act of 1963.

What is a temperature inversion and how does it affect air quality?