A unique theatrical project blends the voices of women from the Hill District.

Among the six title performers in the The Women of the Hill stage show, only a couple of these current or former Hill District residents had met. But as they worked on the project, their sense of familiarity proved deeper than "hi" and "how are you."

"We connected when we all got together because we realized we were in the same block," says Brenda Tate. "We didn't know we knew each other."

Indeed, the bond forged through mutual family and friends -- through shared streets and the shared stories of an historic neighborhood -- is key to this project, running Nov. 20-22 at the August Wilson Center for African American Culture.

In Pittsburgh, they meant to both document and dramatize the Hill's legacy of strong women as symbolized by Ester. With help from the Wilson Center, churches, community groups, e-mails and word-of-mouth, Wilks and Chong found 50 applicants. Six were selected based on everything from age and variety of experience to, simply, how interesting their stories were.

The performers range in age from thirtysomething to 74-year-old Norma J. Thompson, who lived in the neighborhood for 35 years. The younger women include the group's only active professional performer, Kimberly Ellis, an academic and activist whose stage name is Dr. Goddess. (Ellis is also a niece of the late Wilson.)

Tate is a Pittsburgh Police detective who's lived all of her 60 years in the same few square blocks. Other performers include Phillis Daniel Lavelle, of the Lavelle Real Estate family (and mother of city councilor-elect Daniel Lavelle); Marlene Scott Ramsey, an office administrator and longtime community volunteer; and Charlene Foggie Barnett, a television-industry veteran whose father was Methodist bishop and civil-rights leader Charles Foggie.

Their stories cover the Hill's mid-century heyday as a national center for black culture; "urban renewal projects" that ripped the heart from the neighborhood; the 1968 riot that battered what remained; battles over a proposed casino; and hope for renewal.

"It's not just about facts," says Wilks. "We're really looking for their living history."

Chong and Wilks shaped the stories into a medley of voices, to be delivered onstage by the women themselves. "That overlapping is kind of the patchwork quilt of the Hill," says Barnett. The 90-minute show includes onstage projections of historic photographs, many from the performers' own family albums.

Chong says his Undesirable Elements series is meant to "[give] voice to communities that aren't heard so much."

Indeed, while Chong has staged shows in Pittsburgh before, he was surprised to learn that the Hill was once a hive of locally owned businesses and community parades. "This was a cohesive community and it disintegrated," he says. Part of the story, he says, is about "social justice" -- for instance, how the jobs that city officials so often promised failed to materialize.

But it's also personal stories, like Tate's about being a single mother struggling with alcoholism, and "how I overcame that to be who I am today," she says.

"They understood it was a celebration of their lives and the commitment of their families," he says. 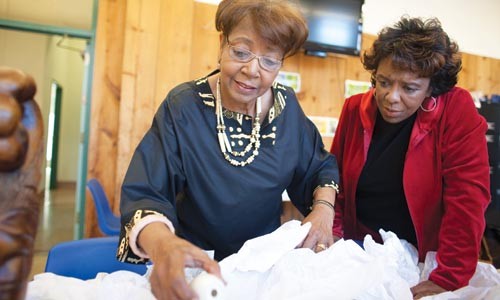