How well the patron enjoys John Riegert often has to do with how he or she interacts with John Riegert. 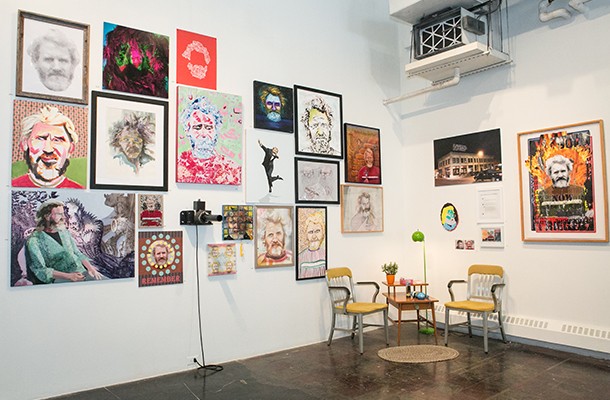 continues through Sept. 4. SPACE, 812 Liberty Ave., Downtown. 412-325-7723 or spacepittsburgh.org
At John Riegert, an exhibit at SPACE gallery, expect the unexpected. Conceived and curated by Brett Yasko, the show features work by about 250 local artists. A variety of media and styles convey the complexity of portraying a single subject: a guy named John Riegert. Riegert is also the exhibit’s full-time docent, seated comfortably among his portraits, ready and willing to answer a patron’s question with a story or friendly conversation.

A detailed four-page guide leads the viewer through each artwork, with brief descriptions of some artists’ processes. At first, this suggests a behind-the-scenes tour: gazing at a seemingly ordinary acrylic portrait on canvas, admiring the skill and the essence captured. But then you notice with a jolt that this particular artist, Judy Tulley, inspired the whole show. In 2013, Yasko saw Tulley give her grandson a painting that reminded him of Joseph Yoakum, whose work Yasko had seen in the Carnegie International. Yasko wondered why Tulley’s painting might be seen by only a dozen people, while thousands would view Yoakum’s work. He imagined asking many artists — known and unknown — to each create a portrait of the same subject.

Yasko’s first and only choice of subject was his old friend Riegert. John Riegert is a warm, fascinating person who loves to tell gallery visitors stories from his own life — and also from his adventures in creating this exhibit.

The artworks themselves range from works on canvas, installations, traditional sculptures and photography to videos, essays and even quilt mosaic. The viewer feels a bit like an archaeologist: Reading several artistic interpretations of Riegert’s self-published poem “I Never Built an Atom Bomb,” or listening to recordings of Riegert’s Facebook posts read aloud (by Jennifer Baron and Greg Langel), it’s like you’re digging through memorabilia of an ancient person. Except he is standing right beside you.

That alone is a head rush. Yasko’s numbered compilation almost tells a story; “Here’s a little bit about John. Oh, you think you know him? Now let’s turn that perception on its head.” When you hit portrait No. 85, and realize you’re headed into a dark room to watch video, it’s weird to realize you’ve barely scratched the surface. Other portraits range from Jack Pugilisi’s pointillist close-up and Eric Lidji’s 264,819-word essay to Dee Briggs’ salvaged steel I-beam. Considering the diversity of talent in SPACE, while hearing Riegert’s voice in the background, the viewer is struck by the overwhelming realization that no matter how hard an artist tries, he or she can never fit all of one person into a finite portrait. This epiphany is mitigated by Yasko’s permeating desire to bring the viewer closer to the art, and the art closer to the viewer. 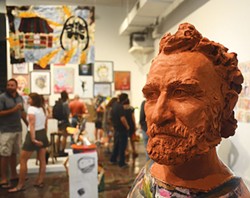 Including Riegert as a guide, however, is what actually completes the experience. Together, all of the artists, Yasko, and Riegert form an objective investigation on performativity. Riegert’s presence both comments on your mind’s perception of your experience in the gallery and almost serves as its own piece of art within, thereby incorporating you and your reaction into the exhibit. How well a patron enjoys John Riegert often reflects how she interacts with John Riegert.

The exhibition’s success first speaks to his approachability. The experience is surprisingly personal, usually making the unsuspecting, or perhaps more traditional, art patron a little self-conscious. Once introductions have been made, and Riegert breaks the ice with an anecdote about how a given piece was made, a patron can find herself, for example, candidly discussing mental illness — a topic well-represented in this exhibit — and how her own distressing human issues parallel his. Riegert’s discussion with me communicated the humbling notion that once Riegert became comfortable with himself in adulthood, he discovered that introversion and depression were not parts of a personality in stasis, but components of an illness. This perspective helped make sense of his willingness to talk so openly, and explained why all of the representations of him didn’t feel like an intrusion, or make him self-conscious in the least.

Galleries are usually a haven, where the shy can go and get lost in their own minds. Space allows you do to that, because what is there will speak differently to everyone. The various mediums and styles afford multiple entry-points. However, the participating artists all share the ability to excise extraneous detail. Combined with Riegert’s ability, or knack, for “staying attached to life” (as one piece in the exhibit puts it), the viewer is left with a new ability to witness the truth of the moment and the beauty in the everyday. The journey through John Riegert helps the viewer develop his or her own artist’s eye. Ultimately, viewers are taken deeper into themselves, constantly drawn into the present. It’s a powerful way to live. Just ask John Riegert.

The Long Run at SPACE