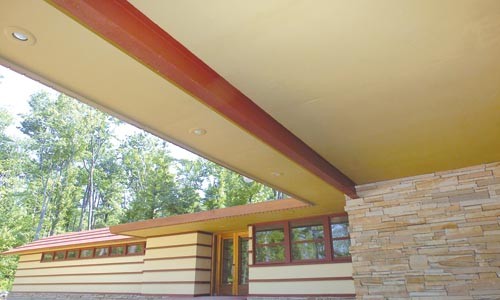 Duncan chic: A Frank Lloyd Wright carport. Photo courtesy of Polymath Park.
Help! I'm writing about Frank Lloyd Wright, and I just can't stop! Whether it's a house, a chair, a play, a book or an officially licensed set of Frank Lloyd Wright-inspired mah-jongg tiles, I simply can't resist the urge to weigh in whenever the artifact has something to do with that diminutive Unitarian from Wisconsin. And it's not just me. The profusion of these items in bookstores and catalogues acknowledges the mass market of us low-level Wrightniks, always looking for another glossy publication or geometric gewgaw to satisfy our obsession.

Among us though, there is a much rarer breed of obsessive devotee. How else could you explain the ambition of Greensburg-based builder Tom Papinchak? He bought Wright's Duncan House and moved it to a site in Mount Pleasant Township, deep in the woods, but not far from the Turnpike. It recently opened for tours, business meetings and overnight guests, at $385 per night. The 1957 structure, originally designed for prefabricated construction in larger numbers, was one of only a handful actually built. Its original location was in Lisle, Ill. But when rising land values led developers to threaten the house with demolition, it was put into boxes.

Papinchak's year-long campaign of painstaking reconstruction of a disassembled house was the primary effort of this enterprise. "More than the chance of a lifetime," he calls it. Also, other similarly motivated Wright devotees aided the process significantly. John Corson, who specializes in bank buildings and equipment, has visited hundreds of Frank Lloyd Wright structures over the decades. He alerted Papinchak to the availability of the Duncan House. The Frank Lloyd Wright Building Conservancy -- whose founding director in the late 1980s was former Western Pennsylvania Conservancy Executive Director Tom Schmidt -- worked to save the Duncan House from demolition, and executed the initial disassembly at its own expense.

Now the one-story house sits as if it had always occupied its current site. Its shallow hipped roof, horizontal board-and-batten construction and open carport are familiarly Wrightian. Likewise, inside, the living space opens generously with a characteristic cathedral ceiling and geometrically sculpted fireplace. The kitchen is larger than many in Wright houses, but the narrow corridor leading to the bedrooms is familiar. Commented one visitor with considerable understatement, "It's a nice '50s ranch house." Among a number of small detail changes, the large, noticeable alteration is the incorporation of a large conference room in the lower level, which is not visible from the entry but dominates the rear of the house.

It's easy to imagine that the house will be popular. It's within 30 miles of Fallingwater and Kentuck Knob, the former of which has more than 130,000 visitors per year. Fallingwater Executive Director Lynda Waggoner, who wryly welcomed the Duncan House as part of a "holy trinity" of Wright structures in the region, pointed out that over 70 percent of Fallingwater visitors stay overnight somewhere in Western Pennsylvania. Surely some percentage of these will want to stay overnight in a Wright-designed structure. Among some 350 remaining Wright structures, only two others are open for overnight visits.

Even better, as much as Wright's work is a magnet for attention, the Duncan House will also share the spotlight. It is part of Polymath Park, a 120-acre development originally planned by Peter Berndtson, who studied with Wright and built houses, mostly in Western Pennsylvania, in a similar style until he died in 1972. Berndtson built only two structures in this development, the Blum and Balter houses, but these are now also open to the public. The former is open for overnight guests and the latter is a visitors' center.

Someone in the crowd at the Duncan House opening whispered the heresy that they might even prefer the Berndtson houses to the Duncan House. Could such a thing be true? Berndtson never built an international landmark like Fallingwater, but he did outstanding work in a Wrightian idiom. Anyone who is interested in the Duncan House is bound to appreciate Berndtson's work as well.

The best kind of Wright obsession focuses not on his work exclusively, but also on any other variety of outstanding architecture.