The workshops involve posing questions about topics like rules, and comparing athletes to theatrical characters 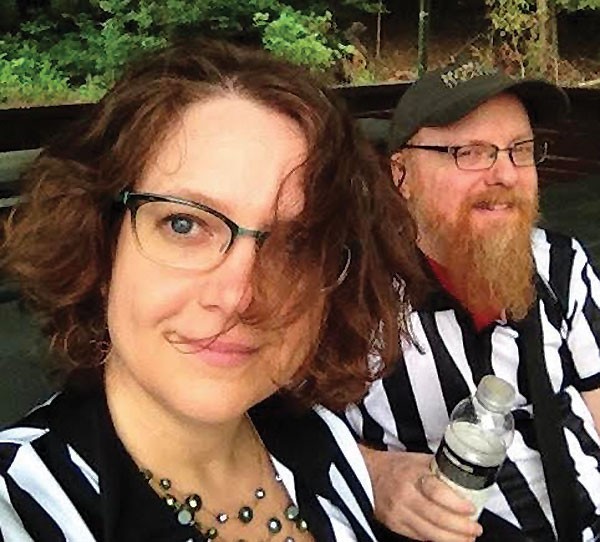 Four workshops have taken place since July. Rice calls them “a combination of devised theater, a neighborhood pick-up game and a lively discussion on our world.”

Rice and Thelin moved to Pittsburgh three years ago, and noticed how integral sports are to the community. Their work here has included the memorable immersive show (with Bricolage Productions) The Saints Tour — Braddock. Then they decided to try something both challenging and unfamiliar.
Their workshops involve posing questions about topics like rules, and comparing athletes to theatrical characters, to spark discussion about sports and life. Then come prompts and tests to explore the issues physically.

Objects are also involved. Rice says the items chosen for possible use are “the weirdest stuff we can find just to move [the new sport] out of the traditional sports vocabulary.” A small potted cactus remains the oddest piece yet to be incorporated.

The sports spawned are often collaborative rather than competitive, and sometimes strange. For instance, the painstaking game Tree Egging involves transporting an egg safely to a spot in a tree using only tennis rackets.

A more competitive sport conceived by attendees is Heart Attack, a variation on tag in which teams must join the separate pieces of a plastic heart. An opponent’s pieces can be retrieved only if, on contact, you are the one with the lowest heart rate (as gauged with a finger on the wrist).

Next year, Real/Time plans more workshops. By 2018, once the new sport takes shape, Rice and Thelin aspire to a full season: a draft, spring training, and a series of games and shows in the summer followed by a championship, all with competing or cooperating neighborhoods.

“We really are hoping that the neighborhoods themselves will become proud of their contribution to what we’re trying to build,” Thelin says.

The next workshop is from noon-4 p.m. on Sun., Dec. 4, at Braddock’s Nyia Page Community Center. “I think the December 4th workshop will definitely be the closest to linking ideas of theater and sports as far as what we’ve done so far,” Thelin says. To attend, whether for the full four hours or some portion thereof, RSVP at realtimeinterventions@gmail.com.

A one-woman show about opting out of motherhood