It's a pretty bold move, putting "Dahntahn" in neon, as this restaurant has done with its street sign. We could get into a whole disquisition on how the use of Pittsburghese has changed over the past dozen years, from class marker to mark of authenticity, even as the accent itself becomes thinner on the ground. Or we could just cut to the chase and say that there's nothing déclassé about A Taste of Dahntahn.

The restaurant is located in a former National City Bank branch on Liberty Avenue. The building has been restored by its owners, Bob Crawfod and Courtney Lynch-Crawford, to full Victorian splendor — at least, on its exterior. Inside, there's nothing 19th-century prim-and-proper about Taste of Dahntahn: Its bar and two dining rooms are a little bit 20th-century retro, a little bit modern and just kitschy enough that you know you're supposed to have fun. 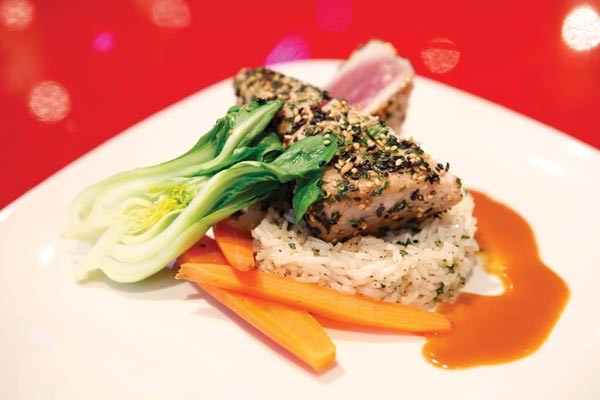 The LED-lit tablet menu offers more Pittsburghese — sammitches for lunch, tuhmaytuhs for dinner. But like the restaurant's decor, the ingredients and preparations belie the homey vernacular. The fried green tuhmaytuh, for instance, is Parmesan- and panko-crusted and topped with whipped cream cheese. Neither the deconstructed lasagna nor the tofu stir-fry are likely to make your baba recall the family meals of her youth. There's a bar menu that appears more Pittsburgh-by-the-numbers, with pizza, burgers and wings. (But even these items appeared to be a notch above tavern fare: When we saw a thin pizza with puffy bubbles of crust on its way from kitchen to bar, we debated switching seats.)

And, most astonishingly of all, not a single menu item at Taste of Dahntahn is sports-themed. Instead of black-and-gold burgers, we found Earth, Wind, and Water Sliders (made from sirloin, chicken and battered haddock).

Our reaction to our appetizers was mixed. Angelique liked the house-battered calamari, which were tender beneath their extra-crispy coating and dusted with fresh-grated pecorino Romano, but Jason found them too salty and bemoaned the lack of rings. We both found the crabcake adequate at best, fishy and too heavily breaded, and served on a bed of lettuce that was unaccountably undressed. This pile of naked greens needed a bright, acidic dressing to provide crisp contrast to the hearty cake. A remoulade accompanying the crabcake, and one of three sauces that came with the calamari, tasted inexplicably of anchovies, not a flavor that we mind, but one that doubled down on seafood — and saltiness — rather than offering any contrast. A bowl of chicken-noodle soup was just that.

But everything turned around when the big plates arrived. What we hadn't anticipated when reading the menu was how much creativity the kitchen applies to familiar dishes. The description of the London-broil meatloaf, for example, brags about the combination of ground beef, flank steak and pork. But the combination's distinctive flavor profile, an umami-rich taste that bears little resemblance to anything typically labeled meatloaf, has to be experienced to be appreciated. And appreciate it we did: It really was, as the menu promised, "the next level."

Similarly, Tillamook cheddar-spinach ravioli doesn't sound exactly like the old country, but the accompanying pine nuts, roasted red peppers and marsala sauce suggested familiar Italian territory. Instead, the ingredients combined to create a distinct, savory flavor: nutty, sweet and rich. Optional sliced chicken breast added substance, but the interplay of the other ingredients was so complex that the vegetarian version of this dish would be just as satisfying.

Shrimp-crowned sole also departed from expectations. Sole is a challenging fish, so thin and delicate as to threaten falling apart, drying out or both. But Dahntahn's kitchen handled it admirably. Most impressively, the mild fish held its own over a bed of truffled mashed potatoes topped with sautéed vegetables, with caper butter subtly seasoning the whole dish. Two plump shrimp reinforced the seafood flavor without distracting from the delicate fish.

Our best dish of the night was one we almost didn't order: feta-stuffed Piedmontese peppers. This brilliantly realized dish used both sweet yellow and more bitter green bell peppers. But when stuffed with briny, tangy feta and studded with juicy, astringent grape tomatoes, the peppers' pleasantly vegetal flavors came to the fore. A whole-grain mustard sauce worked amazingly well, bold enough to make itself known without causing spice or burn. A Yukon potato cake provided starchy, but not too heavy, ballast.

A Taste of Dahntahn needs to be bold if it's going to carve out a niche in the culinary desert between the restaurant havens of Market Square and the Cultural District. Fortunately for natives and visitors alike, A Taste of Dahntahn seems to have the right stuff: a distinctive atmosphere that is both sophisticated and fun-loving, and a creative kitchen capable of reimagining simple, even elemental, dishes without resorting to showy applications of technique or technology.