A story in partnership with PublicSource: The long fight for redevelopment in Larimer | News | Pittsburgh | Pittsburgh City Paper

A story in partnership with PublicSource: The long fight for redevelopment in Larimer 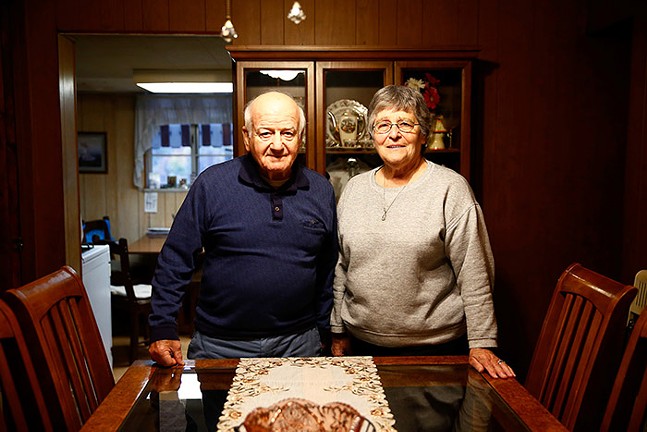 CP photo: Jared Wickerham
Joe and Dolores Marinello pose for a portrait in their dining room inside their Larimer home.

Joseph Marinello is the last of his family left in Larimer. Now 90, he’s lived his whole life there, and he and his wife Dolores live in the home where he grew up with his two sisters.

Over the decades, the couple has seen blight come to the neighborhood, businesses close down and families continue to move away, including members of what was once a robust Italian community. They watched Larimer gain a reputation of being run down, and its residents felt shunned by others in Pittsburgh.

But much has changed in recent years ...

As part of an ongoing partnership, Pittsburgh City Paper has teamed up with PublicSource, Pittsburgh's nonprofit digital-first news organization, in bringing our readers more local news stories. You can read the rest of this week's story by Remy Davison in our print issue on stands this week, or online here: "We deserve it": Larimer residents reflect on the neighborhood's history and the long fight for redevelopment.

Addendum: While on assignment for this story, photographer Jared Wickerham met Dena Young-Rivers and her husband Ron Rivers on Fri., Nov. 8, the day their new store R-and-D Market was holding a grand opening.

“The community has been very welcoming and saying that they need a store like ours,” says Young-Rivers who adds they already know about 20 customers by name.

The pair, who live with their 19-year-old daughter in West Mifflin, isn’t from Larimer themselves but Young-Rivers says her aunt lived on Paulson Avenue for over 40 years. “I used to visit often growing up, up until she was placed in a high rise,” she says.

Young-Rivers says they hope to sell cold sandwiches in the future, and will soon be giving away kids’ coats and free clothes in the store for those in need.