It was a rainy Tuesday afternoon in December, so close to the holiday break that coaxing a productive discussion out of students would be a herculean task.

There’s the old cliché of teachers showing a movie to fill gaps like this, but the film screening planned for this day would be different.

On Dec. 17, more than 100 students from area middle schools traveled to SouthSide Works Cinema to see Run Boy Run, a film that follows an 8-year-old named Srulik, a Jewish boy orphaned after fleeing Warsaw during Nazi-occupied Poland in 1942. Yes, the students get to socialize and indulge in soda, popcorn, and candy. But they also exercise their minds, with the film provoking questions and commentary from the students. 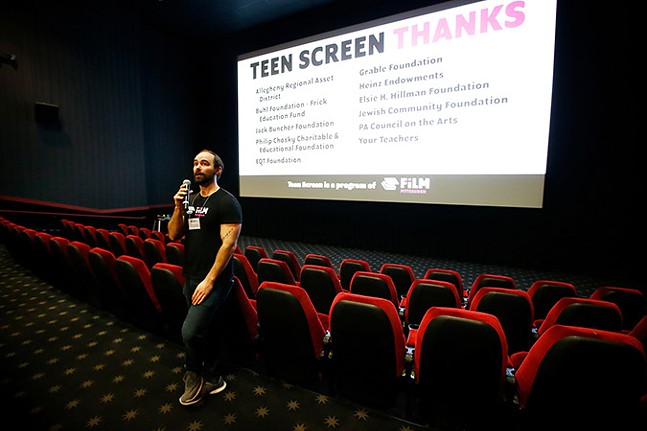 CP photo: Jared Wickerham
Educator Drew Checkelsky talks to the students before a screening at the SouthSide Works Cinema as part of Teen Screen.

“I think it’s important for teenagers to know not just about what the Holocaust was, but for them to know about people’s individual stories. That way, the information in history books becomes more real and sticks with you,” says one student from John F. Kennedy Catholic School after a screening of the movie on a different day.

Another student, inspired by the film, dreamt of how they could share such an experience with others in the future: “I could start an organization that one day could benefit and sponsor one of these movies to be shown to other kids my age and give them the privilege to also open up their eyes to history.”

Those kinds of revelations are exactly what Teen Screen is all about.

As part of an ongoing partnership, Pittsburgh City Paper has teamed up with PublicSource, Pittsburgh's nonprofit digital-first news organization, in bringing our readers more local news stories. You can read the rest of this week's story by Jourdan Hicks, with additional reporting by CP's Amanda Waltz, in our print issue on stands this week, or here: How a program showing movies to teens aims to help them find their inner "changemaker."