“We see more TVs every year.”

Ned Eldridge launched his electronics-recycling company, eLoop, in 2008. In 2013, a Pennsylvania law took effect prohibiting the landfilling of electronic waste, like TVs and computers: no more putting them out with the trash. But if you think that a law promising a practically endless stream of free raw materials was a complete win for companies like eLoop, think again.

Americans produce about 3.4 million tons of electronic waste annually, according to a 2012 U.S. EPA estimate, and much of it — computers, mobile devices — can be profitably recycled. But while most of that waste still doesn’t actually get recycled, there’s an especially big problem with cathode-ray-tube TVs and monitors — basically, the old, pre-flat-screen kind. Each CRT unit contains up to 8 pounds of lead in the tube. And with hardly anybody making new CRTs, low demand means it costs companies like eLoop more to recycle CRTs than they can recoup.

Pennsylvania’s Covered Device Recycling Act was created to keep toxins like lead, mercury, cadmium and arsenic out of landfills. The law insists that recycling be free and seeks to cover costs by requiring payment from electronics manufacturers, like Sony and Panasonic. But the price that manufacturers are willing to pay doesn’t sufficiently subsidize recycling CRTs here. Each year, manufacturers must pay to recycle the weight of electronics they made two years earlier. But the weight of electronics collected has been exceeding that, according to the state Department of Environmental Protection.

Eldridge says eLoop processes 850,000 pounds monthly at its facilities in Plum and State College. Workers disassemble units by hand, shipping CRTs to out-of-state processors. (End-users include lead smelters and ceramics manufacturers.) While 80 percent by weight of that total waste is CRTs, the current subsidy of 10 cents a pound covers only about 65 percent of the CRTs’ recycling cost. “It’s ridiculous,” says Eldridge. eLoop also fixes used equipment for resale, fulfills contracts to destroy corporate data, and resells salvaged commodities like copper and aluminum, but the CRT problem is “unsustainable,” says Eldridge. Worse, while state-permitted recyclers like eLoop must accept CRTs, some nonpermitted recyclers charge to take CRTs while cherrypicking more lucrative items.

CRT disposal is “a problem nationwide,” says Barbara Kyle, of the Oakland, Calif.-based Electronics TakeBack Coalition. (Cheap but irresponsible overseas disposal of electronics is a problem worldwide for workers and the environment.) EPA says some U.S. recyclers are simply stockpiling CRTs until a better market develops. Twenty-six states have laws barring electronics from landfills. But though residents can no longer simply trash their old TVs, the remaining options — locally, Best Buy accepts TVs with screens under 32 inches — are often not terribly convenient. That means consumers are stockpiling CRTs, too. In 2008, the EPA estimated that Americans had 100 million old TVs stashed at home, and that was before LCD models completely took over the market.

Yet even the small percentage of people attempting to recycle their CRTs are overwhelming groups like the Pennsylvania Resources Council. Each year, the PRC holds six collections for hard-to-recycle items in different sites around the region. The events regularly must shut down early because of all the TVs. This year, the PRC collected half a million pounds of electronics, says PRC Western Regional Director Justin Stockdale. “We see more TVs every year,” he says. Yet, he adds, “We’re not even making a dent in the total volume that’s out there.

A better state law would help. Connecticut, for instance, basically allows recyclers, rather than manufacturers, to set the price; Mark Latham, an analyst with that state’s Department of Energy & Environmental Protection, says recyclers in Connecticut get about 30 cents a pound for electronics, three times the rate here.

Recyclers like Eldridge, and their trade group, are advocating for such a change. And the PRC is working with Allegheny County to set up a permanent collection site, to bring down costs.

Meanwhile, Americans just keep buying more electronics — a few hundred million units a year. And these short-lived but high-value devices have a recycling rate of only about 30 percent nationally, says the EPA. The rate for TVs is even lower — yet another unforeseen complication of our taste for home entertainment. 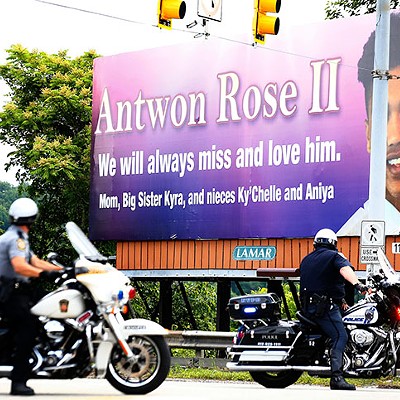