There was a time when I showed horses competitively, both as a 4-H kid and in rodeos. While I left that life — partly because of allergies, partly because avowed horse people are insufferable – I still feel drawn to equine art. As 30 Rock character Jack Donaghy once declared, "We know what art is! It's paintings of horses!" To some degree, I am part of that “we.”

This holds true for A Sporting Vision, the latest exhibition at the Frick Pittsburgh. On view through Sept. 8, the collection spans 200 years of oil paintings depicting the intimate relationship between humans and horses in pre-automated England. It also illustrates how growing industrialization and other factors changed that relationship, as horses went from pulling carriages and chasing foxes to carrying jockeys to the finish line.

To drive this home, the exhibit is separated into three key themes: the hunting of “In Pursuit,” the horse racing and coach driving of “In Motion,” and the provincial scenes of “Animal, Man, Country.”

Taken from the private collection of the late Paul Mellon, and organized by the Virginia Museum of Fine Art, the show focuses mainly on horses, as well as other animals familiar to hunting and farm life, including hounds, cows, and pigs (there’s also some wildlife thrown in for good measure). Even so, the Frick’s chief curator and director of collections, Sarah Hall, believes the show’s appeal extends beyond dog and pony people, as the romantic scenes of English life would please any Anglophile taken with Jane Austen, Emily Brontë, or Downton Abbey. 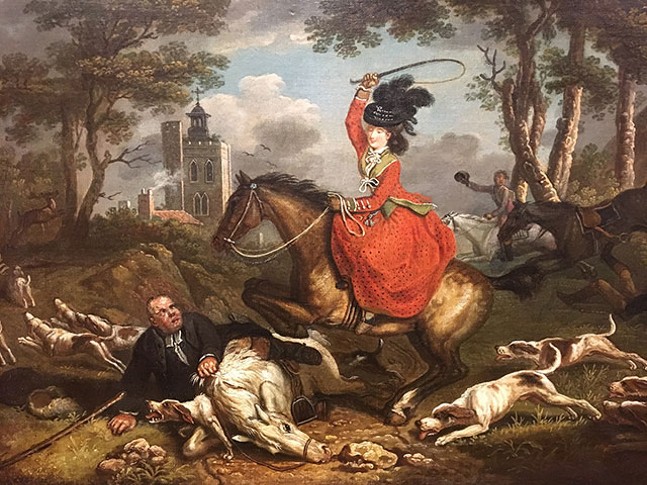 CP Photo: Amanda Waltz
The Joy of the Chase or The Rising Woman and the Falling Man, 1780. John Collet

To that end, A Sporting Vision evokes complicated feelings, as most of the pieces are limited to showing the exploits of wealthy gentry from the 18th and 19th centuries. There’s also the animal rights factor, as fox hunting remains a major theme throughout (it’s worth mentioning that people still fox hunt in the U.K., despite it being banned). Both themes are especially prominent in Sir Mark Masterman Sykes's Hounds with Huntsmen by Henry Bernard Chalon and The Death of the Fox by John Nost Sartorius. In the former, a hired man, shovel in hand, stands in the foreground with his working dog and horse, the background a flurry of well-bred hounds and fox hunters giving chase. In the latter, a hunter, surrounded by his excited hounds, triumphantly hoists a dead fox above his head.

Even horse racing and steeplechase, both of which appear here, still generate controversy for animal cruelty, as horses have either died or suffered severe injuries as a result of racing.

Still, while examining each painting, it’s amusing to realize that interests now synonymous with so-called “horse girls” was once a key part of upper-class performative masculinity. While women rarely appear in the show, there are a few exceptions, most notably in The Joy of the Chase, or The Rising Woman and the Falling Man. The painting by John Collet shows a stylish woman in the midst of a stag hunt, smiling smartly at a fallen male rider as she urges her mount to jump over him. 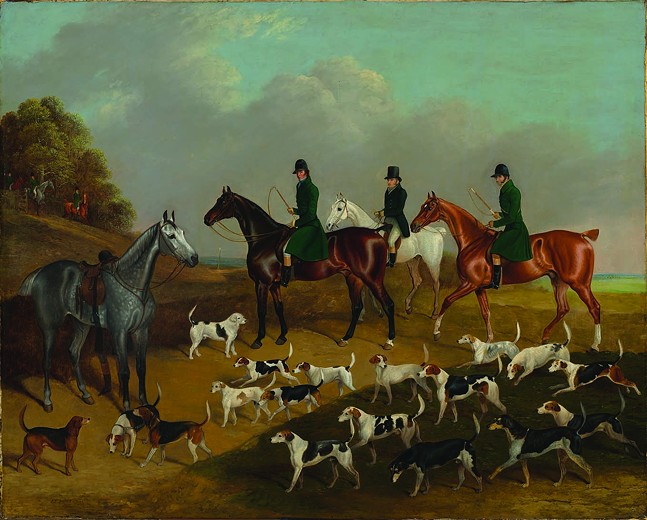 Even so, it’s difficult to deny the level of skill in each piece. This especially applies to featured artist George Stubbs, whose obsession with studying and painting horses would put even the most hardcore horse girl to shame (he literally wrote the book on horse anatomy in 1766). His attention to detail regarding the equine physiognomy is on full display in six paintings, all with impressive, nearly photographic renderings of large, expressive eyes, mouths chomping at bits, and musculature highlighted by sleek, shiny coats.

The anatomically correct paintings of Stubbs and others aren’t the only style represented. Some works are less concerned with accuracy, bordering on cartoonish folk art (The Final Lengths of the Race for the Doncaster Gold Cup by John Frederick Herring, Sr. brought to mind the 2003 French animated feature The Triplets of Belleville).

Whatever impression A Sporting Vision leaves with the viewer, the various works, with their often lively scenes and naturalist details, contribute to a vivid narrative about a bygone time during which horses played an essential role.