The Coen brothers come closer than ever to playing God in this dark comedy about the Meaning of It All. 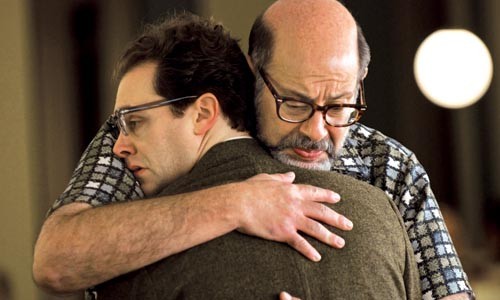 Michael Stuhlbarg (left) and Fred Melamed hug it out.

The philosophical question at the center of A Serious Man is not what G-d has in store for its characters, who are all educated, middle-class Jews living in Minnesota, c. late 1960s. It's really what their almighty creators, J-el and Ethan C-en, have in mind to do with them.

The C-ens have always enjoyed the freedom to abuse their characters. In fact, words like "contempt" come to mind. (Yes, I know, that's one word. But it speaks volumes.) They began their oeuvre with Blood Simple, in which the only admirable person among a bunch of larcenous Texas hicks is a cool black guy from Detroit (where he returns when the rednecks begin to kill each other). They won an Oscar a few years ago for No Country for Old Men, one of the cruelest movies of the millennium (with apologies to fans of Saw VI).

Now they've turned their gaze inward and backward to their Jewish Midwestern boyhood. And while A Serious Man is certainly a work of fiction, it's also their most intimate film, and their most moving (although bear with me on this point). They work with nobody from their stock company, and just as The Sopranos managed to hire every Italian-American character actor in the business, the C-ens seem to have found every Jewish-American one.

They direct these actors almost as if they're animated: Every gesture, every silence, every roll of the eyes and hacking up of phlegm feels like something from a storyboard. It's absorbing to watch, in part because the actors are so obedient, but also because, as Fitzgerald said (and I'm paraphrasing), a character will emerge only if you begin with a cliché.

A Serious Man tells the story of Larry Gopnik (Michael Stuhlbarg), a physics professor who's as close to a decision on his tenure as he is far from understanding the meaning of life. He has a high-strung daughter who does nothing but wash her hair (there are several steps involved, apparently), and a low-keyed son who's memorizing (from a vinyl recording) the Hebrew necessary to stage his bar mitzvah, and who drifts off in Hebrew school by listening to Grace Slick sing "Somebody to Love" through the earplugs of his transistor radio.

Larry's wife (Sari Lennick), whose every sentence is dire, and whose lips thrust forward when she speaks, has fallen in love with the hirsute (albeit bald) Sy Ableman (Fred Melamed), a friend of 15 years, and a widower of three. So now she wants a get -- a ritual Jewish divorce that will allow her to remarry. Larry's jobless brother, Arthur (Richard Kind), plagued with a sebaceous cyst on his neck, sleeps on their couch, wins at gambling using a mathematical formula he devised, and gets arrested for soliciting a prostitute. Their neighbor on one side is a Gentile who plays catch with his son as Larry looks on in wonder. The lascivious middle-aged woman on the other side is Jewish, smokes marijuana, sunbathes nude and has apparently seen The Graduate.

Larry's search for answers takes him to a series of rabbis: one too young to know anything; one who tells a great story about a dentist who found Hebrew letters engraved on the teeth of a goyim patient; and one, very old, and with a white beard, who does nothing but sit and think all day.

So what does Hashem want of us, dammit? What does he want of Larry? As Larry stands in front of a chalkboard filled with dizzying equations, he tells his class, "Even though you can't figure anything out, you will be responsible for it on the midterm." After the story about the dentist, the rabbi sums up: "A sign from G-d? Don't know. Helping others? Can't hurt." This is at once simple, simplistic and true enough. It's also the end of every South Park episode, where the music wells up and lessons are learned, and we know Trey Parker is putting us on.

A Serious Man is a fable, like O Brother, Where Art Thou?, and its tone is otherworldly, like Barton Fink. The C-ens have mocked many other American subcultures in the past, so now it's the Jews' turn. But their movie is equally akin to Todd Haynes' Far From Heaven, which did for '50s suburban anxieties what A Serious Man does for their '70s counterpart. The characters in this movie don't have to be Jewish. The fact that they are only adds an additional layer of angst and gives the C-ens more room to play with them.

It's often funny, just as often overstated, highly contrived, and really, in the long run, not terribly profound. The C-ens' work usually distills to a few simple ideas: You're on your own (i.e., there is no G-d), and people are fools, especially when they try to figure things out, whether it be themselves or others. A Serious Man opens with a set piece, spoken in Yiddish, that may be the best sequence in the brothers' canon: Set in the Old Country, it's an eerie parable about a wily dybbuk (Fyvush Finkel) and the fearless woman he can't fool. Naturally, it involves something sharp and fatal.

How do you end a story like this? How do stories like this end? Well, how do all things end? The C-ens have no mercy, but this time they outdo themselves, and it's hilarious, in a thoroughly horrifying sort of way. The final few minutes of A Serious Man are the equivalent of sitting down beside a homeless person, passing the time of day with him, and then eating a roast-beef sandwich without offering him a bite. Y-u might as well just push him in front of a bus. Instead, Y-u leave that job to someone else, which of course makes Y-u a better person. But what does it say about the Executi-ner?