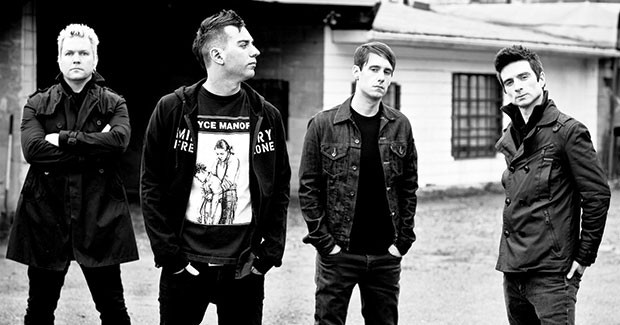 Anti-Flag and its latest, American Fall

There are very few positives to take away from the year since Donald Trump was elected president, but it has made for a lot of music celebrating defiance.

Anti-Flag has always been a band that prioritizes the political, crafting catchy punk music that rallies the opposition to oppression and bigotry. “When the Wall Falls,” off its latest, American Fall, is just one of 11 songs that urge resistance. “When the Wall Falls” is a reminder that not one American is free as long as anyone is oppressed: “If they come for you in the night, they will come for me in the morning.”

Keith Morris, “What Happened to Your Party?”
Charlottesville, Va.
Known to at least one of his fellow musicians as “our rockin’ protest grouch in chief,” Keith Morris has a slew of protest songs, such as “Psychopaths & Sycophants,” “Prejudiced & Blind” and “Brownsville Market,” from his Dirty Gospel album, plus “Blind Man,” “Peaceful When You Sleep” and “Border Town,” from Love Wounds & Mars. His latest release is “What Happened to Your Party?"

Dooley, Lor Roger and TLow, “CIT4DT”
Baltimore, Md.
This Boosie-tinged Thee Donald diss from Baltimore that dropped long before inauguration still thrills: “Boy ain’t even white, you yellow / You said you’d date your own daughter you a sicko.” Stakes are high here, too. The mastermind behind it, Dooley, is Muslim, for example. And right-wing, semi-fascist snowflakes who took the song totally seriously denounced it as a “death threat” — “CIT4DT” stands for “chopper in the trunk for Donald Trump.” They bemoaned its Baltimore origins, where protest morphed into property damage, and as far as a lot of us were concerned, verged gloriously on revolution. Meanwhile, the trio responsible for it thought the shit was hilarious.

Trombone Shorty and Dumpstaphunk teamed up on a song called “Justice,” which they released on the day Donald Trump was inaugurated. A mélange of funk, jazz and New Orleans brass-band sounds, the video for “Justice” slyly marries footage of Trump against pointed lyrics. “Inauguration day seemed to be an appropriate time to voice the need for equal say and opportunity for all people,” said Dumpstaphunk’s Ivan Neville. “We entered a new year with a lot of unanswered questions on the subject of ‘justice,’ that we all felt a little uneasy about. But there’s only so much we can do, and this track is our way of expressing our worries.” The song is available on most streaming services.

Mal Jones, J. Blacco, Lost Firstborne, and DJ Shotgun
CODE RED “Hands Up, Don’t Shoot"
Jacksonville, Fla.
Mal Jones said, “We came up with this song after all of the recent acquittals in the cases related to the steadily rising murders of unarmed black men in the hands of law enforcement in America. We wanted to protest about this issue in the most effective way we know how. Through song. Hands up, don’t shoot!”

“My inspiration for writing my verse was first, the climate of events going on at the time. It was right after the Alton Sterling situation. When my man Lost Firstborne played the beat, that’s just what the track was speaking to me. It had a haunting, soulful vibe about it, so once I heard it everything flowed rather easily,” added Blacco.

Shortly after Inauguration day, two Athens studios invited 19 local bands to commemorate the dawn of the Trump Age, tracking 20 songs in a marathon 48-hour session. While much of the resulting album, Athens Vs. Trump Comp 2017, is suitably bleak, ascendant emcee Lingua Franca’s “A Man’s World” stands out for its sheer defiance. “Frenzied and indiscreet,” it’s a fiery feminist anthem for the resistance.

OG Swaggerdick, “Fuck Donald Trump”
Boston, Mass.
Among diehard hip-hop heads as well as artists, Boston’s underground rap scene is renowned as one of the most lyrically elaborate and intellectual anywhere. To that end, over the past year, such acts as STL GLD (Moe Pope + The Arcitype) and, more recently, The Perceptionists (Mr. Lif + Akrobatik) have released their most compelling works to date, largely inspired by the mess that Donald Trump has made (though not always name-checking Dolt 45 directly). But when it comes to straight-up protesting and verbally impaling the potty-mouthed POTUS, there’s something undeniably satisfying, even admirable about the Hub’s own OG Swaggerdick’s simple and straightforward election anthem, “Fuck Donald Trump.” From the fittingly filthy rhymes — “never give props to a punk-ass trick / motherfuck Donald Trump he can suck my dick” — to the strangers on the street who gladly join along in rapping in the video, these are protest lyrics that you’ll still be able to remember, and perhaps even rap for relief on occasions when the president leaves you otherwise speechless.
— Chris Faraone, DigBoston

Featuring over a dozen guest contributors, including poets, rappers and jazz musicians, Nappy Head weaves a phantasmagoric assemblage of words and sounds into a razor-sharp critique of racial oppression in modern America. “I wanted to symbolize the state of oppression that Black people experience every day. From not getting fair treatment in the justice system, to getting shot and killed by law enforcement, to being unfairly treated in the workforce — you name it. I wanted to make a statement on how we as Black people view this oppressive society that we live in. I also wanted to give a different perspective from white people. I have a couple of my friends, who are white, on the album speaking about the nature of white privilege,” Breeze says. “Blood Splatter” is the record’s most cutting track, featuring spoken-word artist Too Black, with cascading cymbal cracks and careening sax.
— Kyle Long and Katherine Coplen, NUVO News

The After Lashes, “We the Sheeple”

The After Lashes is a new all-female punk band from the Coachella Valley that features Ali Saenz, the wife of former Dwarves and Excel drummer Greg Saenz. Frontwoman Esther Sanchez explained the inspiration behind the band’s song, “We the Sheeple.”

“‘We the Sheeple’ was an easy song to write, because it came from a place of frustration and growing resentment toward the current powers that be, and, of course, more specifically, Donald Trump,” she said. “We have a president who calls anything he doesn’t like ‘fake news,’ while simultaneously spending an insane amount of time tweeting nonsense and lies like a crazy person.

“The policies he intends to establish are harmful to pretty much everyone who is not wealthy. Unfortunately, so many who voted for him were unknowingly voting against their own best interests. The song is very much about uniting against a tyrant, because that is precisely what we believe Trump to be.” — Brian Blueskye, Coachella Valley Independent

There’s been no shortage of scathing political-protest songs coming out of D.C. since, well, the birth of punk. But in recent years, post-punk quartet Priests have succeeded in reminding the rest of the country that D.C. is, and always has been, pissed the fuck off. “Right Wing,” off the band’s breakthrough EP, Bodies and Control and Money and Power, so perfectly captures the ass-backwardsness of living in a country controlled by capitalists, fascists, racists and war-mongers. “Everything everything / So right wing / Everything everything / So right wing / Purse searches, pep rallies / Purse searches, SUVs,” sings Katie Alice Greer. It reads like a short, poetic treatise on how the toxicity of right-wing ideals infects everyday life. — Matt Cohen, Washington City Paper

Withdraw, “Disgust”
Columbia, S.C.
On its 2017 debut EP, Home, Columbia’s Withdraw oscillate violently between bristling, pedal-to-the floor emo (think At the Drive-In) and brutal, clawing crust punk. And on “Disgust,” the band proves the virtue of its versatility, shifting from an unflinchingly blackened hardcore blitz that bashes sexual abusers to a more expansive, anthemic coda that seeks to lift up the victims — “You are not tarnished!” It’s a potent statement, a searing declaration of allyship in a musical realm more often derided for problematic gender politics. — Jordan Lawrence, Free Times

NODON, “Alt-Wrong”
Burlington, Vt.
NODON are an anti-fascist, anti-hate power-punk duo born out of the 2016 presidential election. Seething with caustic epithets, the songs condemn xenophobia, sexism, homophobia, white supremacy and, above all, President Donald Trump. “Alt-Wrong,” from the 2017 EP, Covfefe, delivers a swift and vicious kick to the alt-right’s figurative crotch. Over razor-sharp guitar riffs and seething drums, they scream their battle cry: “Annihilate this hate! Not right! Alt-wrong!” — Jordan Adams, Seven Days

Rmllw2llz “So Amerikkkan”
Louisville, Ky.
When you think of the Louisville music scene, your mind probably bounces to My Morning Jacket, Bonnie “Prince” Billy or maybe even White Reaper — all who are great. But the city’s hip-hop scene is packed with poignant hip-hop artists, and if you’re looking for a pure protest song, look no further than Rmllw2llz’s “So Amerikkkan,” where he says “Fuck Trump, he’s a bum and Hillary trash, too.” The song was released a few months ago, but, if you give it a listen, you can hear a lot of the country’s past, present and future angst packed into a few powerful minutes. — Scott Recker, Leo Weekly