A Robert Qualters retrospective is a summation, and a valediction, for a local icon. | Features | Pittsburgh | Pittsburgh City Paper

A Robert Qualters retrospective is a summation, and a valediction, for a local icon.

Qualters' paintings are amazingly big-hearted; poignant; and, at times, weirder than most things out there.

Robert Qualters was born in 1934 and grew up in Clairton. Drawn to painting, he studied at Carnegie Tech, then spent time in the Army, in Europe, before attending art school in California during the Beat era. In 1968, he returned to Pittsburgh and kept painting; in the 1980s, he became a local icon with his vibrant images of neighborhoods and landmarks, often annotated with his own quirky texts.

Today, Qualters is venerable, an institution. On March 13, the Pittsburgh Center for the Arts (which named him its Artist of the Year in 1985) marks his 80th birthday with a launch party for Vicky Clark's book Robert Qualters: Autobiographical Mythologies. The event coincides with Robert Qualters: A Life, the PCA's big, Clark-curated retrospective.

The exhibit, which includes 68 works, shows why Qualters' painting is easy to like. His work, heavily influenced by the Bay Area Figurative School, employs abstraction but is basically representational, and it is marvelously, sometimes even flagrantly, colored. Never intimidatingly austere like so much contemporary art, yet without the archness of Pop, the paintings are as busy as an errand-filled Saturday, cozily cluttered not just with text but with everything: people, houses, birds, billboards, weather, leaves, squiggles. Despite his formal training, Qualters displays some of the accessible effervescence of an outsider artist like Howard Finster. On one self-portrait in the exhibit, Qualters self-effacingly writes that his mission is to "Jam every inch of the surface with gross and vulgar images."

Qualters is especially easy for Pittsburghers to like: His paintings almost invariably depict this region, past or present. His fame in the 1980s arrived as he was most prolifically memorializing dead steel mills and beloved sites like the City-County Building and Kennywood; the latter alone is the subject of three large-scale paintings in this show. His paintings exploring his memories of vanished landmarks like Jenkins Arcade and Forbes Field second the local fetish for things-that-aren't-there-anymore. And those companionable, on-canvas texts were a memorable calling card: "So long, Mosse Electrolysis Hair Removal Clinic," he painted on 1982's "Jenkin's Arcade." "Farewell, Mr. Tooth."

But while paintings like these might feed our nostalgia, that's not all they do. For one thing, they're beautiful: Qualters' use of color is striking, typically joyful, reminiscent of acknowledged influences like Bonnard and Matisse. Few painters have captured the city's light so well, the moods of its rain and snow. A signature piece like "Hazelwood — Second Avenue" (1984), suffused with orange and blue, is a somberly lovely hymn to a rainy evening beneath the glow of a (now-vanished) coke works. Meanwhile, in portraying the times he's seen, Qualters renders moments in history as concisely, and intimately, as a graphic novelist might: In "Homestead" (1980), he populates a neighborhood scene with porch awnings, aimless kids and friendly-looking "Ken the Railroad Man," while falling leaves and an anecdote about Khrushchev visiting here in the 1950s comment on the silenced mill in the background.

At the same time, Qualters can be deceptively sly: "Kennywood Memories — Turning" looks carefree — until you notice, in the background, the bizarre counterpoint of the crazily rendered flames of Braddock's Edgar Thomson steel works. The cheerful, seemingly family-friendly "Kennywood Memories — Kiddieland" bears the legend "Eros in Kiddieland," and foregrounds a young boy holding a phallic red balloon, while the images bordering the central scene include a naked woman. 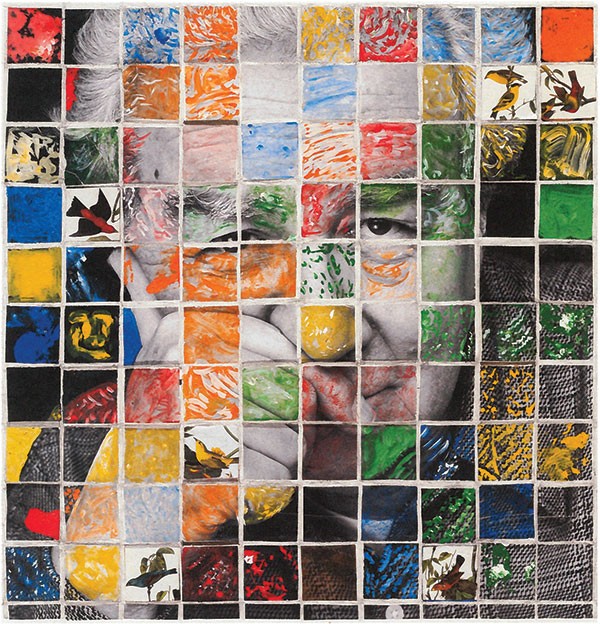 But if there's more to such paintings than mere nostalgia, there's also more to Qualters than such paintings. The majority of the exhibit's works are from the past 20 years, when Qualters has, arguably, done much of his best stuff, much of it lacking any explicit Pittsburgh identifiers (even if the imagery is rooted here). In 2011's gorgeous "Persephone," for instance, he depicts the goddess asleep underground, on the verge of awakening, with color pulsing through the snowbound, white-and-gray winter landscape above. "The Blue Rider" (2006-08) finds a young boy awakening in his bedroom to a surreal, Ferris-wheel-shaped vision of belching mills, monumental buildings, a painter at work and the mysterious titular cyclist. "The Night Watchers" (2008) exemplifies Clark's Autobiographical Mythologies characterization of Qualters as "a historian of the momentary," with its chromium-red valley-town sunset echoed in the window of a naked woman two adolescent voyeurs are calmly ogling.

These later paintings are often full of weirdness, surprise and fun. The wonderfully bizarre "The Old Men's Dream" (1994) puts some guys on a rooftop with an antic little red devil, overlooking a snowy streetscape filled with both recognizable signage (like the state lottery) and mysterious, ghostly, box-shaped faces apparently on the march. "The Dance" (2013) finds four naked women, and another in her underwear, posing anomalously amidst elderly couples dancing in what might be an old union hall. And who are those pedestrians in 1999's "Orangutan Dreams" who fail to notice not only the naked, red-haired woman in their midst, but the amiable orang standing next to her?

Interestingly, only one work in this show predates 1978, which Clark cites as the year Qualters began adding text to his paintings. In recent years, however, he's seldom included text, leaving viewers more leeway to interpret his images, and the pleasure of participating in the creation of their meaning.

In Autobiographical Mythologies, veteran curator Clark notes that in art circles, Qualters is often marginalized as a "regionalist." And in fact, it's been four decades since he's had a solo exhibition outside Western Pennsylvania. Clark questions the validity of "regionalism" as a category, but also defends Qualters against the label, in part because of the universality of his themes.

Indeed, while Qualters' paintings are deeply evocative of place, they're also amazingly big-hearted; poignant; and, at times, weirder than most things out there. But it's also true that while his concerns are universal, they're not as all-encompassing as those of, say, Brueghel, who's enough a hero of Qualters' that he is depicted in several of these paintings. That Dutch master, for instance, routinely depicted base human folly, something it's impossible to find in Qualters' work. Qualters' imagery can be dark and gloomy, as in "Labor Day 1985," his ironically titled image of the bombed-out J&L plant; it can be heartbreaking on matters like the death of his wife, as in "Key for a Life"; but it's never really grim, let alone excoriating. (That suited old man clutching money in 1995's "Allegheny County Jail," presumably profiting from human misery, is the exception that proves the rule.)

Rather, even when rendered in visionary color, Qualters' is the drama of the mundane: Though a few of the people in his paintings cavort, or pose for the viewer (like the funny fat kid in "Kennywood Memories — Who"), most simply stand, loiter, stroll. In most of his city scenes, the pedestrians are distracted, lost in their own thoughts. A plurality of his work depicts life as most people live it most of the time.

When you visit Robert Qualters: A Life, leave 30 minutes to watch "Bob Qualters: The Artist in Action," Joe and Elizabeth Seamans' terrific portrait of the artist as an old man at work in his Homestead studio. The film, which screens from noon-3 p.m. daily, illuminates Clark's summation of Qualters as "a contemporary flaneur and raconteur interested in the human condition as filtered through his own experiences in the city he chose to call home."