A rising-star choreographer world-premieres her latest at the Kelly-Strayhorn.

"The dancers express pure joy and desire, shedding all constraints and wearing the skin they are in." 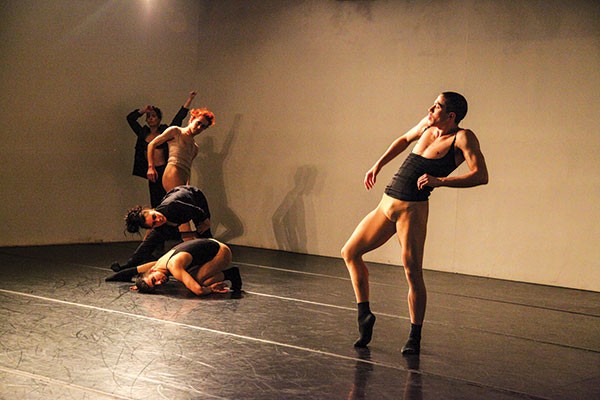 When choreographer Sidra Bell began work on garment during a residency at the Kelly-Strayhorn Theater last July, she thought it would take one of two directions: romantic or violent. It took neither. Instead, she focused on the idea of "being in one's own skin" and how we wear that like clothing.

On March 7 and 8, the Kelly-Strayhorn presents the world premiere of garment, by Bell and her company, Sidra Bell Dance New York.

Bell has a growing international reputation, but she's also a regular on the Pittsburgh scene. She has created works for Point Park University's Conservatory Dance Company and the now-defunct August Wilson Center Dance Ensemble, and has an upcoming piece for Reed Dance. Her globe-spanning résumé notwithstanding, the 34-year-old choreographer says she had no thoughts of premiering garment anywhere but Pittsburgh and at the Kelly-Strayhorn, where the work was funded and created.

"I feel privileged and lucky to create and perform works in Pittsburgh," says Bell, by telephone from New York. "I think Pittsburgh is really special in the way they embrace new ideas in a trusting way."

Bell says she explores a host of themes in garment's 15 "episodes," including an improvised episode titled "Unfettered" in which, Bell says, "the dancers express pure joy and desire, shedding all constraints and wearing the skin they are in well."

Another episode, about appropriation and recurrence, finds Bell referencing the dance works of the late German choreographer Pina Bausch, especially in the company's use of gender-shifting costuming.

"I like the idea that things keep re-occurring of which we can be or not be aware," says Bell. "Clothing can be one of the big signals of [memories]."

Bell's past works have revolved around fantasy, distorting her dancers' physical features via makeup, wigs and garish costumes. With garment, she says, she wanted to take a more neutral approach to the overall look. Still, like her other works, garment will no doubt push the boundaries of the movement qualities of dance — as well as societal comfort.

"I like creating an event with my works, not just a dance piece," says Bell.