A review of the PCA's Emerging Artist of the Year Show

We expect a lot of choices these days, and Mia Tarducci Henry supplies them

MIA TARDUCCI HENRY: INSIDE AND OUT 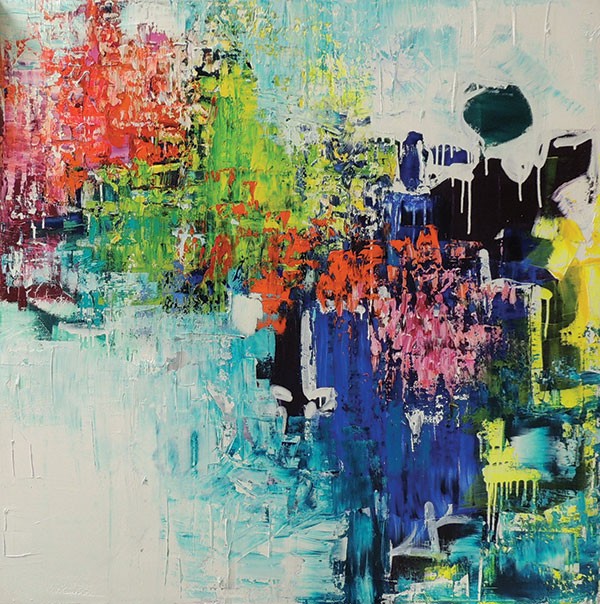 Mia Tarducci Henry has found room to move in the genre of gestural abstraction. For Inside and Out, her Emerging Artist of the Year exhibit at the Pittsburgh Center for the Arts, she chose to explore new directions, counterbalancing the primal goo of oil paint with concepts that push at the limits of painting. The results feel fresh without looking entirely unfamiliar.

Henry has been regularly exhibiting her work in Pittsburgh and elsewhere for the past several years. (She's also director of the Mine Factory gallery, in Point Breeze.) As with much recent ambitious abstract painting — i.e., painting that aspires to do more than serve as decoration — Henry's work is based in the gestural and expressive rather than the geometric.

Henry's canvases are thick with paint and heavily worked, often combining brushwork, impasto, scraping, dragging and overpainting. While they can look disorderly at a glance, upon closer examination they feel worried over, honed to a resolution rather than the residue of reckless abandon. Within each painting, there is usually a consistency of mark-making and technique. The tone of the paintings often feels retro-modern — as opposed to modern — with echoes of Joan Mitchell, Jean-Paul Riopelle and early Philip Guston. But the keyed-up color is thoroughly contemporary, glowing as intensely as a flat-screen television. Abstract painting often seems as constrained as the blues, and as endlessly mutable, but those sources in modern painting ground Henry's work in the past without trapping it there.

Henry's work is contemporary, or postmodern, in the way that virtually all art now is: exploratory, conditional, provocative and open to interpretations that don't necessarily align with the artist's intentions. Her work builds on the renewed vitality of abstract painting since Gerhard Richter began to squeegee paint onto canvas in 1980, producing gorgeous pictures that simulated expressionism and felt emotional in a non-specific way. A door was opened as many painters acknowledged that abstraction is not direct expression but rather an imprecise form of representation, employing colors, shapes and marks to evoke feelings.

We expect a lot of choices these days, and Henry supplies them. The paintings strike off in different directions while still cohering. Some have an all-over quality, such as the briny "in the deep," while others, such as "out of the light," are carefully constructed compositions. Those directions and more are pulled together in "the ride," a 60-foot long tour de force incorporating all of her favorite techniques. As with all Henry's paintings, "the ride" is impressionistic as well as expressionistic. Oriented along horizontal and vertical axes that can seem geologic or human-made, it suggests a panoramic landscape or cityscape viewed through a "special effects" filter. Then there are the 3-D elements. The painting "layers" is paired with a similarly painted plaster figure crouching before it, possibly forlorn or exhausted. "color coded," a hybrid of furniture and minimalist sculpture painted in precise bands of color, fills some of the space between paintings, contrasting in form while mimicking their colors.

Actually, this exhibit feels like two exhibits: the abstract paintings and, in a separate room, 3-D accompaniments and theme-and-variations on pharmaceuticals. Both "24 flavors" and "100 pill bottles and counting" echo Warhol's grid of Campbell's Soup varieties, though here the flavors include Prozac, Wellbutrin and Zoloft. Arrayed on the wall, the paintings make a dramatic presence. Scattered throughout the room like so many chemical drums are giant pill bottles, and a selection of jumbo-size pills are suspended from the ceiling, their intense colors evoking the emotions they are designed to suppress. While representing the variety and quantity of mood-altering drugs available, the artwork doesn't editorialize beyond presenting them as a somewhat alarming force to be reckoned with.

I remain unclear as to what exactly the Center for the Arts' "Emerging Artist of the Year" and "Artist of the Year" designations are meant to connote, beyond the stated "significant creative contributions." There are nominators and a selection jury, with some overlap, I gather, though it's about as transparent as a Super PAC. Although the awardees sometimes seem rather arbitrary, the choices rarely strike me as serious missteps. In the case of Mia Tarducci Henry, I found the choice somewhat unexpected yet sound. And Henry, impressively, took the opportunity and ran with it, which is a whole other matter, as the artists are selected on the basis of their previously exhibited work, which is not typically included in the exhibit.