What makes the book so interesting is its dimensionality 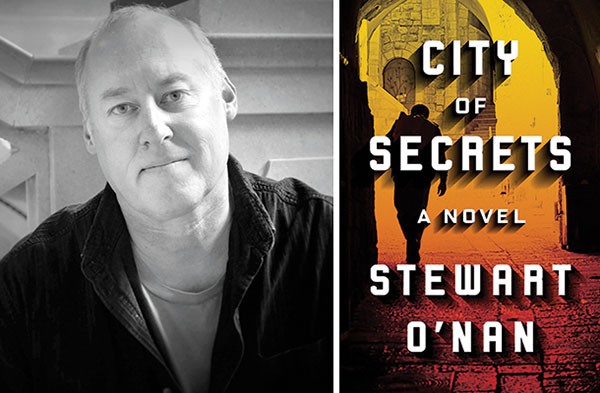 Back in 10th grade, Mr. Wells made us copy passages from Thomas Hardy’s novels into our exercise books, as if the physical act of rewriting might instill the artfulness of those words into our minds. Today, a teacher like Mr. Wells could do the same with the novels of Stewart O’Nan. His sentences are clean, hard, and without agenda — the kind of language worth emulating.

And the characters in this prolific Pittsburgh-based author’s latest novel, City of Secrets, do not waste their words or thoughts. This book is cast in a prose of movement and action, which is an effective conceit for a tale of espionage and intrigue.

The story is based on events in post-World War II Jerusalem under the British Mandate, and O’Nan’s historical veracity is scrupulous without being overbearing.  The protagonist, Brand, a Holocaust survivor, is now working as a cabbie, so he sees his world like a cabbie. By the end of the novel you can almost draw a map of the city based on the many streets and landmarks he observes. But O’Nan evokes an even deeper impression of British-occupied Jerusalem, the way Lawrence Durrell evokes the city of Alexandria in his novels; by immersing the reader in the particularity of a few characters, he captures a rich sense of the space and time surrounding them:

The very stones were secondhand, scavenged and fit back into place haphazardly, their Roman inscriptions inverted. It was the rainy season, and the walls were gray instead of golden, the souks teeming with rats.

To O’Nan’s credit, he does not get bogged down in the changing and multifarious political alliances that occurred during this period. Instead, he focuses on the complicated romance between Brand and his fellow conspirator Eva, who prostitutes herself not only to make her living, but to gather information for the Haganah underground movement, for which they both ultimately work.

Although City of Secrets is a spy novel, it’s really a story of loss, and how people, under the most stressful circumstances, deal with it. What makes the book so interesting is its dimensionality. The two major characters each lives three lives: the superficial day-to-day cover life of a meaningless job, the below-the-surface life of a terrorist-cell operative, and on the deepest level of psychic truth, the existential life of despair. As Brand remembers his former wife, who died in the concentration camps, he realizes, “After Katya, whatever happened to him was nothing. The world was not the world.”

Ironically, it is only in that deepest realm that Brand and Eva can really connect with each other. This sense of dark freedom makes Brand such an interesting character, and allows O’Nan to open up greater possibilities in the plot, when a lesser writer might have constructed a more predictable narrative.

In a word, O’Nan’s style is cinematic. His language is visual and evocative. The sentences are always purposeful: He keeps the action moving, because the language is moving. At times, especially in the opening chapters, the writing can be simple, like film noir. What you see is what you get. But mid-way through the novel, as events accelerate, he opens the cage of his prose and lets the words fly free. For example, after Brand recounts a long series of memories, and comes out of his reverie, O’Nan writes, “With the sun, the tourists were back, and the days dragged, one snapshot after another.” Here the author achieves a brilliant double trope, simultaneously evoking the torpor of Brand’s superficial existence and the lusher world of memories that are what truly nurtures him, allowing him to survive.

But most of all, O’Nan gives us a tremendous lesson in human nature. In how to tell a compelling story about adversity that is actually motivated by hope, not sentimentality. And in this age of the inflated novel, when tragedy has become a new kind of pornography, we find nothing gratuitous in City of Secrets. There is a lot many novelists today could learn from Stewart O’Nan. This is definitely a writer worth emulating.