Mark Neville’s exhibition London/Pittsburgh, now at the Silver Eye Center for Photography, is a tricky one to figure out. Neville is a London-based photographer who documents contemporary society in vivid, candid images and portraits. In 2012, he was commissioned by The Andy Warhol Museum for its Factory Direct project, in which artists were placed in residencies in area factories and subsequently created works generated by that connection. Neville produced Braddock/Sewickley, a slideshow installation of 50 images. The work focused on the two boroughs of the title and how the population of each has been affected by the steel industry, either benefitting financially from its profitability or existing as human fodder for its machines. Works from that project were later paired with works from “Here Is London,” a 20-image photo essay commissioned by New York Times Magazine, shown first in England and now here. 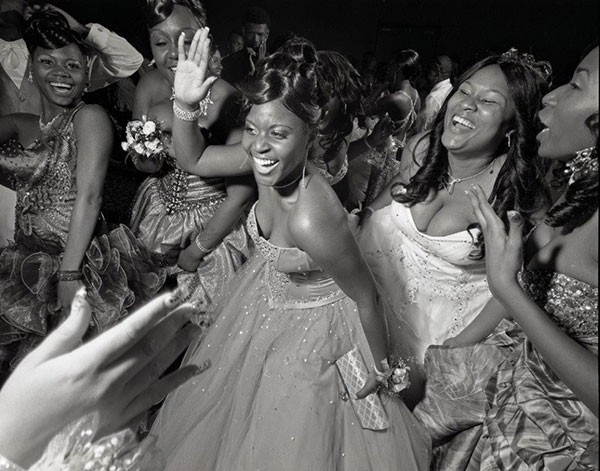 Dance the night away: “Woodland Hills High School Prom No. 3,” by Mark Neville

It is tempting to examine this show not in and of itself, but in relation to the books that provide a more comprehensive study of Neville’s work, particularly London/Pittsburgh. The temptation becomes harder to resist when considering the limited number of pieces on view: just a dozen, due to the large scale of each print and the gallery’s intimate confines. The books have so much more material to peruse in search of a deeper personal immersion into the worlds into which Neville has plunged. Yet the exhibit is meant to function autonomously, the bound volumes serving (within this context) as an adjunct to the show, rather than the show functioning as a sneak peek preview for the published product.

Neville investigates class, status, wealth, poverty and race, often by juxtaposing the haves and the have-nots, regardless of which side of the Atlantic he’s shooting. While the gallery offers a small pamphlet with the most basic of information on each work, there are no wall placards tipping us off to who we’re looking at and where, instead requiring us to ferret it out ourselves if we so choose. Only a couple of photographs indicate their specific setting. One of these is perhaps the show’s most riveting piece, in which a man sits wearily on a red brick porch, U.S. Steel’s Edgar Thomson Works looming behind him. Both are smoking. Everything is worn and tired and rusted and eroded, but nothing is quite finished yet, and you’re not sure whether the surety of continuance is promise or punishment. In another photo, while a gaggle of boisterous youths and beleaguered adults reveals nothing of the image’s origins by the environment in frame, they seem unmistakably British, especially the lad dominating the shot and capturing our eye, for whom the term “cheeky” could have been invented.

In some instances, Neville’s subjects pose with self-awareness; in many, they’re caught in the midst of engagement with something other than the camera. Often, the latter means they’re on the dance floor. Six of the images are devoted to these jampacked, throbbing, sweaty spaces. This is somewhat curious, as that number is half the total of works on view. That veers toward overkill in a show not specifically composed of images of dance floors.

It’s apparent enough why one might gravitate toward including so many such shots: When poking at class distinctions, racial privilege and economic disparity, on their respective dance floors, the contrast between one group and another is glaring. Taking an image of a posse of moneyed London bankers and brokers glowing golden with affluence and setting it catty-corner to a now-shuttered South Side nightclub is irresistible, if maybe a little easy. Forgivably so: In the twin seas of writhing humanity — one with platinum jewelry, platinum cards, expensive haircuts and bespoke suits, the other with oversized gold trinkets, pockets full of cash, cheap tattoos and wearied Spandex — each features a red-dressed Aphrodite standing tall front and center. But we don’t need four more shots of clubs and proms and raves, and we feel a little cheated that we were denied more range when presumably it was available.

Reaching the end of this brief journey through London/Pittsburgh, we’re left moved, thoughtful, intrigued, but not satisfied. One way to look at this show is that it’s incomplete and doesn’t reach fruition. With a chaser of a glass half-full, we can regard this exhibition as a door cracked ajar, with more to be yielded if we’ll do the work of pushing it open to look further.