Coburn explores a range of expressions, but one key here is his subjects’ quality of vision. 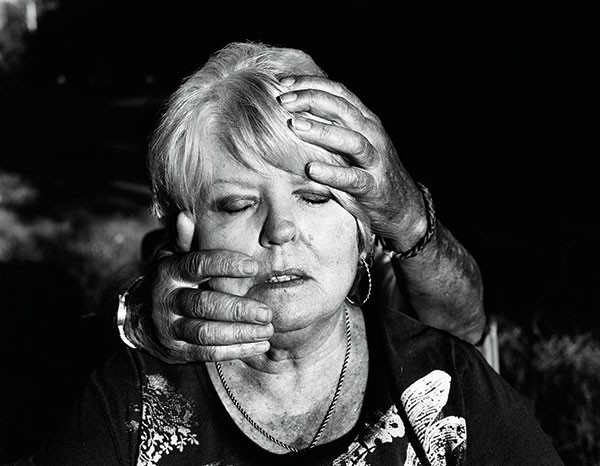 THE HEREDITARY ESTATE and HOMO BULLA

continues through July 30. Silver Eye Center for Photography, 1015 E. Carson St., South Side. 412-431-1810 or silvereye.org
If Daniel W. Coburn’s The Hereditary Estate suggests a family album from somewhere between hell and purgatory, it’s purely intentional. The exhibit at the Silver Eye Center consists of 18 black-and-white images excerpted from a book project the Kansas-based photographer undertook to rewrite his family’s erased history of suicide, domestic violence and substance abuse.

Most of the photos depict lone individuals. Some, like the old woman in “Judgment Veil” — the top half of her face lost in the veil’s shadow — seem in distress. Others, like the middle-aged man in “Panoptic Stain,” his eyes covered by the images of two oversized, overcosmeticized eyes torn from a magazine, are creepy. And a few images are ambiguously unsettling, including “Fare for the Ferryman,” in which an adolescent girl reclines in a bed in a sunlight room, coins gleaming on her eyes, and “The Long Breath,” whose subject, a young boy, stands outdoors with a transparent plastic bag over his head. “Resurrection” employs a bedsheet to suggest a ghost, while “Exorcism” depicts drunken release.

Coburn explores a range of emotions, but one key here is his subjects’ quality of vision: The eyes of all but two of them are obscured, distorted or simply covered. The two exceptions are the bedraggled middle-aged man in “Dad’s Authority,” casually confronting the camera while scratching his temple with a revolver, and “The Matriarch,” whose eyes are highlighted in a band of sunlight, but whose reclining posture is helpless and exhausted. This “eyeless” motif is less prevalent in Coburn’s book (available in-gallery), which also incorporates repurposed found photos. But it’s nonetheless a clear throughline for a show that, through potent visual metaphor, damns the practice of denial.

Hereditary Estate is paired (in Silver Eye’s back room) with Homo Bulla, Megan Ledbetter’s “study of surfaces and life cycles in the American South.” As a series, the 15 black-and-white images feel scattered, subjects ranging from girls swimming to an onion skin arranged on a black field. But many of the Chattanooga, Tenn.-based photographer’s individual images are strong, including the portrait “Untitled (Reece),” “Untitled (cow fetus)” — its fleshiness glistening inside a grubby, tipped jar — and “the smallest and largest of the forty-six chicken hearts,” each heart inscrutably encased in a seed pod jammed into chickenwire, in close-up.