The menu offers a variety of approaches to the size, format and formality of one’s meal, from tapas platters to a four-course, fixed-price chef’s table 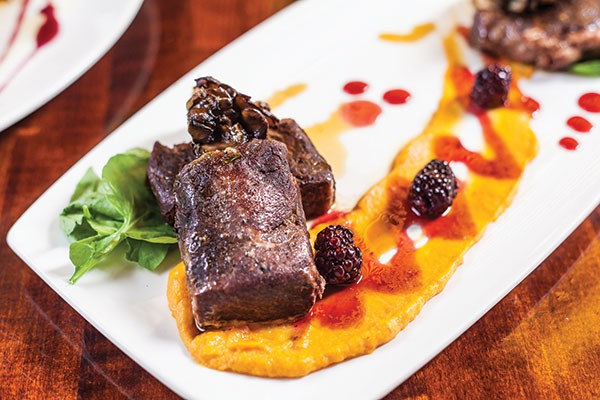 Sonoma Grille was a pioneer in the Cultural District dining scene when it opened a dozen years ago. As the street-level restaurant in the Downtown Marriott Hotel, carved out of historic buildings to serve the nearby convention center, Sonoma focused on the wines and contemporary cuisine of Northern California at a time when fresh-local-seasonal was still a dubious experiment around these cold, gray parts — not, like now, when it is the slogan of the trendy gastropub on every corner.

Sonoma Grille recently revamped its concept and menu, although the decor is largely unchanged from its original, perhaps overly literal, evocation of a Napa winery courtyard. The high ceiling, although comprised of black-painted acoustic tiles, allows for plenty of noise: On a half-full midweek evening, the dining room was notably loud.

In its original incarnation, Sonoma emphasized its wine-pairing focus by organizing its menu according to oenophilic terms, such as “spicy, muscular and bold.” Possibly allowing that Pittsbughers have become more sophisticated wine consumers, the new Sonoma has abandoned this trope in favor of a straightforward kitchen menu accompanied by a wine list. Recipes have been brought up to date with kale and house-made pickles and jams, but what makes this menu most au courant is its presentation of a variety of approaches to the size, format and formality of one’s meal. In addition to traditional entrees, we find tapas platters for two, mixed grill, sharable snacks and small plates, family-style meals and a four-course, fixed-price chef’s table. The overall tone is international and refined.

The chef’s tapas for two provided a curated tour of the menu and a surprising amount of food for the money. Served on a curved oak-barrel stave — a creative way to avoid crowding the table with dishes — it offered extra-small portions of five snacks and small plates. Baked oysters were spicy and a bit creamy, yet the brine just came through. Silver-dollar-sized kimchi pancakes were a great idea, but the flavor was wan and the texture was heavy and dense. Pork belly — basically a piece of bacon — was not sufficient to stand up to sweet, fruity jam, plus the relatively sweet pickled onion. Foie gras was whipped to an ultra-light consistency, but its flavor also took on too much of a fruity note, possibly from brandy. The surprising hit of the chef’s tapas was tater tots, big ones with creamy interiors, crispy-crunchy exteriors and savory morsels of short rib on top.

After that, we each ordered an entrée. We couldn’t quite identify the cut in the “Beef Butcher’s Roast,” but it was wonderful: well-browned nuggets that were moist inside with robust beefy flavor and, despite a stringy appearance once cut, a tender texture. Accompanying abalone and baby shiitake mushrooms were heavily browned as well. For the former, a large, multi-lobed mushroom, this created a pleasing textural contrast, but for the latter, it left them mostly dried out. There was puréed squash on the plate, as well as thickened jus and a sort of chimichurri; it could have been busy, but the flavors came together well. 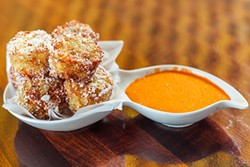 Unfortunately, this wasn’t the case for the guinea hen with pickled red onion, frisée, sorrel pesto, blackberry jus and summer-squash beignet. The onion and frisée made for a nice little salad, but the poultry was lacking in moisture and, consequently, flavor. The sorrel pesto mingled with the blackberry jus for a flavor that was simultaneously fruity and bitter, and the squash beignets were dry.

We revived them, at least, with the delectably soft, creamy herb butter that had come with our bread basket. Filled with a variety of house-baked breads, including some slightly sweet, almost cake-like ones, this was one of the highlights of our meal and certainly among the top bread baskets we have had in a restaurant.

Service was friendly and knowledgeable, but, despite the aforementioned half-full dining room, excruciatingly slow. To Sonoma’s credit, the staff apologized in advance of any complaint on our part and backed their word with complimentary desserts. Did we like chocolate, they asked. Chocolate mousse and mirror cake, the latter named for its shimmering glaze, were both decadently delicious. They accomplished exactly what they were intended to, which was to sweeten a potentially sour situation.

After a dozen years, Sonoma Grille was due for an update, and we liked the selectivity of this one. A complete overhaul might have lost Sonoma its niche as a safe, sophisticated but not stuffy choice among Downtown dining destinations. Some things we tried were better than others, but the best set a high bar. The menu offers plenty of choices, and the overall experience was polished and professional.