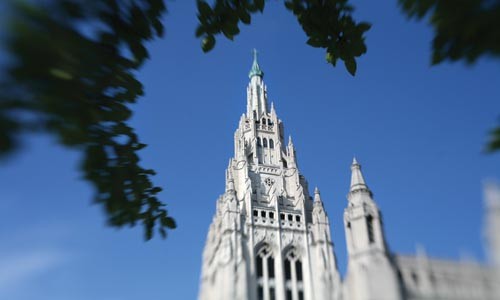 Land the sleigh on a pitched roof? Stuff a round guy down a tight chimney? Christmas and architecture often seem utterly incompatible. The Nativity, for instance, took place in a manger -- not really a building at all. Likewise, as great as all of those decorations are, their profusion only suggests that conventional buildings of the present day are poorly suited to convey piety or festivity.

Churches, of course, are the notable exception, invariably designed to enhance religious faith, with Christmas as a key event. And no American architect of the 20th century designed churches with greater distinction than Ralph Adams Cram. Unlike most of his contemporaries, Cram felt that religious faith should be a component of all architecture. The Christmas season in Pittsburgh affords an especially appropriate occasion to reconsider his work.

Although Cram, a New Englander, was born and raised a Unitarian, he experienced a dramatic conversion to Anglicanism at a midnight Mass on Christmas Eve in Rome, in 1887, and architecture was a crucial element of his new faith. "For now," he wrote, "what before had been no more than interesting archaeology and abstract architecture ... now related itself to life in its splendid continuity and significance."

Curiously, while the church, San Luigi de Francesca, is a Baroque structure, Cram conducted his budding architectural career from that moment onward with the firm conviction that pious Christian belief was inextricably intertwined with Gothic architecture: "The measure of the Gothic is absolutely organic; it associates itself with, takes hold on, the universal laws of life itself."

Cram worked earlier in his career with the similarly talented but less pious Bertram Goodhue, for whom the Gothic was more purely esthetics and technique. Their early works, such as All Saints Church in Ashmont, Mass., of 1891, adapted with some specificity from medieval English parish churches. As he matured, Cram felt more comfortable developing a style in which details from different eras and geographies of Gothic architecture could blend more seamlessly into a coherent whole.

While Cram's St. Thomas Church, on Fifth Avenue in Manhattan, begun in 1906, is more celebrated, the architect himself actually had a different favorite. "The best thing we ever did or shall do," he wrote to his wife in 1907, was Calvary Episcopal Church at Walnut and Shady in Pittsburgh.

When he changed his mind later, it was not because of the work at New York's massive St. John the Divine. This sizable structure was a commission taken over from Heins & LaFarge, which, though stunning, is still incomplete today. Rather, Cram believed that he reached his career apogee at East Liberty Presbyterian Church, which he illustrated as the frontispiece to his 1936 biography, My Life in Architecture, one of his numerous lucid books.

"This was one of those opportunities that come no more than once in a lifetime, and is the sort of thing an architect sees in his dreams but hardly hopes for in realization; a church of cathedral size and general design, cruciform, with a great chancel and lofty tower and spire over the crossing; built of solid masonry ... furthermore, an expressed desire on the part of the donors that this should be the finest example of a church building the architects could accomplish and that money could buy."

Cram had the misfortune to finish East Liberty Presbyterian in the late 1930s, when Modern architecture was on the ascent in the United States, so his real masterpiece, though cherished by his advocates, was underappreciated by architectural publications. Biographers such as Ethan Anthony meekly protested that "the medieval heyday should not be discounted because it was four centuries in the past." But perhaps the real heyday was 1925, when Cram was declared Man of the Year by no less than Time Magazine.

If Cram's era passed, that is partly because his ideas about the close correlation of architecture and faith seem a bit quaint to contemporary critics. After taking renewed and enhanced interest in his work, I'm still as Jewish as ever. (Cram was, happily, appreciative of the Jewish religion). But the relationship between religion and design is never a simple one. Cram knew that his works would far outlast their architect, giving subsequent generations the opportunity to take inspiration, religious or artistic or both, from his work -- a compelling touchstone for eras when the two seem to be separated.